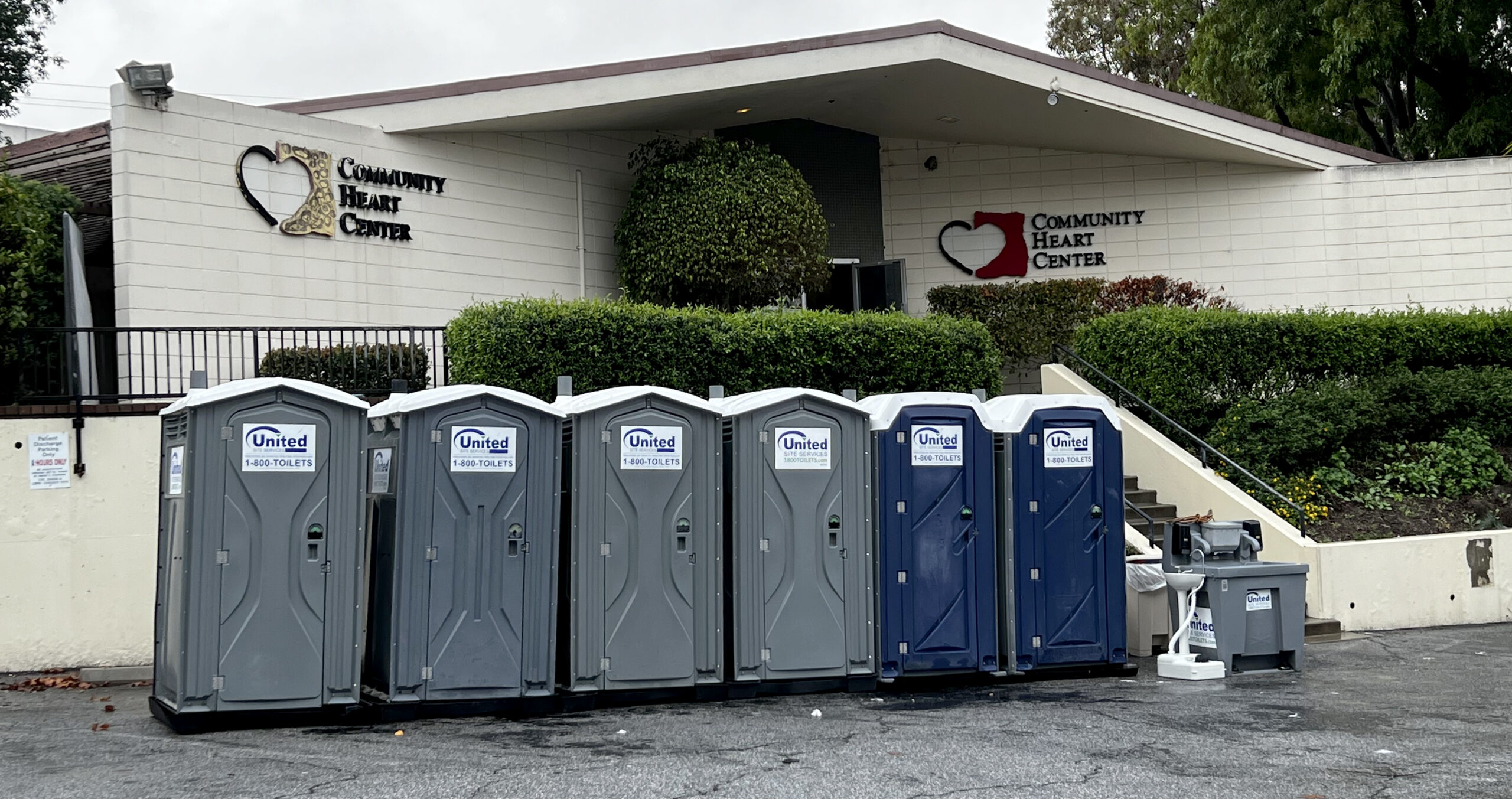 Almost all of the toilets at Long Beach’s winter homeless shelter are unusable, and tenants are being bused across the city to take showers after water was shut off to most of the facility because of persistent plumbing problems.

The shelter opened a little over two weeks ago at the old Community Hospital campus in East Long Beach, and city officials were originally optimistic that the new location meant clients would have on-site showers and private bathrooms for each room of three or four people, amenities other winter shelter locations typically haven’t had. But those hopes were quickly dashed by costly sewage line backups and flooding that started days after the shelter opened.

Crews shut off water to most of the shelter as they struggled to pinpoint the problem, and it probably won’t be turned on any time soon, according to Paul Duncan, director of the Long Beach Homeless Services Bureau.

“It is likely that we will be needing to use port-a-potty going forward for the site,” Duncan said Wednesday during a meeting of the city’s Homeless Services Advisory Committee.

Complicating the situation is confusion over what’s causing the problem and whose responsibility it is to shoulder the burden of fixing it.

The Community Hospital property was owned by Long Beach for decades, but in October, the city transferred ownership to MWN Community Hospital LLC as a means of reimbursing the company for losses it incurred trying to reopen the site as a working hospital.

At the committee meeting Wednesday, Duncan laid blame on a backlog of maintenance at the facility. Despite testing the plumbing before moving people into the shelter, it hasn’t been able to handle use from the 70 to 80 residents staying there, Duncan said.

Because plumbers couldn’t locate the clog or determine whether it is in the city-owned sewer system or Community Hospital’s pipes, it’s unclear whose responsibility it is to fix it, Duncan said in an interview with the Long Beach Post.

He said the next step would be excavating pipes to find the problem, but that would displace residents at the shelter, so it likely won’t happen before it closes at the end of March.

MWN, however, disagrees with Duncan’s assessment.

The plumbing problems were caused by shelter tenants flushing things like towels, hats and other unsuitable items down the toilets, according to the company. MWN spent tens of thousands of dollars on emergency repairs to fix the issue, and the plumbing is now functional, but the company is reluctant to turn the water back on without some communication from the city about how similar problems would be handled in the future, according to the John Molina, MWN’s primary investor.

Molina said he’s frustrated by what he sees as a lack of urgency on the part of the city to address the plumbing problems, which he anticipates will be ongoing, or respond to the company’s request for more shelter staff at the hospital, who could escort clients to work restrooms or showers elsewhere in the complex.

Long Beach is paying MWN over $45,000 a month to rent the shelter space, but with the plumbing issues and other unforeseen expenses, the company is now in a position where it’s losing money on the agreement, essentially subsidizing the city’s shelter operations, according to Molina .

“Intentionally or unintentionally, they shouldn’t be taking advantage of us,” he said. MWN’s attempts to talk with the city about how the plumbing issues should be handled going forward have been ignored, according to Molina.

Caught in the middle of this disagreement are the shelter’s residents.

For now, they are still allowed to use one or two indoor bathrooms with running water, according to Duncan, but a woman living at the shelter told the Long Beach Post that the doors don’t lock, so most people are opting to brave the wind and rain to reach a bank of six port-a-potties down a flight of stairs from the shelter’s entrance.

“It’s really rough up here,” said the woman, who asked not to be publicly identified for fear she’d be asked to leave for complaining.

She also said bottled water is in limited supply, with shelter residents being given a styrofoam cup and told to use a drinking fountain that dispenses brown-tinged water. Because residents are not allowed to leave the shelter on foot, they have to be bused about 4 miles away to the city’s hub for social services, called the Multi-Service Center, if they want to buy their own water.

“Everybody here is complaining,” the woman said.

Similarly, residents who want to shower have to travel to the Multi-Service Center, according to Duncan, who said the city has used this method in previous years when winter shelter sites didn’t have showers or adequate bathrooms.

The private nonprofit contracted to run the shelter’s operations, First To Serve Outreach Ministries, didn’t respond to a phone call Friday morning, but Duncan said the organization was making bottled water readily available and had not found any issues with water from the drinking fountain .

Editor’s note: John Molina is also the primary investor in the parent company of the Long Beach Post. He is not involved in editorial decisions. For more information about the Post’s ownership, visit our transparency portal.