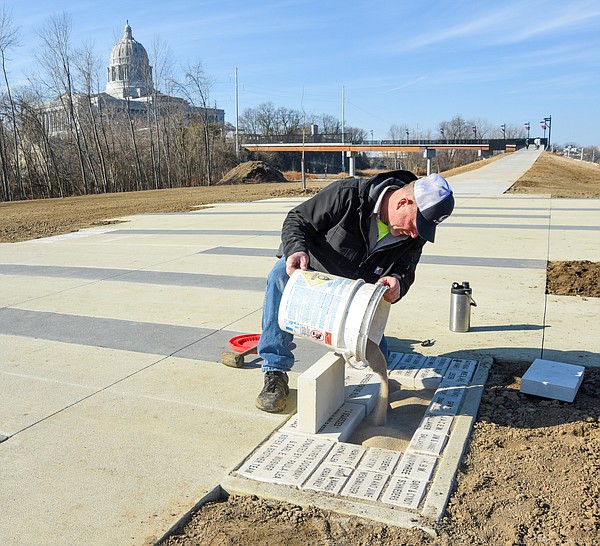 Mayor Carrie Tergin had two paving stones removed from a square on Adrian’s Island because they feared they looked too much like a Civil War memorial that the city council removed last year after weeks of controversial debate.

As a fundraising vehicle for the Bicentennial Bridge, people were able to buy pavers that run along the way on Adrian’s Island.

The 765 foot bridge, which spans the Union Pacific Railroad, connects the Capitol grounds with the 30 acre strip of land on the other side of the railroad track known as Adrian’s Island.

The bridge opened on Monday and gives access to the island. The crews are still working on elements of the park, but a concrete walking path is open with paving stones along part of it.

Two of the larger fundraising patches were removed from the trail on Thursday.

The adjoining bricks were bought by a city resident and engraved with part of the language on the Sterling Price marker, Tergin said Thursday.

The original Sterling Price marker on Moreau Drive said, “The Confederate Army, under General Sterling Price, turned from Jefferson City on October 7, 1864 to decide not to attack. This marker was replaced by Winnie Davis on April 6, 1933 Chapter Dedicated to United Daughters of the Confederacy. “

The United Daughters of the Confederation who purchased the marker have ties to the Ku Klux Klan, which ultimately played a huge role in the city council’s decision to remove the original marker.

In October 2020, the city council voted to remove the marker from their booth on Moreau Drive.

Edith Vogel of Jefferson City bought the paving stones and said her intentions had nothing to do with the original memorial.

“I was furthest from talking about the Confederate Rock, removed last year and bought by the Daughters of the Confederation,” she said Thursday. “I am a daughter of the Union, but I am trying to save the historical significance of this event because we have nothing but a replica of the plaque that I have on my private property.”

Vogel is the current owner of the former Camp Lillie, which was once a base for Union soldiers. In April, she placed a replica of the plaque from the original Sterling Price Marker on the property.

Vogel said she and some of her friends teamed up and bought the paving stones to understand the historical significance of Sterling not attacking Jefferson City.

“I am a descendant of GH Dulle, who was living at 800 St. Mary’s Boulevard at the time,” said Vogel. “He was ordered out by the Union Army and they took over his house. He survived. If they had decided to attack Jefferson City, he could have been killed and I might not be here. “

Tergin said she decided to remove the paving stones on Adrian’s Island because the message did not match the original intent of the paving stones and the council had already made a decision to use the language on the town’s property.

“I probably don’t have the last word and I’m sure my decision could be reversed, but I spoke with the donor about the concern before making the decision,” she said. “A big part of that particular message was that the council decided to remove the stone, and the paving stones in question relate to that stone.”

The goal of the pavers is to honor individuals and donors of the Bicentennial Bridge Project.

“I made the decision myself, based on the history of that decision, to remove these (words from city property),” said Tergin, “and to clarify the intent of the bricks.”

The paving slab purchase form will be updated to make it clear that the bricks are for names, she said.

“The original intent was for names,” she said. “Honestly, it’s something the committee didn’t necessarily think about to clear on the sheet, even though it should have been cleared afterwards … so the donors would know what the intent was. Usually donor bricks and pavers are for names. “

There was no review or approval process when someone bought a paver, she said.

The Bible verse John 3:16 is engraved on another paving stone in the square.

When asked if this cobblestone should be removed because it isn’t a name, Tergin said it was a good question. She said she would probably speak to the donor of that paving stone as well.

Vogel said city officials told her they would give her two more markers to use to honor someone in her family, but that was not her intention.

“I wanted to remind people who would go across that bridge and go down and look at the plaques that said there was no battle here in Jefferson City,” she said. “If you don’t want to see this, close your eyes or look away. … There were no specifications as to what was allowed to happen on the paver … otherwise I would have said: ‘Well, I won’t do that.’

“If you just want the names of the dead that I’m trying to remember, then I don’t want to go along,” said Vogel.

Tergin said she took full responsibility for the misunderstanding and that it was not noticed until the paving stones were broken in.

“I take full responsibility for ensuring that even when I proofread the donor sheet, I never thought of clarifying (they are for names),” she said. “I just assumed they would, because normally paver campaigns are for names. They are very small. “

Tergin said Vogel could put something else on the paving stones or get a refund.

Vogel said she plans to ask for a refund.

Parks director Todd Spalding referred Tergin on the matter; The President of the Parks Commission, Chris Leuckel, was not available for comment.

Crews Garage Alert: 4 Common Problems To Watch Out For