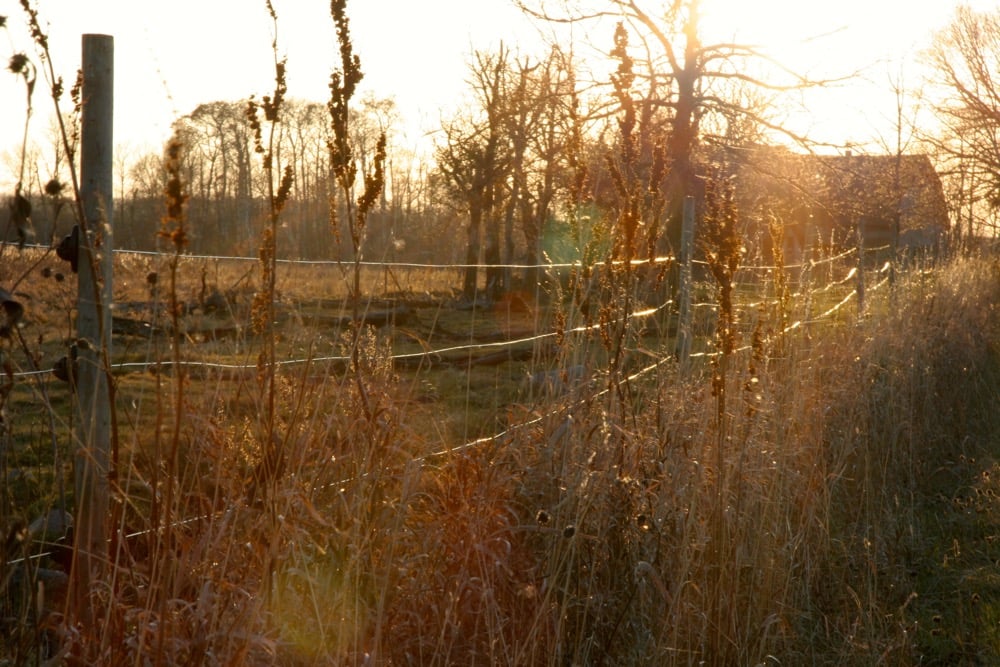 Steve Kenyon, a rancher near Busby, Alta., has been rotational grazing for a long time and bale grazing for more than 20 years, using electric fence. It’s a learning process to figure out what works best on your own place, he says.

“With most of my cross-fences, I’ve found it works best to have permanent electric fence. I don’t use as many temporary fences anymore because of the labor involved,” he says.

Labor is Kenyon’s highest cost, so spending more up front for a fence saves in labor later, he says. Years ago, he figured out that if he has to put up and take down a fence more than twice in the same spot, he might as well leave it up.

Kenyon doesn’t use insulators. In a dry climate, there’s no need for insulators if wire is touching dry wood, and avoiding insulators saves time when fixing fence in the spring, he says.

“When I was using plastic insulators, moose and deer walking through fences pulled them off, and I was constantly replacing lost and broken insulators,” he says. Instead, he uses two-inch barbed staples to fasten wire to a wood post. Usually his posts are dry, and he’s only powering a couple of miles of fence, as he only hooks up the paddocks currently in use, rather than the whole farm .

“I can still have seven kilovolts in my fence, even though when it rains this might drop to four. It still has some charge, and the cows are well trained and rarely touch the fence,” he says.

If you have a good charger, they don’t want to ever touch it again after their first encounter. If they learn about hot wires as calves — or curious yearlings — they will always respect it.

Kenyon has power through all his fences. “On a barbed-wire fence, I run power through the second bottom wire. When it’s dry, it works fine. When it’s wet there may be power loss and I might have to disconnect it. But the cattle already know that all my fences are hot and don’t touch them.”

“Many ranchers fail to actually test their ground, and just presume they have enough,” he says.

To test your ground, create a dead short in your fence — and ideally have less than 1,000 volts running on the line. Then use the fence tester to check voltage on the last ground rod in the series, Gerrish says.

“If there’s more than 200 volts on the ground, you need to add more grounding.” Gerrish suggests adding another ground rod 10 feet out and testing again.

“Keep adding ground rods until that final measure is less than 200 volts. If you have your fence adequately grounded, there’s almost no risk of grounding being the fail point.”

Another tip is to place ground rods strategically. “I found that if I can put my ground rod in a low area, next to a dugout or in a ditch where it’s always going to be wet, I get much better grounding,” says Kenyon.

He recommends using a relatively large fence but not too big. “I don’t use little cheap ones. I prefer a three to six joule fencer. With the three-joule fence, I can move around and usually get by with one ground rod; it’s adequate for that amount of power. If you get much bigger, you need more ground rods. If I’m moving fences around, it’s simpler to have just one ground rod,” he says.

“Normally the electricity comes out the hot wire, through the body, down to the ground and back through the body to the fence, making a complete circuit. Snow breaks that circuit; the animal doesn’t get much of a shock. In winter I can have a fence reading of seven or eight kilovolts, which should be a really powerful fence, but I can grab hold of it and barely feel it — because I’m wearing boots and standing on packed snow,” says Kenyon.

To deal with the snow, Kenyon uses a bipolar fence. The bipolar fencer can be used as a regular fencer in the summer, but it has two wires for winter fencing.

“One is half the pulse as a positive charge and the other is half as a negative charge. If an animal touches either wire, it still gets half a charge through the ground — right through the snow.”

But if they hit both wires together, they get the full charge and it eliminates the need for the ground, he adds.

“There is an economic threshold, however, on every pasture and situation, for how much labor you put into it versus the benefit you get,” says Kenyon.

For example, moving cattle 10 times a day is good for the country, but involves a lot of labour. Continuous grazing is on the opposite end of the spectrum, requiring little labor but causing the pasture to deteriorate.

“Somewhere in between those extremes is what might work best for you, for labor and equipment costs.”

Driving distance and number of animals are also factors when deciding how intensively to graze, and therefore how often to move cattle.

“In our operation, we have one pasture five miles away, where we manage 100 heads. This has different economics than the one that’s 20 miles away where we are managing 600 heads. Labor and equipment cost divide up differently, with more animals,” Kenyon says.

Terrain also makes a difference. Bush pasture, steep areas, hills and creeks make it harder to strip graze. Class of livestock also affects how you grace and set up the pasture. But electric fence gives you flexibility, allowing you to fence some places that you wouldn’t want to fence permanently.

“We are more able to tackle difficult terrain with temporary fence than in the past,” says Gerrish. “Once you have the basic techniques figured out, and the right tools in your tool box, putting temporary fence up the foot of a mountain isn’t that big a deal — as long as you are not doing miles and miles.”

Wheel lines are a tough irrigation system to grace around, as the fence tends to short out on the pipe, Gerrish says. Those situations require creativity.

“Other companies have similar testers that show how much electricity is going through the wire at that point, the direction of the fault and how much loss there is. A regular cheap fence tester only tells you how much power it has, but the Smartfix tells you which direction and how bad the fault is. This can save hours of labor trying to find the fault,” says Kenyon.

“Many modern energizers can be remotely turned on and off, which helps when fixing fence, but the combination testers can point the direction the short is and identify how much voltage is being lost. These cost more money but just one morning spent finding one or two shorts faster than you usually do will pay for it,” Gerrish says.

Kenyon suggests starting from the fencer and working away from it.

“Let’s say you check the fence right by your charger and it says there’s 20 amps of loss this direction, going away from the fencer. When you get to your first T, you test all three sides. Maybe the first side still shows 20 amps of loss, and then you test the other directions. Usually, one will be high and one will be low. So you know you don’t have to check the one direction; you go the other way. You just keep following it along, and every T you come to, you can check. It should take you right to the fault,” he says.

Kenyon knows what kilovolts his fence usually sits at and checks it daily. “It might be five kilovolts, and if there’s a change — if that pasture fence is at 2.5 — I know there’s a problem and can find and fix it.”

Only powering the pasture fences the cattle are currently using also saves time.

“There’s no need to power your whole farm because that requires more labour,” Kenyon says. “If there’s a fault I’d have to check 25 kilometers of fence, which takes longer, whereas if I just have to power two paddocks, there’s a lot less to check.”

12 Covered Deck Ideas That Will Elevate Your Outdoor Space