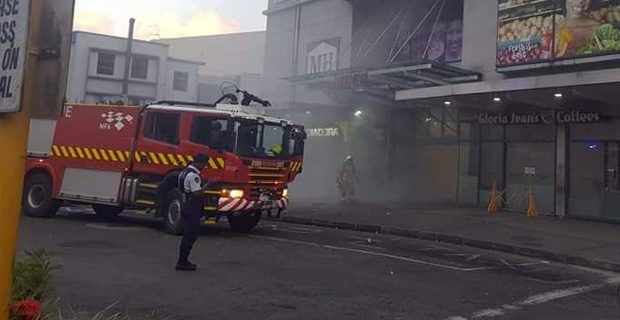 The team from the National Fire Brigade, which had processed an emergency call in the MHCC building in Suva yesterday evening, discovered that the engine of the central air conditioning system on level 1 had overheated and caught fire.

Manasa Lesuma, CEO of the National Fire Authority, says the fire triggered the sprinkler system installed in that room, which quickly put out the fire before it could cause further damage.

Lesuma adds that the Suva fire station was informed of the fire in the parking lot of the MHCC building yesterday evening at 7.15 p.m. via its fire monitoring alarm system and reacted immediately.

He says the team, with the assistance of MHCC technical staff, determined the origin of the incident when he arrived at 7:19 p.m., which was in a unit in the parking lot on Level 1 of the MHCC building.

He explained that the smoke produced in the course of the incident escapes through the ventilation slots of the central air conditioning system and triggers the fire alarm in the control room of the Suva fire station.

Lesuma stressed that the building’s fire protection system was effectively activated during the incident, preventing what could have been a major disaster.

Lesuma says NFA will continue to conduct its investigations to determine the cause of the fire.

He says the MHCC building is secure.

Fijivillage needs to receive a comment from Carpenter Fiji Ltd regarding the fire in the parking lot of the MHCC building.

Louis Vuitton The window designs of the rainbow project

Six Affordable Ways To Prepare An Older Home For Sale

BC weather: Access to air conditioning during extreme heat