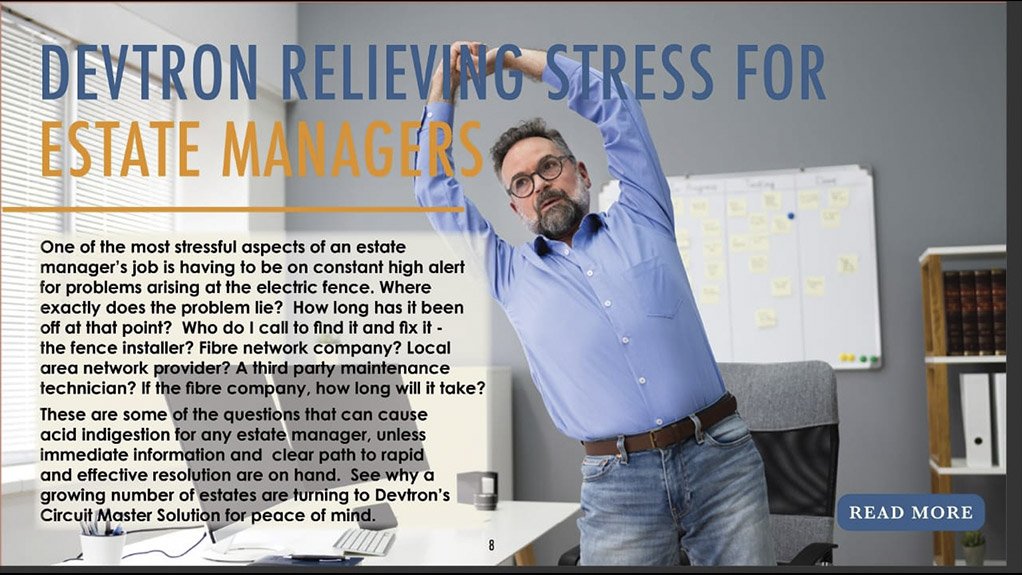 / MEDIA STATEMENT / This content was not written by Creamer Media, but is an accompanying media statement.

Security at the Assmang Black Rock Mine in the North Cape has improved dramatically since switching from a radio-based alarm monitoring and communication system to Devtron’s cloud-based Circuit Master solution.

Assmang (Pty) Limited mines manganese ore in the Black Rock Mining Complex in the Kalahari manganese field, which contains approximately 80% of the world’s known high quality manganese resources. A total of 3.6 million tons of iron and manganese ore are mined and extracted from Black Rock’s three separate mine shafts each year.

Security is critical to operations as it spans multiple locations and various activities, from earthmoving to transporting ore, loading and unloading, collecting mining equipment, and other on-site support functions.

Raynier Vorster, senior engineer at Thorburn Security Solutions, who provides security services to the mine, explains that the mine has expanded its exploration over the past five years, resulting in an exponential growth in the total business area.

Identify the weak points in the security system

“In 2019, the increased activity created a number of security challenges and it became clear that the existing security system had several shortcomings that needed to be addressed in order to improve security,” he says.

A key problem related to the mine’s radio-based alarm signaling system, which caused faulty communication and had extremely limited capacity for user notifications and control room support in the event of an alarm.

“The instability of radio communications has severely affected our ability to respond to security breaches,” Vorster explains. “Sometimes it took up to 15 minutes for the signals to reach the control room, and when they did, they often obscured the radio interference.”

The fence itself also had to be modernized, and the old utilities had limited capacity and features. There were no zone-specific alarm notifications, and the notification panel could not provide any support for possible action that could be taken.

Implementation of a reliable solution

Nemtek, who supplied the mine’s 60 km fence, was called in to help find a solution. The company has a longstanding strategic partnership with Devtron, whose Circuit Master solution has significantly improved the offering for its customers. The company’s managing director, Matthew Krinsky, was involved from the start to determine the needs of the mine. Working with the Black Rock Mine operations team, the four parties compiled a detailed list and understanding of the mine’s service and system requirements.

The decision was made to switch from a radio controlled network and communication system to the Circuit Master solution from Devtron, a cloud-based digital live-stream electric fence monitoring system that can be viewed from multiple locations at the same time.

The heart of the Circuit Master system is the highly developed and powerful 3G Devnet24 modem. Based on the same robust technology used in the banking industry, all perimeter and equipment data is captured and anyone connected to the system can monitor and optimize the effectiveness of the fence around the clock.

The old utilities were an integral part of the solution and were replaced by the latest high-tech and robust D-28 utilities from Nemtek, which are integrated into the Circuit Master software and can control and monitor two zones at the same time.

Benefits of the Devtron solution

The new system, which was installed within three months, has significantly improved Thorburn Security Solutions’ ability to provide effective security in the mine, says Vorster. Switching from one wireless network to GSM means that if one wireless network fails, the mine can immediately switch to another. Communication is clear and can be text-based, which avoids errors normally caused by radio interference, especially given the size of the mine and its diverse operations.

“Perhaps the most important advantage is that all of the alarm signals from 145 alarms located directly around the mine are now received in the control room within seconds as opposed to minutes,” says Vorster.

“We can pinpoint the exact unit and zone affected so that a technician can be dispatched quickly to fix the problem. Any assistance he needs is available in the control room, on a laptop or mobile phone – which in turn greatly improves the speed at which problems can be resolved. “

The electricity was also drawn from a solar system next to each generator, which saved costs and made the mines less dependent on electricity. By attaching the sensors to the solar modules, they can also be monitored by the Devtron system.

Because the cloud is based, information is backed up and secure so that if there is a problem with the control room computer, the system can be up and running the same day without any loss of information.

“This means that we have accurate information on hand at all times so that we can generate reports with whatever data we need if the mine ever requests it.”

According to Vorster, Devtron has become an integral partner in Thorburn’s safety measures at the mine. “We have had excellent service since day one. Matthew Krinsky stayed in constant touch with me throughout the design of the system so that the final design reflected exactly what we needed.

“They also offer reliable 24-hour support. If I call her with a problem, even if it’s the middle of the night, a Devtron support agent will stand up to resolve the problem for me.

“The system has remained stable since it was installed 18 months ago and can be operated in all weather conditions. I can only recommend the system to large locations, ”concludes Vorster.

The right way to repair and reapply eroded concrete