Pool companies have been run off their feet with demand despite price increases and labor shortages since the boom began.

Cameron Levick, chief executive of Plungie, a pre-fabricated pool company, said while their business was only four years old, their volume increased by more than 300 per cent in the 2020-21 financial year compared to the previous one.

Levick said the pickup in demand was driven by the appeal of having access to a pool even during lockdowns, while increasing property value.

“Broadly, if you’re building and renovating a home if you put a swimming pool in, you increase the value but also increase the number of potential buyers,” he said.

“People genuinely wanted to make a strong investment in their home. They may have had the cash because they weren’t taking expensive international holidays.

“It was part of a broader, ‘How can we make our home a resort and be happy spending time in it?’”

Sydney-based Mr Pools managing director Anthony Papadopoulos said families were trying to create an improved lifestyle at home instead of being able to go on international holidays.

“A lot of people were wondering how long [it would be before] they could travel, so they decided to spend money on their homes rather than the unknown of when they could travel again,” Papadopoulos said.

“We’ve had a boom from an inquiry perspective, but we’ve also been a lot busier because of the shortage because of COVID and the weather in the last year and a half. So, everything is even busier than it has been.”

Maroubra homeowner Christine Perry had a pool installed in November to enjoy with her grandchildren, in time to use it at Christmas. The compact plunge pool was chosen to fit in the available space. 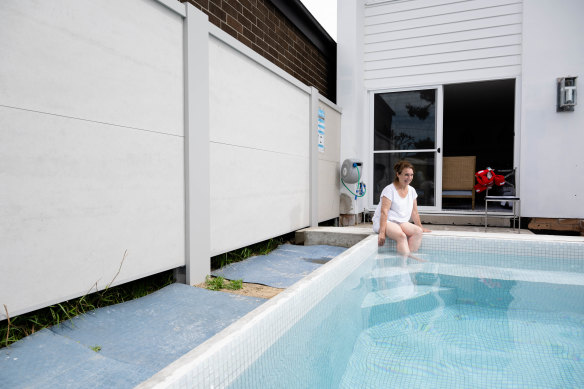 It was planned before COVID as part of a larger home renovation, but the pandemic meant the pool could be installed sooner because the family saved money from not going on holidays.

“This is the perfect pool for anyone who wants low maintenance, and just the perfect size to cool off,” she said.

Her installer, Peter Roberts, director of Pete The Pool Man, said demand had been high as homeowners invested in their properties, but staff shortages were a challenge for the industry.

This had put upward pressure on pricing, and some clients who had been surprised by the high costs of larger pools had turned to him seeking smaller alternatives.

“More people, families, are basing their decisions around their budgets,” he said.

Melbourne-based Blue Pools and Spas founder and builder Jean Michelet said while he is already booked out for next year, interest rate rises have started to bite the industry.

“We’re getting less leads … in the last few months and that’s a direct impact from home loan rates since they increased interest rates,” Michelet said.

“Pools are definitely a luxury purchase, for some people it doesn’t matter, but for others it can be quite tight.”

“Last year was pretty intense, it was the most intense. We were refusing work all the time,” he said.

“We still have the boom, but I can definitely feel it’s calming down now, with interest rates people are a bit more cautious.”