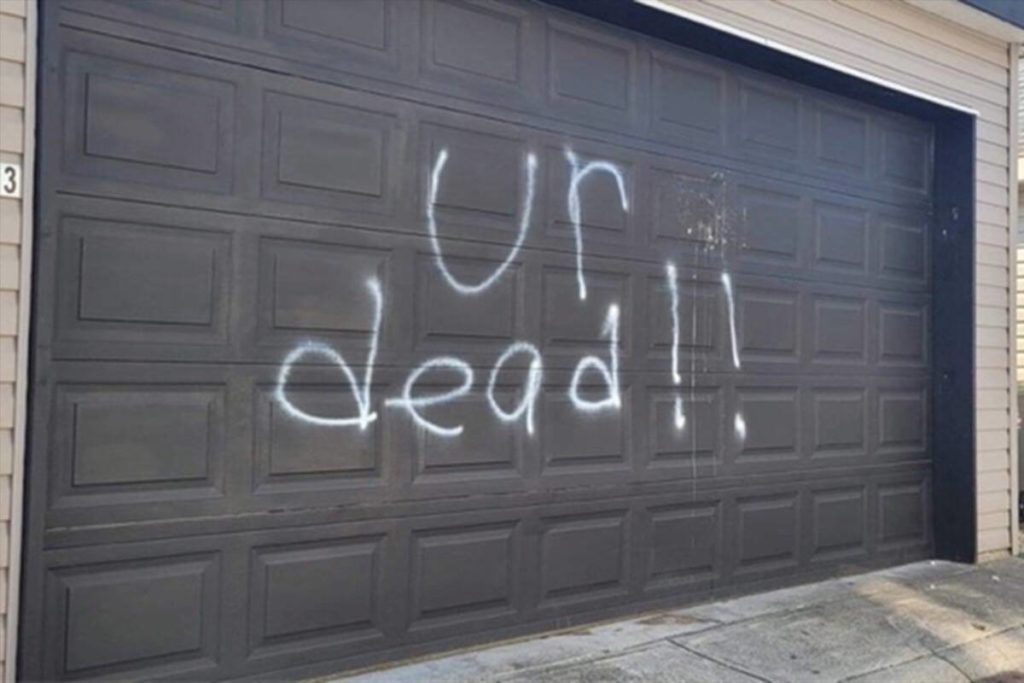 Surrey Mounties are investigating a death threat that was spray-painted on the garage door of a residence in Clayton Heights over the weekend.

Ivan Scott, founder of Keep the RCMP in Surrey, says the resident is a “supporter” of KTRIS but he wouldn’t reveal who.

“I’m not going to say who that is, we’ve got really not too much to say right now regarding that. The police are looking into it,” Scott told the Now-Leader on Monday.

Asked if he thinks it’s connected to the civic election, Scott replied, “It seems more than just coincidence that this would happen.

“I would assume that it is connected with the election, yes.”

KTRIS has been a vocal opponent of the city’s transition to the Surrey Police Service from the RCMP and has also endorsed mayoral candidate Brenda Locke and her Surrey Connect slate heading into the election.

“I’m not able to confirm anything about the potential victim of the threat,” she said.

Meantime, on Sunday night KTRIS sent an email alerting media to the threat. “At this stage it is not clear who the perpetrators are, but KTRIS believes that due to the fact that KTRIS recently endorsed the Surrey Connect slate of Brenda Locke for the upcoming municipal election, that this was definitely targeted against us by one of the competing slate’s supporters. KTRIS will be monitoring the situation very closely and will not be intimidated at all into reviewing our stance regarding the RCMP and our endorsement of Surrey Connect,” the email reads, from Ivan Scott and the KTRIS team.

“How low can Canadians sink to? Evidently this low. I am bitterly disappointed – it is illegal, unethical, immoral, dishonest and threatening. Is this a hate crime? Is this a connived strategy? Etc.?” the email reads.

The Right Way To Clean Your HVAC System On Your Own, According To An Expert – Exclusive