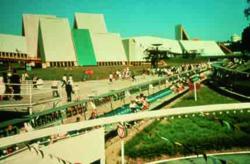 An architect at EXPO 64 in Lausanne, Switzerland, realized that he could use the new tear-resistant material Sika Sarnafil as the roof for the large tent-like pavilions at the Expo.

In 1962, chemists from the four-year Sarna Company introduced the Sarnafil membrane on a series of test rooftops. Shortly afterwards, an architect at EXPO 64 in Lausanne realized that he could use the new tear-resistant material as a roof for the large, tent-like pavilions at the Expo. At this exhibition, the young company became known to construction professionals all over the world.

Since then, the company has made more than 15 billion square feet of thermoplastic membranes – enough to cover both New York City and Chicago.

“Sarnafil membranes have consistently set the bar for high quality in the roofing industry,” said Brian J. Whelan, Sika Sarnafil senior vice president. “Renowned international organizations such as the British Board of Agrément and the Army Corps of Engineers, as well as independent research by roofing experts, have consistently ranked Sarnafil membranes among the best in the industry. Equally important is that the Sarnafil membrane continues to perform well, reassuring builders and builders that they are choosing a membrane with 50 years of proven performance around the world. “

In 1975, Sarnafil, Inc. was founded in Canton, MA and Mississauga, Ontario. The first US installation of a Sarnafil roof system in the US was completed the following year at the First United Methodist Church in Laconia, NH.

Sarnafil is known for its proven performance over time and known for innovating in the industry:

“Sarnafil’s biggest selling point is their track record,” said Justin Harris, owner representative for the Alpine School District in Lindon, Utah. “We walked on several Sarnafil rooftops over 25 years old in the Utah area – and it was amazing to see the condition firsthand. If necessary, you can still weld the old membrane on. The durability has proven itself in practice, not just in the test laboratory. “

Sika AG, headquartered in Baar, Switzerland, is a global company that supplies the market for specialty chemicals. It is a leader in the processing of materials that are used to seal, bond, dampen, reinforce and protect load-bearing structures in construction (building and infrastructure construction) and in industry (vehicle, component and equipment construction). Sika’s product lines include high-quality concrete admixtures, specialty mortars, sealants and adhesives, damping and reinforcement materials, structural reinforcement systems, industrial floors, and roofing and waterproofing membranes. Sika AG has branches in more than 76 countries worldwide, including Canton, MA, and around 15,250 employees connect customers directly with Sika and guarantee the success of all business relationships. With this business structure, Sika generates annual sales of CHF 4.556 billion. Further information on Sika Sarnafil in the USA can be found at http://usa.sarnafil.sika.com/.