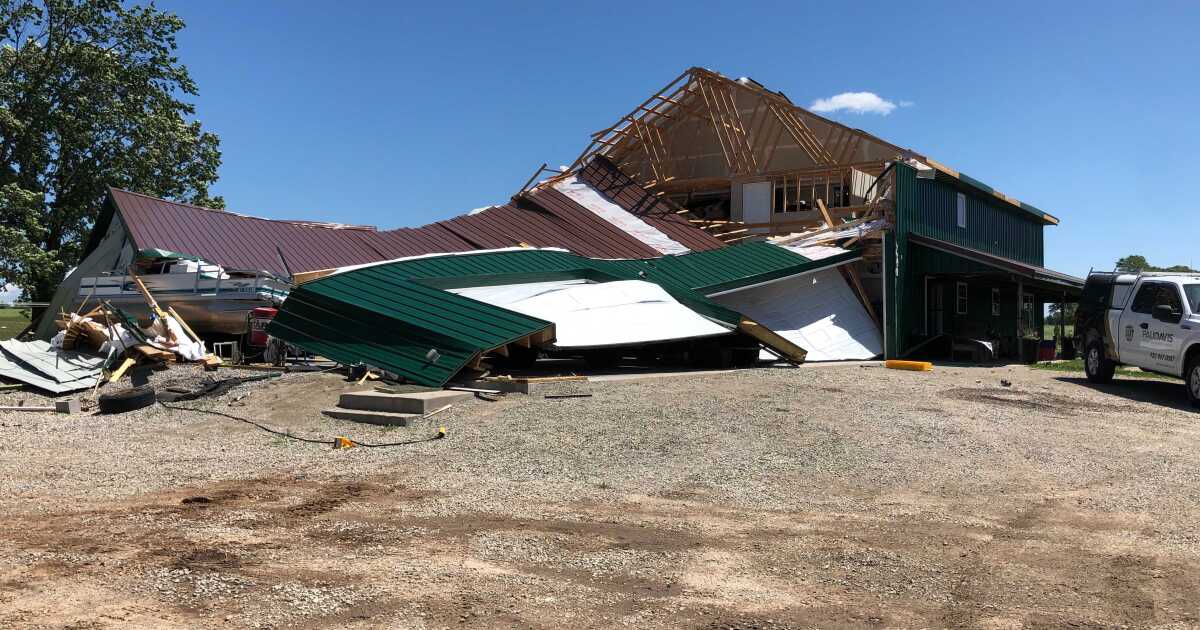 SEYMOUR, Wis. (NBC 26) — Seymour was just one of many communities that got hit hard from Wednesday night’s violent storms.

The garage collapsed on a house along Kropp Road, but that wasn’t the biggest concern for the family.

“One of the scariest moments of my life,” homeowner Laura Meulemans said.

Meulemans and her family have a safe spot when severe weather strikes.

It’s her in-laws house right down the driveway.

Meulemans says the plan was to seek shelter there when the sirens rang throughout town.

They were ready to leave, until suddenly, they couldn’t.

“It went in seconds,” Meulemans said. “Seconds! And my kids were in the car when the garage collapsed…you heard crash. I screamed, ‘my kids!'”

Meulemans says she and her husband took off running towards their children, and had to brace the garage door to get them inside the house.

They made it to their bathroom — safely.

“The Lord was with my children, and so was my dad,” Meulemans said.

Meulemans’ house was damaged so much that the National Weather Service surveyed the damage to see if a tornado powered through.

“We knew it was going to be a hectic day, and unfortunately, that panned out,” NWS meteorologist Kurt Kotenberg said.

Kotenberg and his team are exploring storm damage in areas all over Northeast Wisconsin.

Trees, houses, and other buildings ruined.

“It was almost like a hybrid-type event where we had little, embedded possible tornadoes, and then straight-line winds coming off of that,” Kotenberg said.

“Very consistent with at least 70-80 miles per hour,” Kotenberg said.

And while Meulemans may not have a home right now, she still has her family.

“My house is replaceable,” Meulemans said.

Meulemans says the family does plan to rebuild the home, but does not know how long it will take.

The NWS later confirmed an EF1 tornado touched down in Seymour just after 6:15 pm Wednesday. Kotenberg tells NBC 26 wind speeds reached up to 95 miles per hour. No deaths or injuries are being reported.