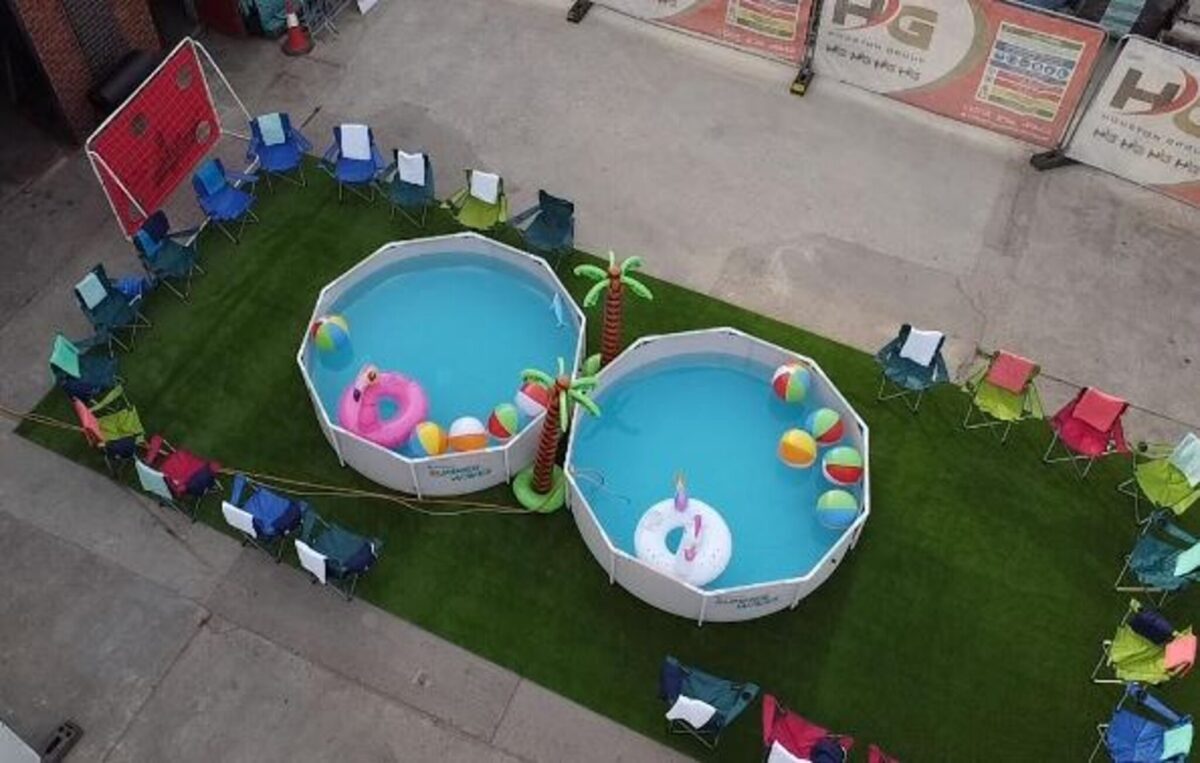 A ROOFING company boss has been hailed a legend after surprising his entire workforce with a pool party and BBQ during the heatwave.

Stuart Houston gave all his staff a paid day off on Monday and put on a party in the car park of the HG Roofing Supplies building in Leeds, West Yorkshire.

Staff turned up to find the managing director had laid out two pools, fold-up chairs, games, beers, a meat-filled BBQ and music for them all to enjoy.

Roofer Dylan Foster captured a video as he pulled into the yard expecting to be turning up to work on the 33°c day.

Video shows two pools filled with a variety of inflatable toys including flamingos and palm trees.

Burgers and sausages are shown sizzling away on a barbeque as the team enjoyed their extra day off.

Two roofers were captured playing badminton with their tops off as music played in the background.

The clip ends as 22-year-old Dylan is shown enjoying his time in the pool while laying on a floating hoop.

Dylan posted the video on TikTok on Monday where it has received over 1.8m views and more than 206,000 likes.

One said: “Top boss, it makes no sense to have people work in this heat.”

Another wrote: “Nah, your boss is a legend.”

A third added: “I’d say boss of the month goes to your boss.”

Another commented: “Your boss understands the assignment. What a legend. I would work twice as hard for a boss like that.”

While another person said: “That’s a belting boss. Keep your staff happy and they stay loyal.”

Speaking today, Dylan said: “When I turned up to work I thought it was a photoshoot at first from the outside.

“As I walked in it was like something out of Love Island with the swimming pools, barbeque and music with inflatable palm trees.”

Stuart Houston, managing director of HG Roofing Supplies, said: “We made the decision at the end of last week when we knew it was going to be hot.

“We just thought we would treat the lads with a pool party and barbeque, give them a paid day off due to the inclement weather.

“We always try to treat the lads once or twice a year when we can.”