Renovating a Mid-Century Modern Home: 9 Tips from an Expert 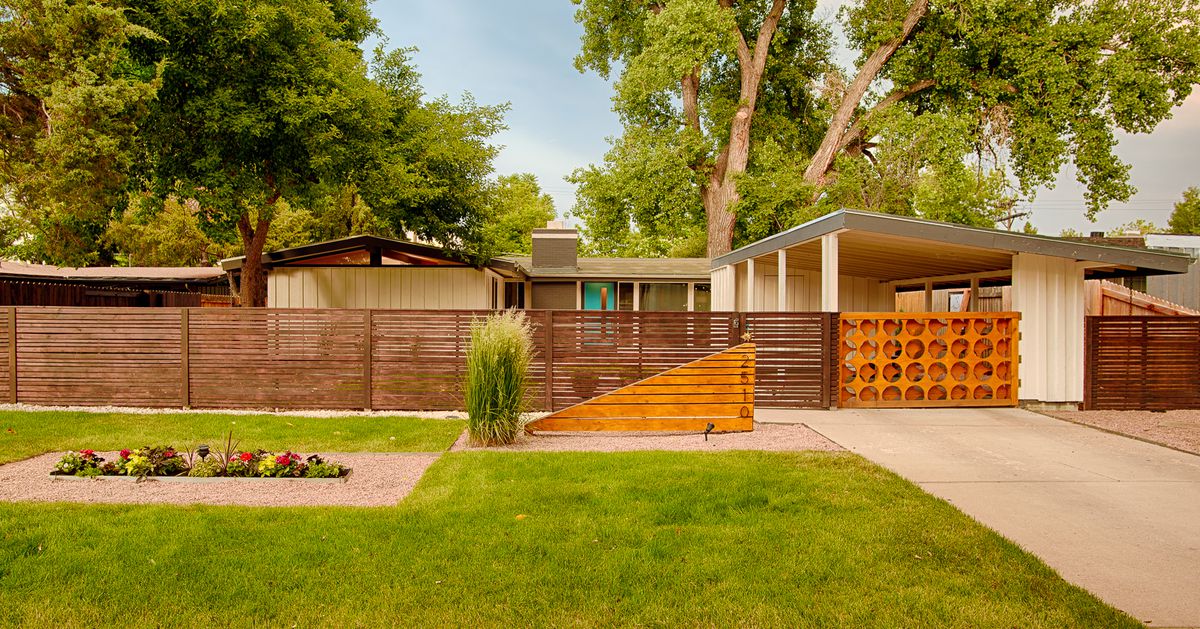 Everyone loves a perfect mid-century modern home. But even for those lucky enough to own one, the reality is that the house will likely need some work.

Many houses from the 50s and 60s were renovated uninspired and downright unfortunate in the 80s or 90s. And while a pristine time capsule is easy to find online, it presents the great challenge of balancing modern conveniences with mid-century authenticity.

To find out the best way to renovate a modern mid-century home, we reached out to Denver-based real estate agent and investor Adrian Kinney, who specializes in mid-century real estate. Kinney has also undergone several mid-century renovations, including an award-winning restoration of a Cliff May prefab home and its most recent project, a 1956 post-and-beam remodel that formed the cover of Modern in Denver.

How does Kinney do it? Here are some of his top tips.

Kinney’s most recent project is the Eichler-inspired one from 1956 in Lynwood – a popular mid-century neighborhood in Denver. When he bought it in 2016, the house was a mix of poorly thought out updates begging for a refresh.

One of the most common dangers of mid-century home renovations is “falling into the” trend “of the mid-century style rather than the true aesthetic,” says Kinney. Start any renovation project with front-end research. Look for what houses looked like back then, paying attention to the common materials, colors, shapes, and textures.

Kinney believes this is the difference between a home inspired by mid-century design and a home that is entirely mid-century. The good news? “Researching is a lot easier these days with the power of the internet,” he says.

Start with the basics

While not as flashy as terrazzo or as fun as a cool pendant light, renovating your home’s systems is essential. Things like roofing, electrical, HVAC, plumbing, and sewer pipes may be more than 55 years old and they can be very expensive to repair.

Pay attention to the details

When Kinney bought his newest project, the 1,600-square-foot home in Lynwood, a complete makeover was in order. But instead of opting for the latest and greatest, Kinney wanted to restore the house with respect for its roots. He says, “Let’s just say all mid-century things can fit into modernity, but not all modern things can fit into mid-century.”

If you want a timeless and authentic renovation, Kinney says materials and details are first and foremost important.

Opt for bricks, metals such as brass and chrome and real wood elements, not for the “shiplap vomit” that is so ubiquitous today. Kinney loves walnut for any type of wood paneling because it is “rich and elegant”. Note, however, that this will likely conflict with the original oak floors of most of the mid-century homes which have matured to a gorgeous honey yellow. You can color the original floors or change your color palette.

If you’ve got a bigger budget and a slab on flat floors, Kinney says, “Terrazzo is my everything”. In damp rooms, choose tiles, either a repeating geometric pattern or classic off-road vehicles in pink, teal, or yellow. Overall, “small details make it authentic.” 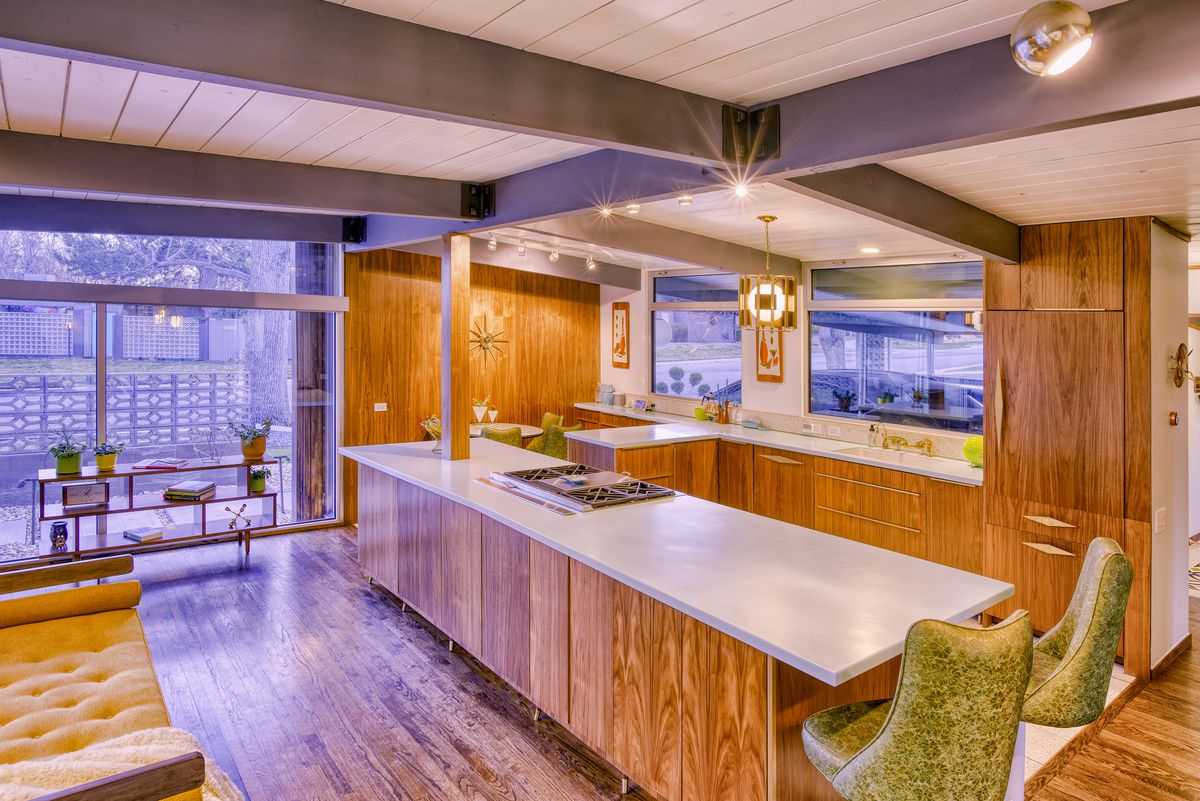 If you have a time capsule at home, keep it

If you’re lucky enough to have a home that wasn’t renovated in the 80s and 90s, “save as much detail as you can,” says Kinney. “So much of the future value of the home comes from here because so many buyers don’t want the McMansion buildings to be ‘ticklish’.” Instead, potential buyers want “character, charm, and yes, even some of the little quirks of the house – it has soul!”

In practice, it looks like the original cabinets (possibly with a refinish) will be kept and new hardware added inside and out. New appliances can work wonders in an old kitchen, and you can even get some with retro style from companies like Big Chill. and if you want to add flair, Kinney recommends using “geometric repeating pattern back-splash tiles”. 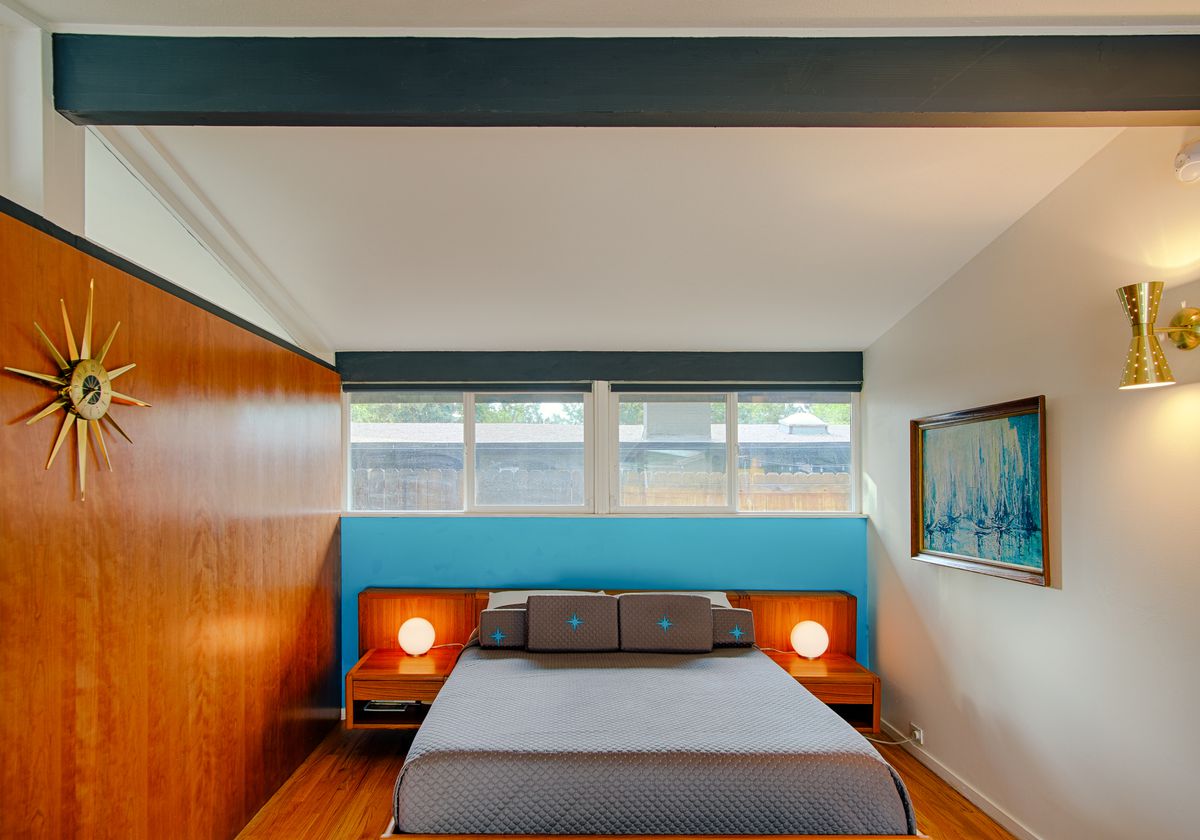 During his pre-fab restoration in Cliff May, Kinney went for wood paneling and went for simple, small details – like authentic light fixtures – to add character.

For a purist like Kinney, there are never “too many” real wood panel walls. He says, “I would never remove them if they were in great shape – but I know that not everyone is like me.”

If you love authenticity but aren’t sure about so much wood, Kinney recommends using colorful paintings, adding extra lighting, or even adding an extra window or two. “A combination of possibilities can make the old, dark room feel new and refreshed.”

Whether you have a time capsule at home or a mid-century one with good bones (and not much else), you are taking risks to recreate the style of the 1950s and 1960s. While working on his latest project in Denver, Kinney found authentic pieces from eBay, Craigslist, and real estate sales. When he couldn’t find what he wanted, he looked for artisans who could reproduce or recreate designs and often turned to Etsy for custom orders.

His advice: “Talk to a local designer – they probably know someone who does exactly what you’re looking for!” By emphasizing the original design, these special pieces fit into the room and are a talking point in any room. 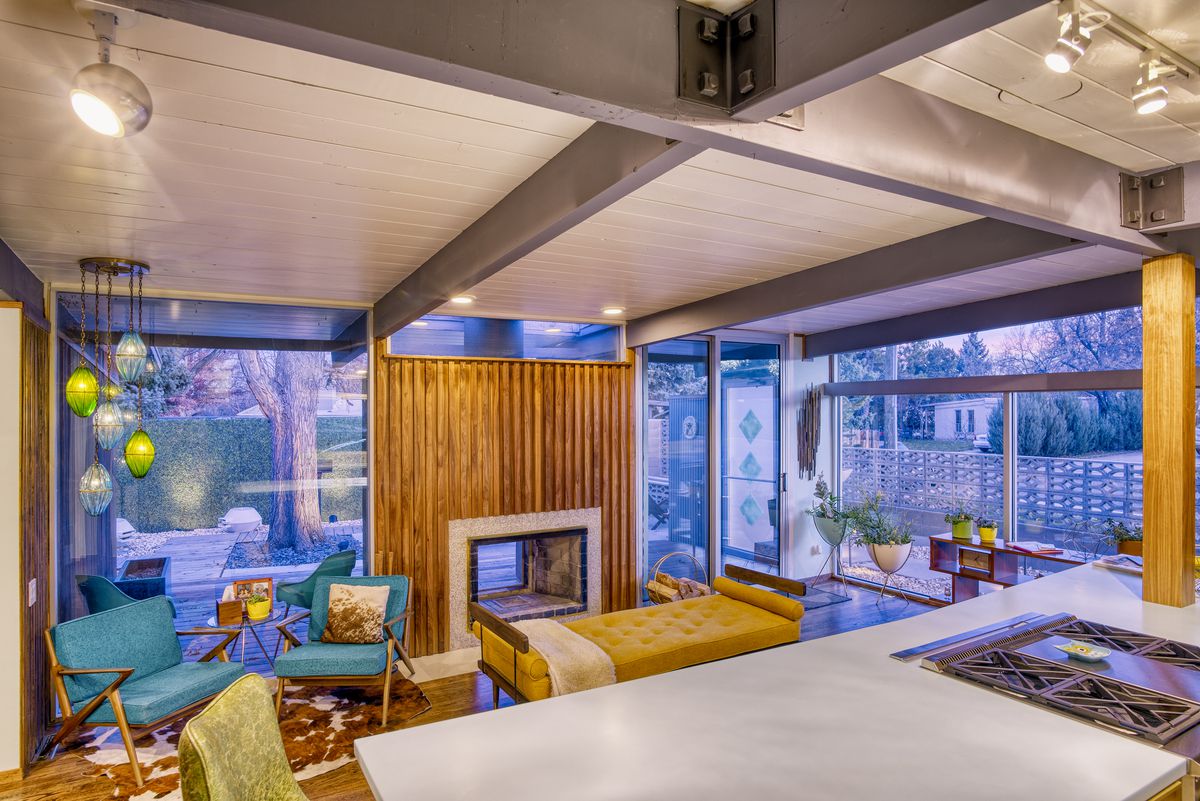 In Lynwood, Kinney used walnut and mahogany fixtures and paneling, brass and terrazzo floors, and an impressive two-sided fireplace. The three bedrooms and three bathrooms all have geometric shapes, contemporary lighting and sliding glass doors to the spacious back yard.

Update the windows if you can

It’s not cheap to update windows in a 1950s house, but if you have weather above 80 or below 50 degrees Fahrenheit, Kinney says, “Your heating and cooling bills will thank you for new double-glazed windows.”

To keep costs down, find a local window company that glazes in double-glazed windows. Kinney admits that these are less efficient than a real tabbed and bordered window, “but they are so much more efficient than the single window they replace.”

Another helpful piece of advice is to leave any giant, triangular, or secret window alone and only replace the windows around them. “This will help with the HVAC bills without putting a full charge on the bank account.” 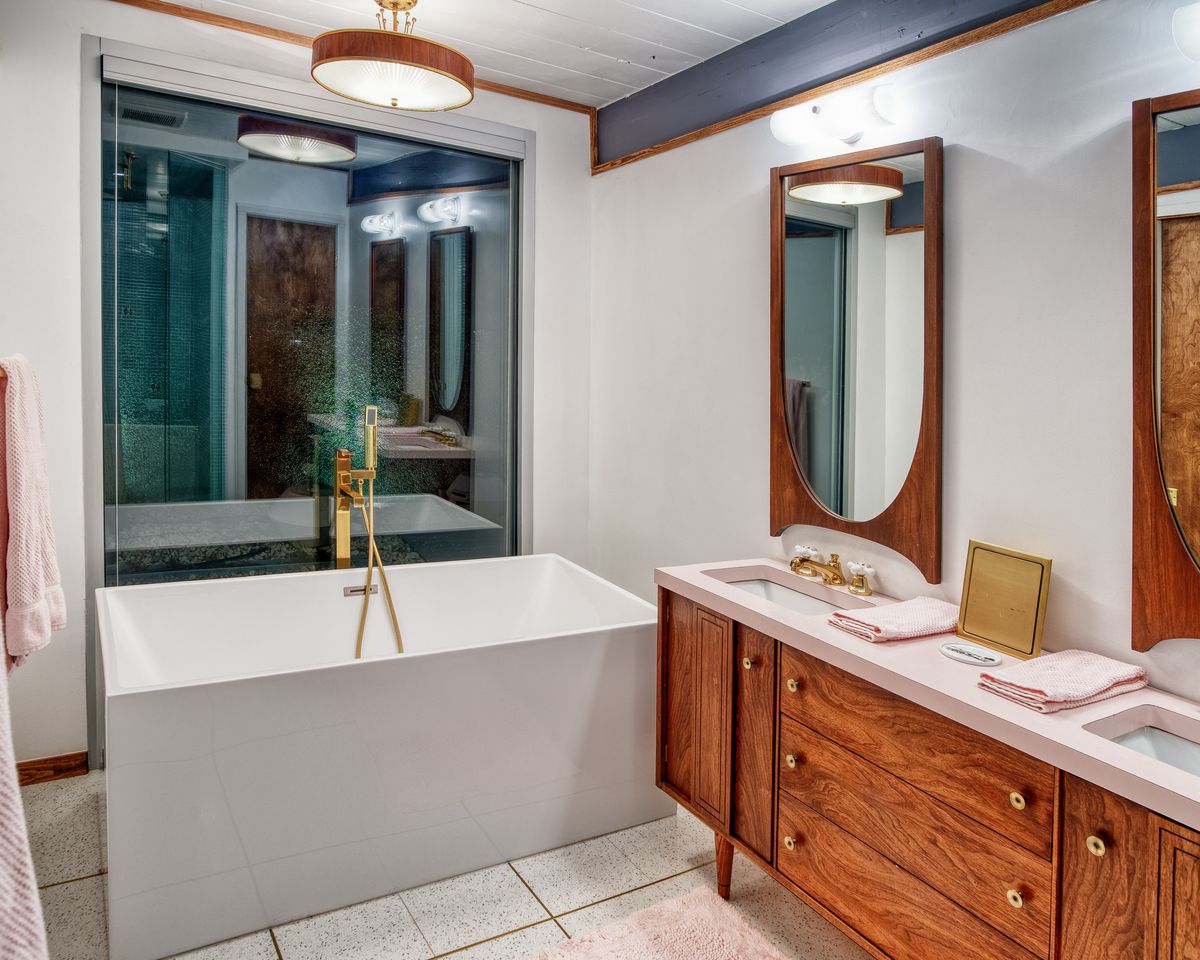 The master bathroom in the Lynwood house. Note the terrazzo floors, walnut and brass details, and a time-specific vanity with light pink counters.

Mid-century modern homes were built as the homes of the future, and Kinney believes that “today it is possible to let them live their futuristic” past “”. When renovating your home, add connected switches, plugs, lights, blinds, and curtains. “Everything is now available for ordinary people to buy, install, and hook up to their own system.”

Don’t forget your outside spaces

“Outdoor spaces in modern mid-century homes are an extension of the indoor space,” says Kinney. So don’t neglect them. Make them usable, livable and easily accessible from home. This could mean adding more doors to get into the rooms. Kinney added sliding glass doors to the back yard in many of his bedrooms in his Lynwood project.

Look for geometric, angular shapes and incorporate different materials such as stone slabs, slate, concrete slabs and wood. Outdoor spaces are more important than other types of architecture to mid-century design. Kinney explains, “The modernist house should have a smaller interior space and then blend in seamlessly with the outside.” 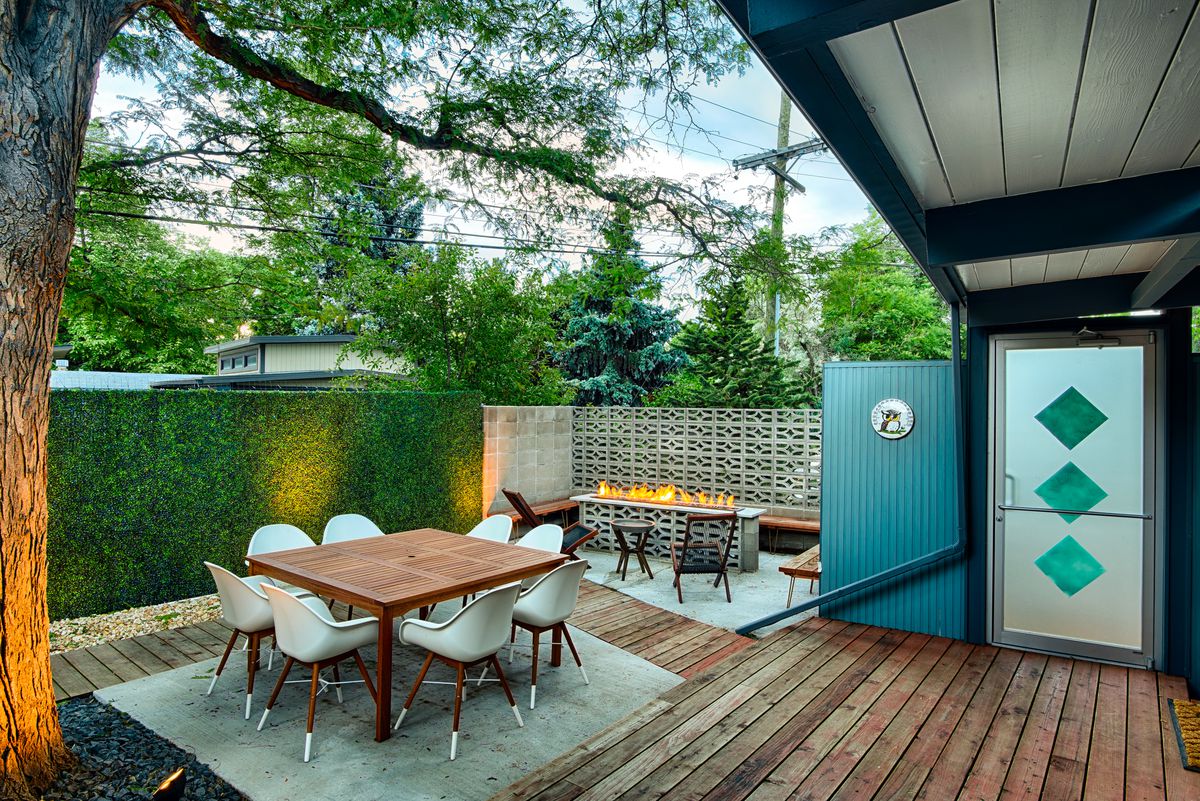 The outdoor areas of the Lynwood property have dining space and a fire pit.

Advanced Wildlife Control celebrates its 14th anniversary with growth in 2021