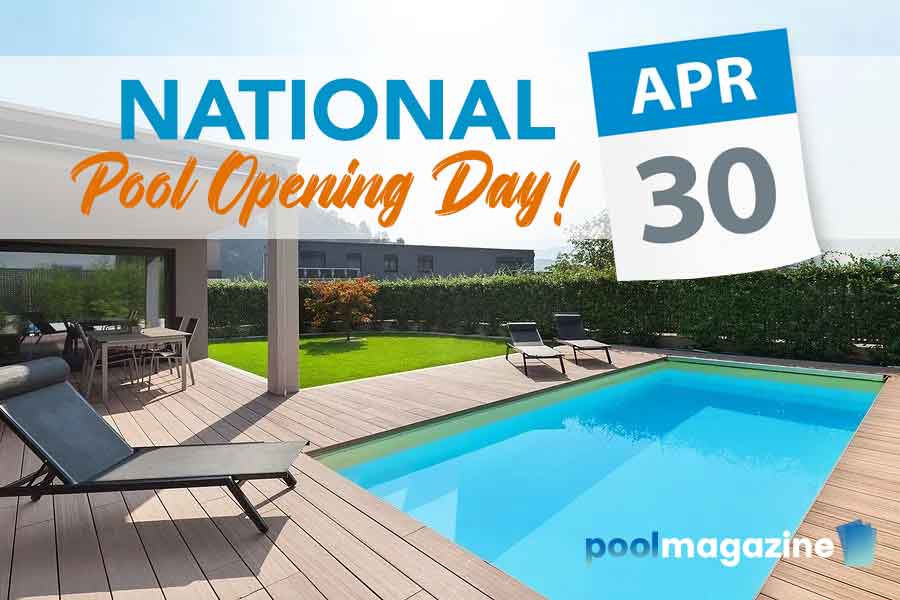 Form smart swim goggles are the first swimming goggles with a heads up display. This revolutionary new smart goggle is taking the swim world by storm. The product represents an incredible leap forward with advancements in the field of Augmented Reality (AR) technology which have finally made their way to the swimming pool. We recently had the chance to have an in-depth interview with the Founder and CEO of Form, Dan Eisenhardt, and discussed the product in great detail on the Pool Magazine Podcast.

Eisenhardt, who hails from a family of swimmers in Aalborg, Denmark – has always had a passion for swimming. In fact, he swam competitively himself for 14 years prior to starting his career as a sports technology entrepreneur. “I started swimming at a young age. My dad and his brothers were swimmers, my grandfather was a swimmer,” said Eisenhardt, “so that was always interesting to have those discussions around the dinner table.”

As he got older, swimming remained a passion with Eisenhardt. He swam competitively and won NJCAA All-American honors while swimming for Indian River State College in Florida. While pursuing a degree in mechanical engineering, he also developed an interest in entrepreneurship. He would ultimately decide to go for his MBA at the University of British Columbia.

It was this decision that would set the stage for coming up with the initial concept for what would eventually one day become Form. “There was an entrepreneurship class I was taking and the first thing we had to do was come up with an idea for a business,” said Eisenhardt, “since I was passionate about swimming and engineering, I came up with an idea for a swim goggle with a heads up display that could show you metrics in real time.” 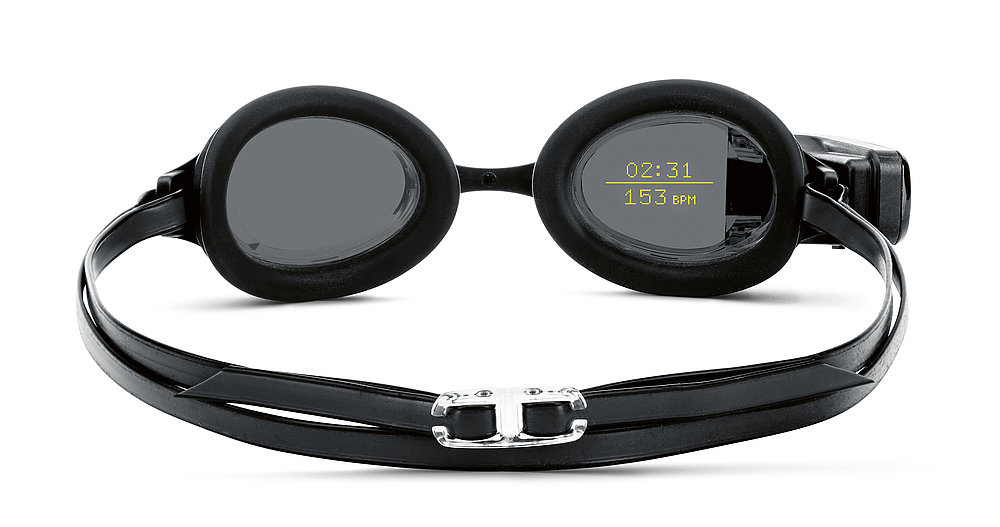 For Eisenhardt, it was the answer to a problem that had always plagued him as a competitive swimmer. “I always struggled with not having that as a swimmer, being in the pool, and not being able to see the clock. It seemed either my goggles were always fogging up there was someone standing in front of the clock and I’d have to do the mental math of when I left and when I came in.”

The timing for such an invention may not have been right for Eisenhardt back in his MBA days. “I pitched the idea back in 2006, this is before the iPhone was launched. A bunch of people came up and said ‘this sounds really cool but do you know how to build it?’”, said Eisenhardt, “I said ‘I have no idea if it really can be built but it would be cool if it existed ‘. So off we went and became a group.”

It was during these initial explorations into the feasibility of the product that Eisenhardt knew that he was ahead of his time with the concept, “I quickly realized it was too difficult to pull off as a swimming goggle at that stage the miniaturization, the environment, the sensor technology just wasn’t mature enough,” said Eisenhardt, “We ended up building a similar product into a pair of ski goggles so you could see how fast you were going, you could get text messages while you were skiing and resort maps in your goggles.”

“That became a company called Recon Instruments,” Eisenhardt explained, “we built 5 generations of that product before we sold it to Intel in 2015. We launched the first product in 2010. We were sort of the Intel inside of the action sports industry , we called ourselves and then we wound up selling to Intel which is kind of funny. Our biggest customers were the eyewear brands like Oakley, Smith, Uvex, and Scott and all those big brands. They adopted our technology as a modular solution that fit into their goggles. We sold to them and eventually developed our own cycling glasses with a heads-up solution. That’s where we started and got a lot of expertise and then Form benefitted greatly from that expertise.”

The success of that product launch and eventual sale would spur Eisenhardt to pursue his original concept of a smart swim goggle. “After that happened I went straight back to my initial idea because now the technology was mature and I had all this experience,” said Eisenhardt, “I launched my new company Form, and three years later we launched the first product which are the form swim goggles with the heads up display.” 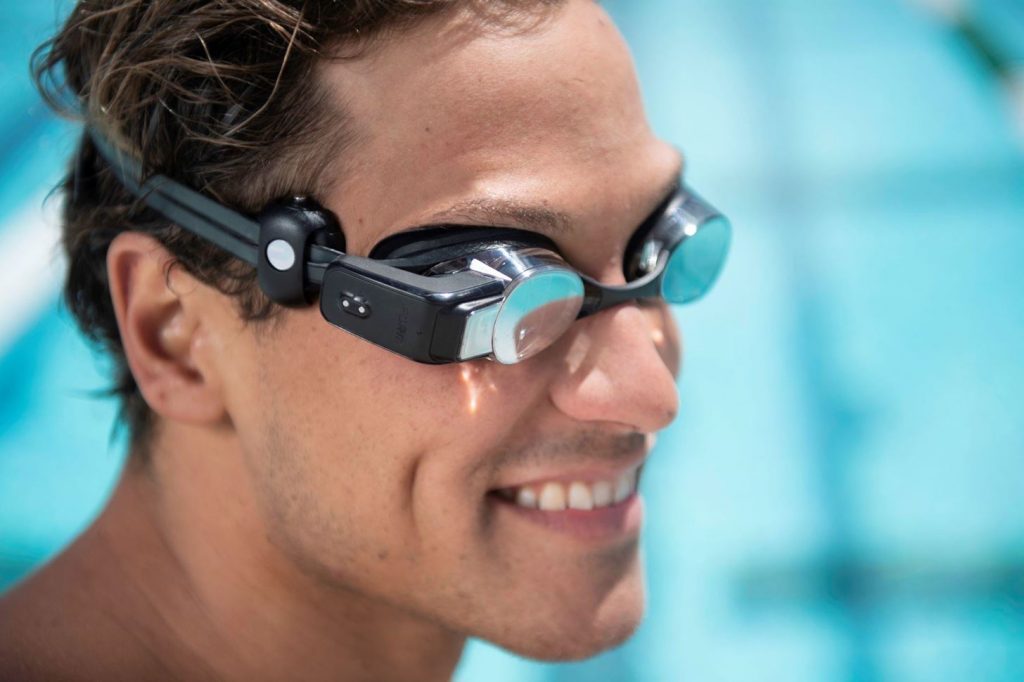 Eisenhardt would revisit the concept that had so intrigued him throughout college. The technology for FORM had arrived.

The decision to backtrack to these earlier years and revisit the swim goggle product is one that had come full circle for the innovator. Coming up with a superior product in the swim goggle space is an objective Eisenhardt considered his personal mission to achieve. A feeling of unfinished business and that the stars had finally aligned for this type of product would inevitably be what propelled the innovation that has become the Form goggles.

“I always thought the killer app for swimming was AR because there was no alternative. There is nothing in swimming that can give you the real time information without the tradeoffs. I really thought it was unfinished and I wanted to go back to that starting point.” 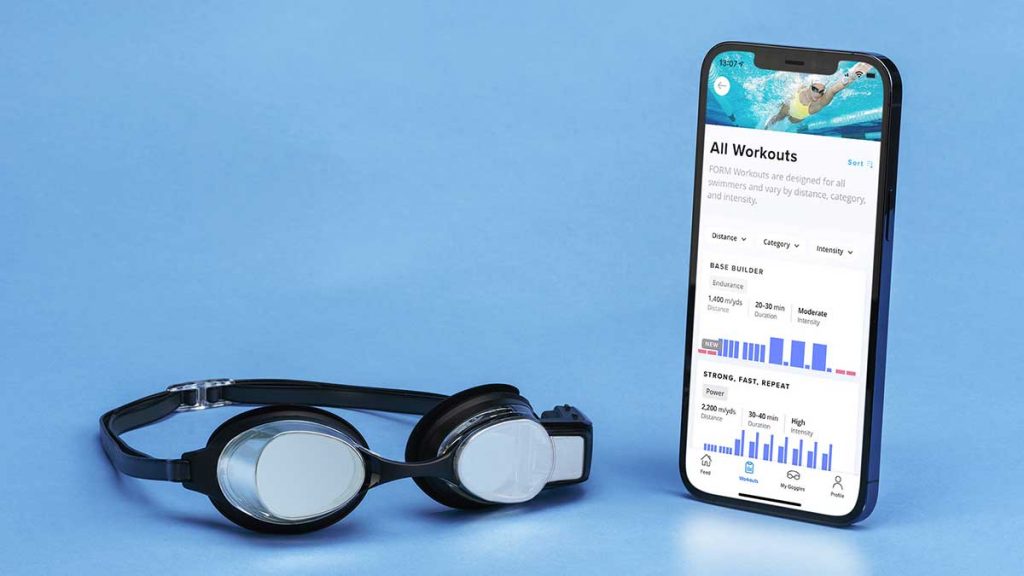 Form goggles allow you to keep track of your workouts on your smartphone. – Photo Credit: FORM

Building the ultimate app for swimmers would involve finding the right people to help execute in the application design. “When you talk about AR, it’s a completely new category. It’s very different from developing other types of products. The hardware is potentially not the biggest constraint, it’s more of the killer app that runs on the hardware, or the business model. Here we’re still early on in AR, it’s taken a long time because it’s a difficult problem to solve.”

Eisenhardt suggested the challenge of putting technology in front of people’s eyes had constraints beyond mere engineering hurdles. Other early AR devices like Google Glass had failed because of the social stigma of wearable tech. Beyond that, the overall look and feel of the technology created a usability matrix of problems for form to solve with their product.

It was through iteration prototyping that Eisenhardt would come up with the perfect balance for the Form swim goggles. Determining what was feasible was important, “we said what can we do from a hardware perspective, where can we position electronics, how much information can we actually show when you’re swimming and how can we dumb it down so that it doesn’t actually distract you.” In discussing the technology, Eisenhardt gave us an overview.

“The product works on a nine-axis sensor in the goggles, incorporating a (3-axis) accelerometer, (3-axis) gyroscope, and (3-axis) magnetometer into the wearable device,” explained Eisenhard.

All of these sophisticated sensors work in tandem with a machine learning technology form has spent years developing with swimmers of all types of backgrounds and skillsets. This enables the device to be able to determine what swimmers are doing in the pool automatically.

“The device knows if you’re resting or swimming. If you’re swimming it knows what stroke type and how fast you’re going,” said Eisenhardt, “those core metrics our machine learning takes care of. Then we’ve got all sorts of other features that will calculate your last length pace and your stroke rate, distance per stroke, and all sorts of other metrics.”

“The overhead display chain uses a freeform optics wave guide which guides the light from a micro OLED display. This hits a beam splitter which sends the image directly to your eye so you see a virtual image that is always in focus,” Eisenhardt explained.

Getting accurate information that would provide swimmers with meaningful data to improve their performance was vital in getting competitive swimmers to embrace the product. Providing them with a 1-to-1 ratio of what was going on in the pool and giving them real-time data has been what has made the Form product a smashing success with triathletes, competitive, and recreational swimmers.

Getting the device to spit back the real-time metrics that was important to swimmers was something Eisenhardt worked painstakingly to get right, “We spent some time on that and the metrics that are important is different depending on what type of swimmer you are,” Eisenhardt said, “typically you want to be able to see your pace per 100, how fast you’re swimming, how far you’ve gone, a length counter or lap counter.”

The device also allows swimmers to see how they perform over time. “You want to be able to see your split times so you can compare current length over the last length, your heart rate, and so forth,” Eisenhardt explained. 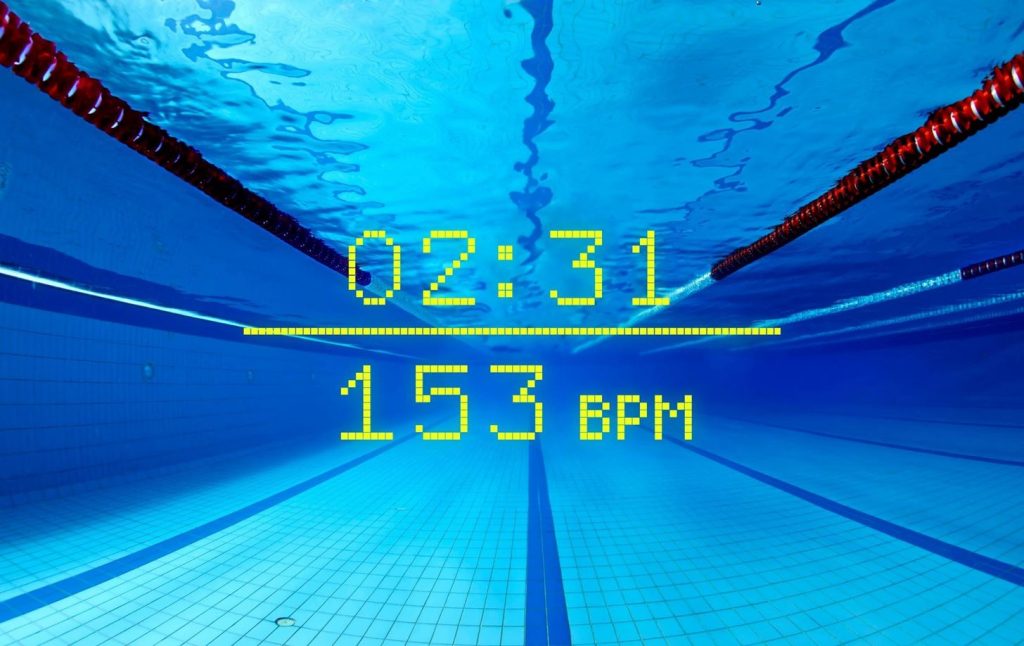 Form swim goggles allow for custom configurations based on the data you want to see in real-time with three different contexts including Swimming, Stroking, and Turning. These aspects allow different data sets of information to appear on the heads-up display as they occur. All of this incredible data allows swimmers to have better visibility of their stats in the pool. The device is being touted as the swim coach’s assistant, given that the 10,000-foot data the goggles provide gives trainers better insight into swimmer performance.

Listen to our entire interview with Dan Eisenhardt and learn more about Form smart swim goggles on the Pool Magazine podcast.

Our Complete Guide to Drywall Repair