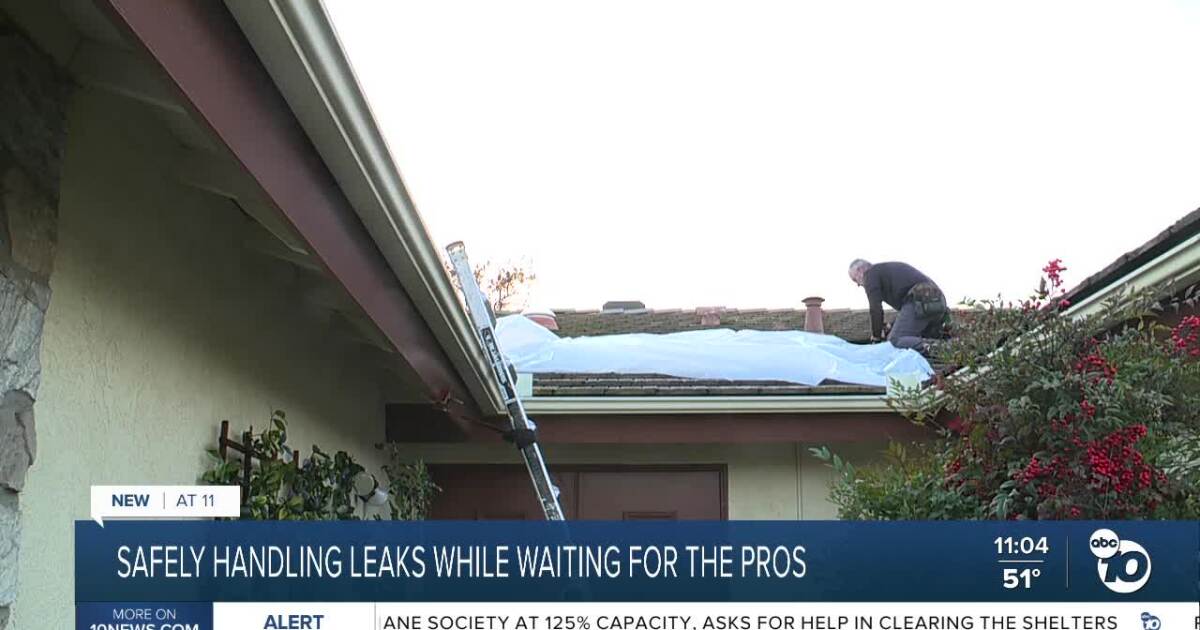 SAN DIEGO (KGTV) – Dana Logsdon moves like a cat on a roof. Gracefully gliding across these tiles to put up a trap over a leaky roof before the storm rolls into San Diego.

“So, water intrusion in a house is extremely damaging not just to drywall, but it can also give you mold and mildew if you let it sit too long,” Logsdon, the owner of Dana Logsdon Roofing & Solar, said.

This contractor told ABC 10News that if you can’t get a roofer out to your home and the water is coming through, there are a few things you can do safely to make sure things don’t go from bad to worse.

“Maybe go in the attic and put a bucket or pan in the attic to mitigate the damage. But you need to slow down the water intrusion or stop it, if possible,” Logsdon said. “Sometimes poking a hole in the ceiling to allow the water more rapidly into a confided area is a good resolution temporarily.”

Logsdon said that’s no different than putting a small nail in the wall to hang a picture.

It’s better to have the water flow from the ceiling into a bucket than spreading into your dry wall.

Now, if you have no other option, the water’s pouring into your roof, and you must put a tarp on your roof – which Logsdon says is dangerous – make sure you have a plan or even ask a roofer what they would do.

“Make sure you’re tying off your ladder and that you have a plan on how to walk up the roof,” Logsdon said. “So experienced roofers always have a walking plan on the roof, expecting that we’re going to slip at one point or another. Is there going to be a stop-gap to keep us from going off of the roof and getting seriously injured. “

And this cat on the roof says it’s still not too late to call the pros if you’re having an issue with the looming storm.

“Call the contractor when it’s raining. Just be patient. Understand that contractors are overwhelmed right now. Put your name on that list and get them out there as quick as you can,” Logsdon said.