Solar installations in the south Indian state of Kerala are proliferating since a major block in the form of a transformer capacity cap was significantly raised two years ago, according to an independent clean energy consultant based in the region.

G. Sivaramakrishnan, who is also a member of the Kerala government’s state planning board’s Energy Working Group, told PV Tech Premium that although Kerala will fall short of its original target of 1,870MW by December 2022, having just 700MW installed at present, the PV sector is gaining rapid momentum. The government of Kerala now has a new target of 3GW by 2027.

While the COVID-19 pandemic and the reluctance of distribution companies (discoms) to lose high-paying customers slowed progress in the state, the support for solar in the rest of India is rubbing off. There have also been several supportive policy changes at both national and state level this year.

Prior to 2022, the key change in Kerala was the lifting of a cap on the amount of solar that can be added to any single transformer. The cumulative capacity of distributed energy systems allowed to be interconnected with the distribution network was raised to 75% of the distribution transformer capacity.

The Kerala State Electricity Regulatory Commission (KSERC) shifted the cap from 15% to 75% in 2020, freeing up space for solar deployment. PV Tech reported this issue back in 2017 when a high concentration of consumers wishing to install solar on their roofs in the city of Trivandrum were blocked due to the 15% cap already being reached.

“That’s a major relaxation and because of that, a lot of projects are happening in Kerala,” says Sivaramakrishnan. “It opens a good opportunity for those investors interested in having rooftop solar systems.”

Kerala is a densely populated state with very little land to spare for large-scale solar, but the rooftop and floating solar segments are thriving. To encourage more residents to install PV, subsidies for rooftop solar have been extended to March 2026 by the central government.

“There will be no hindrance,” said Sivaramakrishnan, because the government of India has identified nearly INR180 billion (US$2.2 billion) which needs to be spent in this area.

The central government has also decided to implement virtual net metering for the residential sector, which allows communities to share a number of PV units and create a common plan to reduce their energy bills cooperatively. The policy also allows independent third-party-owned PV plants to sell the electricity to stakeholders. The policy is slowly being extended towards the commercial and industrial (C&I) sector too.

“The ultimate aim is that the entire consumer society will get benefited from this policy of virtual net metering and gross net metering,” added Sivaramakrishnan.

By following a guideline from the Central Power Ministry, many discoms in other parts of the country restricted net metering only up to 500kW. However, the Kerala State Electricity Regulator retained the upper ceiling of 1MW for net metering, following wide protests from the Kerala Renewable Energy Entrepreneurs and Promoters Association (KREEPA) and other trade bodies. 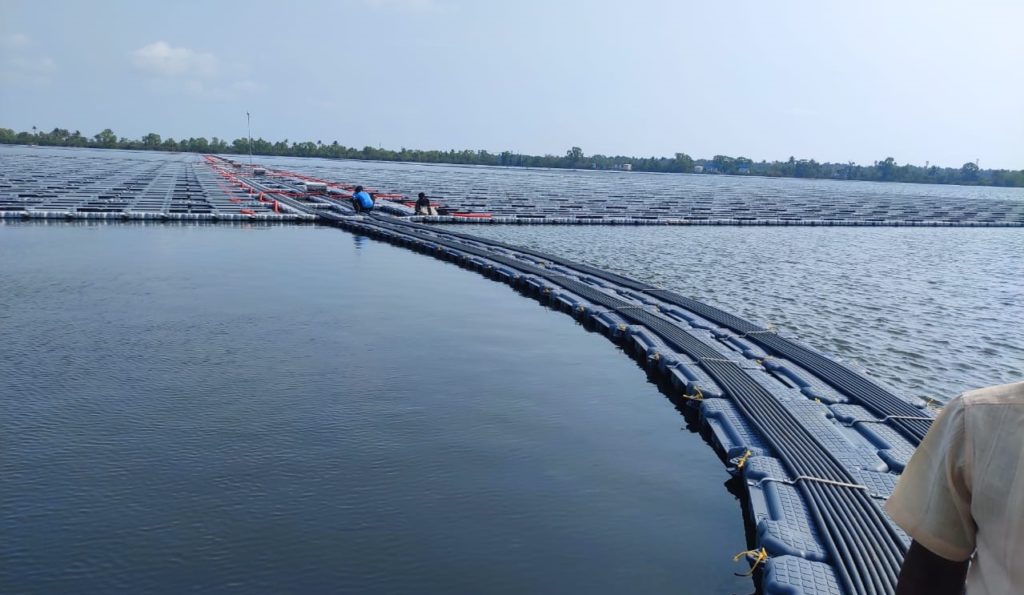 Innovating away from ground-mount solar PV, the Kerala State Electricity Board has decided to focus more on floating solar power plants by releasing tenders for large floating plants on three of its reservoirs.

In the summer, India’s state utility National Thermal Power Corporation (NTPC) commissioned a 92MW floating solar plant at Kayamkulam in Kerala, its second largest floating project behind the 100MW Ramagundam project in the state of Telangana.

Kerala’s government, in association with overseas agencies, is also planning a green hydrogen manufacturing facility near Trivandrum for the marine sector. The facility’s renewable energy requirements will be met through a floating solar plant which is proposed exclusively for the Kannur district of northern Kerala with power to be wheeled towards the south.

Kochi Refineries, a major petroleum refinery in Kochi has also announced a tender for a 7MW floating PV system within the refinery campus.

Overall, Kerala has 250MW of floating solar in the pipeline with hygroscopic surveys underway already.

Despite the large-scale PV constraints, there are a few smaller projects happening in marshlands of between 5-10MW capacity. Furthermore, this year the government has identified another 240 hectares of land for the expansion phase of the Kasaragod Solar Park, which already has 100MW commissioned. Additional capacities under the Phase I scheme are being tendered by SECI, the implementing agency of solar parks in India.

India has had green energy corridors for evacuating power generated from solar plants for some time, but these corridors are now being extended to Kerala.

Furthermore, under new green energy open access rules this year, any consumer with a connected load of greater than or equal to 100kVa can request their utility to provide green energy as the primary source of power and the discoms are obliged to provide this service.

Sivaramakrishnan also praised the central government-led ‘Must-Run’ status of solar plants that mandates discoms to absorb the energy produced from PV plants into the grid without any hindrance. Any default is a violation of law and the discom or purchaser is liable to pay deemed energy generation charges as compensation. As a result, investors can now have more confidence in deploying solar.

One of the drivers of the open access rules has been Kerala’s target of 100,000EVs by 2025 because it allows EVs to be powered by clean energy, added Sivaramakrishnan. The state has made progress by setting up some renewable energy-powered EV charging infrastructure.

Trivandrum has also been selected as a state Solar City with a requirement to install 100MW of solar power. The process is already underway with the ANERT agency being identified to implement it. Sivaramakrishnan claims that once completed, it will be the largest Solar City of its kind in India and, in effect, Trivandrum will have become net zero. The projects will also include charging stations for electric vehicles and solar-powered smart bus shelters.

Furthermore, in a bid to become a net zero company, the Kochi Metro Rail has installed a 10.5MW solar plant with another 12MW solar park on its way.

In conclusion, Sivaramakrishnan, who was speaking midway through the KREEPA Green Power Expo 2022 in Kochi, said that the energy transition is starting to pick up speed in Kerala. Domestic power and lighting consumption is also seeing a “sea change” in adopting electricity as the primary source of energy with most of that coming from solar and other renewables, while electric mobility is also proliferating rapidly. In terms of installing large capacities, floating solar holds the key for the near future.

Insights on the Ride-On Mower Global Market to 2027