“It was the only option”: deer caught on the fence were euthanized 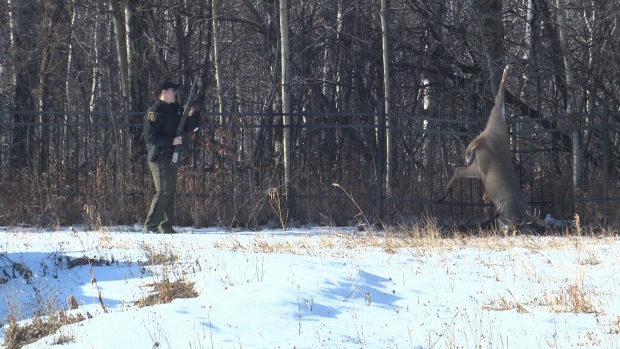 A deer caught on a fence in Cameron Heights Wednesday afternoon was shot dead by a fish and wildlife officer.

Witnesses and Fish and Wildlife said the deer tried to jump over the fence and was caught in the groin.

Fish and Wildlife decided to shoot the animal while families and children watched.

“This deer was impaled pretty deep in its groin and the damage was pretty great,” Dennis Prodan, a fish and wildlife officer, told CTV News. “It also fought a bit in the fence, so it increased the damage. To do the human thing and alleviate its suffering, the animal was knocked down and it was the only option. “

A deer was caught in the same fence on November 3rd, and this wasn’t the first time it has happened.

“The neighborhood was very interested in changing these fences. They’re pretty dangerous, they have those sharp spearheads on top of them and the animals seem to get caught on them a lot, ”said Pardeep Dhillon, who lives in Cameron Heights. “I think the city needs to change something and not allow these types of fences when wildlife is around.”

Ward 5 councilor Sarah Hamilton said the issue is being examined and hopes to resolve it within a week.

Prodan said the fence was “obviously an issue” and urged people to become more aware of the impact it has on wildlife.

“It’s not a good situation. It is really an unfortunate situation, ”said Prodan. “Unfortunately he didn’t jump high enough and got caught.”

With files by Matt Woodman