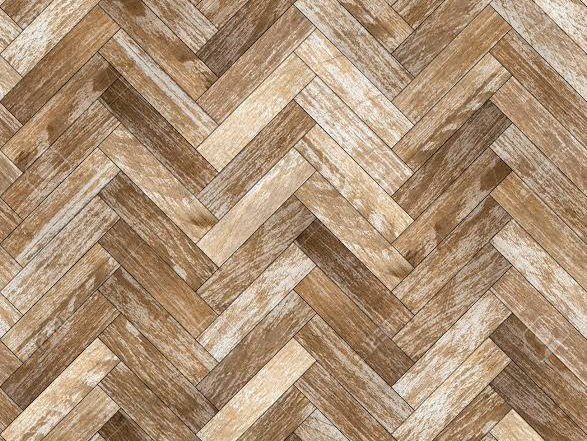 Did you know that the herringbone pattern is named after the herring fish because it resembles the fish’s bone structure? Or that the Romans first used the pattern on their streets before it became one of the most popular hardwood floor designs in the world?

Architects in ancient Rome found that streets could last longer if the bricks were laid in the same direction as the flow of traffic.

Herringbone wood floors are a type of parquet that by and large describes any hardwood floor laid in a pattern. For example, parquet floors also contain chevron patterns, as well as triangles, squares, and even curves.

Both herringbone and chevron patterns feature repeating V-shaped zigzag formations with uniformly sized rectangular planks that are arranged at 90 degrees to each other. However, a herringbone floor has staggered planks, with the straight edge of one plank aligned with the side of the next, while a chevron pattern is created by arranging planks cut at an angle and placed so that they line up in a straight line Meet line. A herringbone pattern adds a dynamic element to the floor, while chevron adds consistency.

The application of herringbone and chevron patterns to wooden floors began in the 16th century and became very popular among French nobility and throughout Western Europe. Parquet came to England in the 17th century and the trend continued into the 20th century when it was associated with architectural styles that epitomized luxury, opulence and size.

Hardwood floors gave way to cheaper carpeting around the 1930s, and many beautiful hardwood floors remained hidden under textile flooring for almost half a century. Popular interest in parquet was resurrected in the 1980s by design trends aimed at vintage and retro looks to find inspiration for upscale projects. Since the resurgence, there has been a surge in popular interest in hardwood floors, especially as both herringbone and chevron patterns are preferred for heritage and contemporary design in residential and commercial buildings to add an element of timeless sophistication. Wood floors have also caught the designer’s attention as the natural look is on trend in modern interiors.

Although herringbone floors were originally preferred for large spaces, modern installations have managed to add depth to small areas. Various hardwoods can be used to create a herringbone floor, including red oak, white oak, maple, sapele, hickory, and walnut. The distinctive wood grain and color of each hardwood add a unique touch to the final design result. For example, white oak has a straight grain with light sapwood and light to dark heartwood. Hardwood floors can last for generations if properly cared for.

Designers often use two or more hardwoods to maximize the contrast of colors and wood grain in modern installations. Herringbone planks can also be customized with special borders to create a personalized version of the classic pattern. In areas exposed to water, such as B. bathrooms and kitchens, ceramic or stone tiles in wood look can be arranged in a herringbone pattern to achieve certain design goals.

Herringbone floors can be made with wide or narrow planks – wide planks are perfect for modern interiors, while narrow blocks go with urban, industrial or shabby chic designs. Alternating colors can create a rich look even in contemporary decor plans.

Engineered wood planks, made from engineered wood or hardwood veneer based on hardwood plywood, are available in a wide range of colors, surfaces, textures and sizes. This increases design flexibility and leaves room for unusual color combinations. Bamboo and reclaimed wood tiles are also an elegant choice of materials for herringbone floors.

Solid wood planks or blocks are not completed and must be stained, sanded and sealed prior to installation. By coloring, you can achieve the desired shade or make the grains more prominent. However, when it comes to hardwood, the trend is to keep it natural. Popular shades in the color palette of a herringbone floor are gray, black, brown and white tones that change in color depth from light to dark.

Modern herringbone floors are laid using tongue and groove technology. A professional plumber is highly recommended due to the craftsmanship and precise work involved in creating the classic pattern.

The cost of installing a herringbone floor depends on several factors, including the choice of material – hardwood or engineered wood, hardwood type, floor thickness, and surface finish. For example, this solid French oak herringbone parquet costs $ 99 per square meter and comes unfinished. Boral’s parquet, which is available in block style, starts at $ 51 per square meter. Solid parquet is expensive, costing between $ 150 and $ 250. The installation will cost anywhere from $ 30 to $ 50 per square meter, depending on the complexity, while sanding and polishing (for solid wood) will cost an additional $ 30 to $ 35 per square meter.

A pre-installation inspection checks and confirms whether the existing sub-floor is suitable for the new flooring. The flooring can be installed on a number of structurally sound, flat and dry substrates such as plywood, chipboard, wood, concrete or dry screed. The boards have a tongue and groove profile and are glued together with glue and nailed down with a floor nailer. Alternatively, you can use the floating floor method for wood-based panels.

A natural oil or varnish coating protects the surface from spills, stains and wear. Regular vacuuming, wiping and cleaning with an approved wood floor cleaner will keep the floor in top condition for years. In addition, the natural aging of solid wood floors contributes to greater authenticity.

The dynamic movement of a herringbone floor has an inviting effect on the entrances and hallways of houses. The application of the pattern depends on the dimensions of the room in the foyer. A herringbone floor in a narrow hallway creates the perception of a large room. Larger, rectangular entry rooms could contrast the herringbone pattern with straight boards or a stone floor for contrast and relief. 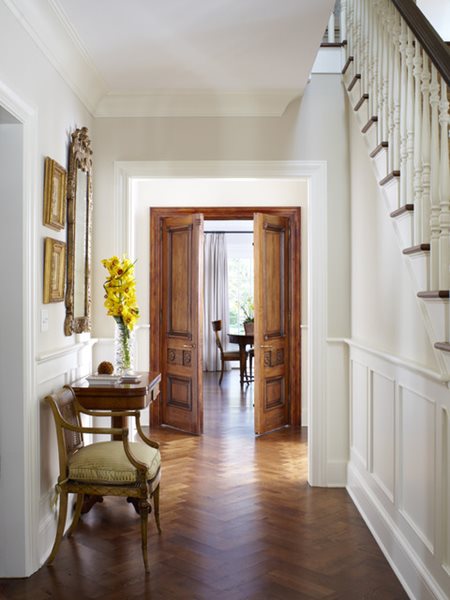 In this application below, the classic dark hardwood floor is balanced with straight planks with herringbone marble tiles that add a modern twist to a traditional floor design. 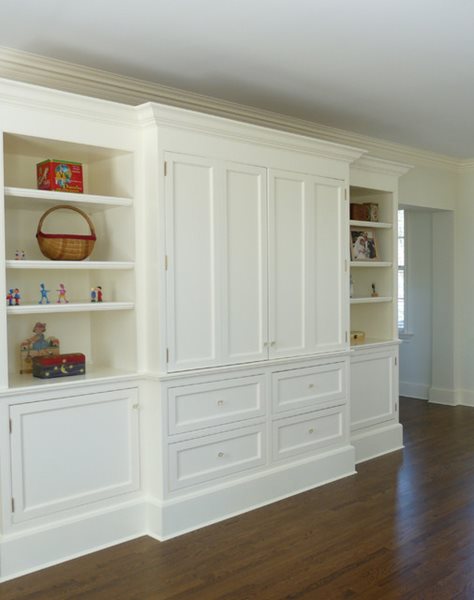 Traditional herringbone floors are made from individual planks. The double herringbone pattern pairs the planks and visually creates a stronger impression. Get more creative by mixing colors, grains, surfaces or styles for a stunning two-tone effect. A double or triple plank installation not only creates a larger herringbone pattern, but also looks more impressive. 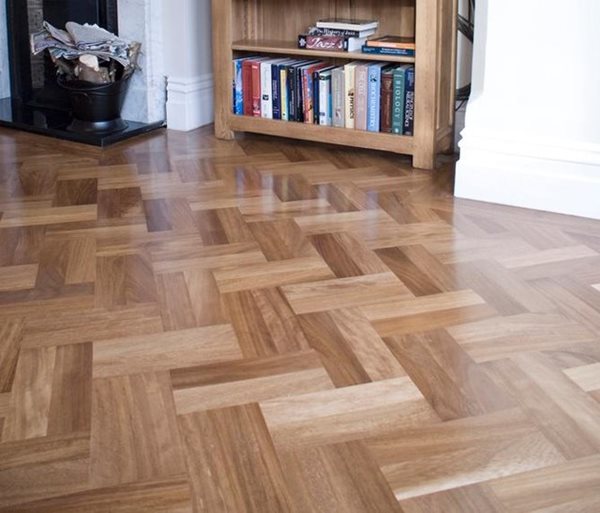 Herringbone floors are ideal as feature floors – buy them for select spaces in your home and break them up by laying straight planks in other areas.

Wood effect ceramic tiles laid in a herringbone pattern offer an aesthetic but practical alternative to traditional wood or wood flooring options in wet area applications. Bathrooms, kitchens, and laundry rooms are exposed to moisture, with wood-based options risking warping and mold. Tiles with a wood look made of ceramic or stone deliver the same timeless design result without any problems with moisture. 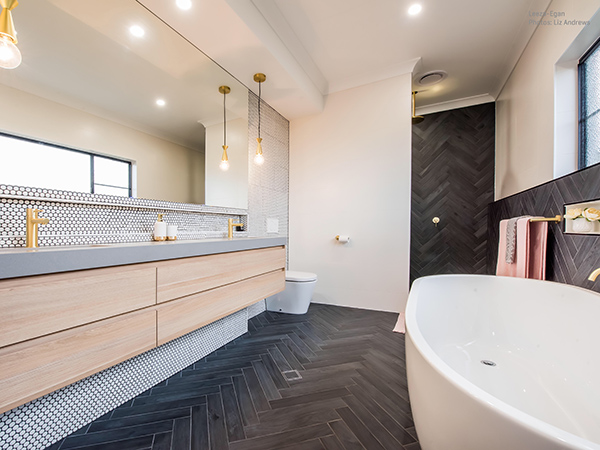 In this Beaumont Tiles bathroom design, herringbone wood-look tiles have been used on both the floor and the wall to offset the predominant use of white in the palette. Image: Beaumont Tiles. 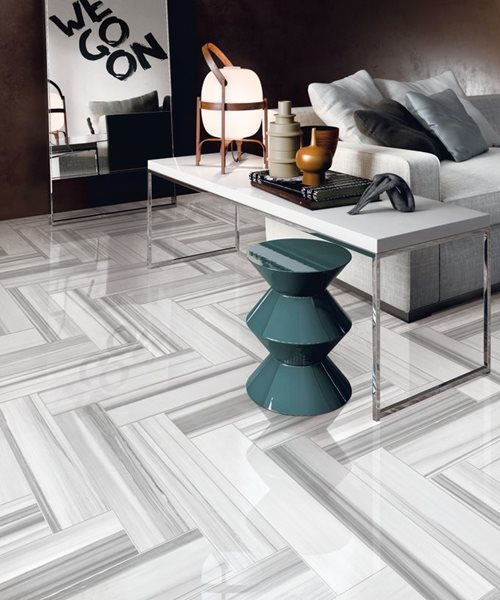 In an open layout with different elements, a herringbone floor acts as a connecting thread to achieve a cohesive appearance and to give definition to the large room. Herringbone floors also allow a seamless transition between adjacent rooms.

In the Facet House project, the oak parquet floor from the living room merges seamlessly with white porcelain tiles in the kitchen area, with the herringbone pattern connecting the two rooms. 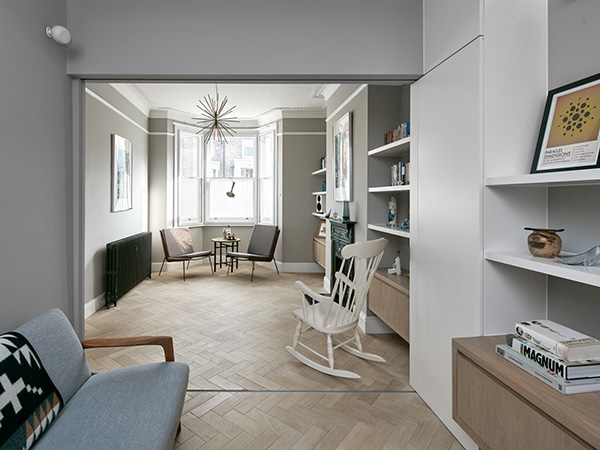 A classic herringbone floor is a statement floor – it always impresses; However, resist the idea of ​​using the pattern throughout your home as it can become monotonous over time.

5. Mark the walls in a herringbone pattern

In recreating the 1970s modernist past of the luxury Mercure hotels in Charlestown during their renovation, Webber Architects placed Havwoods Pallido planks on the wall in the reception area in a classic herringbone pattern to create a striking feature. With the prefabricated (laminate) boards, the work could be completed without interrupting operations. 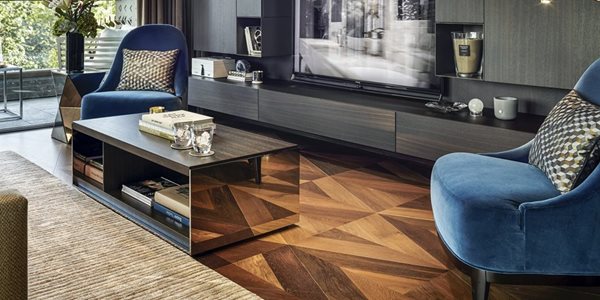 Herringbone tiles and wooden floors and / or planks are available in Sydney and Melbourne in 12mm thick tiles or wooden, laminate or vinyl boards.