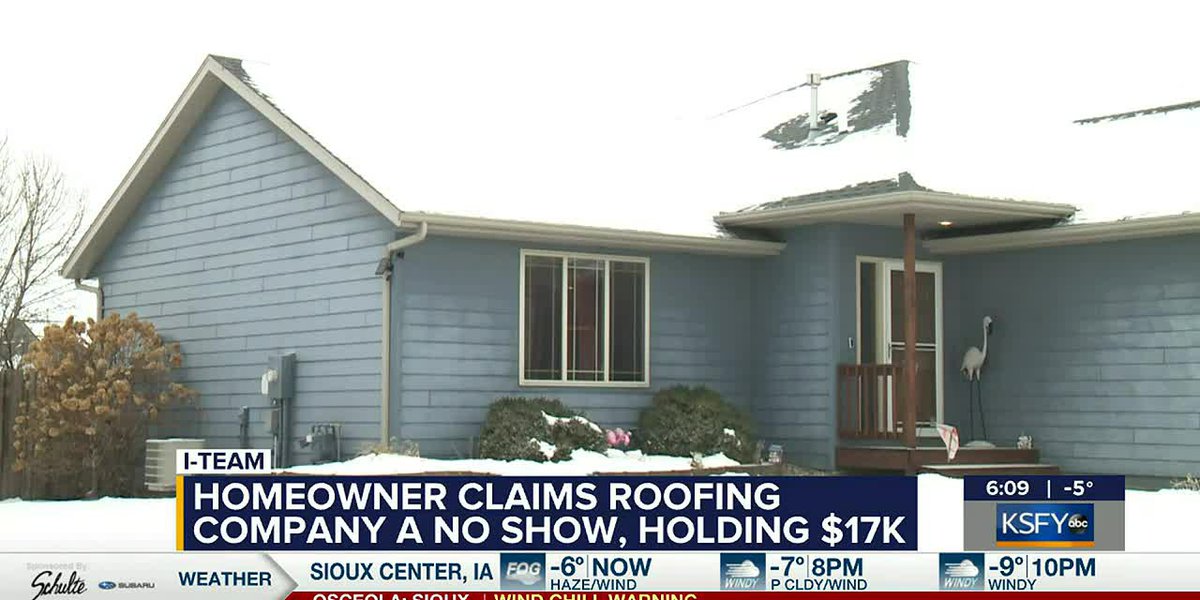 SIOUX FALLS, SD (Dakota News Now) -A Harrisburg man continues to wait for repairs to his home from a storm last summer. He claims his 17-thousand dollar payment hangs in limbo, out of his hands in the pockets of the owner of a roofing company. Hoping to get action, he reached out to our I-team.

When a storm rolled through last summer, Dean Marshall and his family discovered a lot of storm damage to the fence, a window, and his roof.

“They sent out an adjuster, and they gave us a check,” said Marshall.

Marshall says he remembers a sign in his neighborhood for Allphase roofing and their slogan:

“30 days from claim to complete, no one can compete,” said Marshall.

Having a friend just hired on at Allphase roofing, he felt there was trust that the company would repair the damage and gave them the amount the insurance company had given him.

He said after many calls to Allphase with no action to get the repairs done; he made a request.

“I’d like to get my money back so I can go to a credible business,” said Marshall. ‘It’s a 25% penalty.’ For what for you not doing your job?” Said Marshall.

Jessie Schmidt from the Better Business Bureau feels for the Marshalls.

“So empathetic to your consumers that are in this situation because they’re out a lot of money.

She believes more follow-up could help.

“What they need to do is determine if this is a criminal offense,” said Schmidt.

If you’re just beginning to call contractors, Schmidt says to ask if the company is licensed, bonded, and insured.

“What if somebody is working on your home and they fall off the roof? So you want to make sure that their insurance is going to cover that and not your insurance,” said Schmidt.

A typical downpayment to book a contractor is 30 percent, and another 20 percent on the day they arrive to do the work.

“Then, before you sign off on that contract and you make the last payment, you want to make sure that you’ve got lien waivers from the supplier of the materials. If they don’t pay for those shingles, that supplier has no choice but to put a lien on your property, and it’s legal,” said Schmidt.

You can compare company ratings at www.bbb.org.

“And we grade businesses A+ to F, just like in school,” said Schmidt.

In the meantime, Marshall hopes the company will do what he believes is right: give a 100 percent refund.

Our I-Team reached out to Allphase Roofing. During a phone call, a man identified as the owner and management said their slogan does not include the term “30 Days,” as Marshall had claimed. Allphase also says there are two types of roofing companies, and their kind takes a higher deposit as they work directly with insurance companies.

They also claim delays were caused by the Federal Government requesting they go to hurricane-affected areas. We asked for such documentation and did not receive it.

Allphase provided Marshall’s project files notes, showing what they say is documentation that his insurance company delayed the project.

In the meantime, Marshall says he and other neighbors have hired a lawyer.

Las Vegas Homeowners Hire Top Plumbers through Near Me Directory