For business owners, maintaining the proper balance of work and leisure can be a challenge. This is especially true if the company’s services are in high demand and the owner takes an active hands-on approach toward all aspects of the business operations. For Don Greenbauer, owner of Caledonia, Mich.-based Greenbauer Asphalt Inc., it’s a challenge he takes seriously, for himself as well as his employees.

Greenbauer became involved in the asphalt business in 1983 when he went to work for a local paving company. While there, Greenbauer learned the business from the ground up, starting out as a truck driver and moving up to equipment operators on pavers and rollers. After eight years with the company, he took a job at another asphalt paving and maintenance company as general manager.

After three years, Greenbauer decided to branch out with his own business and started Greenbauer Asphalt. He began operations in 1994 with two employees and a Puckett Brothers paver.

“My wife, Bridget, personally financed the Bobcat while we put everything we owned on the line to finance the rest of the equipment,” Greenbauer explained. “It was risky. I didn’t take a paycheck for the first year so we could keep our two employees paid. Thank goodness my wife had a good job.”

Greenbauer put in the long hours necessary and to maintain the work/leisure balance he valued. He remembers the kids tagging along at night when he was bidding so he could spend some time with them. He also recalls his wife driving to weekend getaways so he could catch up on estimates and phone calls in the car.

Rather than dedicate his efforts toward building his business with a growing number of employees, Greenbauer focused his attention on the quality of the work they performed. For Greenbauer, that still means being on hand for every project.

“If the company takes on too much business, we’d be spread too thin,” he said.

During regular business hours, Greenbauer can be found working on the job site, often driving a truck or overseeing the paving operations. The administrative side of running the business is now addressed by his wife or after hours during the week when it requires his involvement. With few exceptions, weekends are reserved for family and personal pursuits.

The operation is a true family business. When sons Aaron and Chase were in high school, they worked for the company during the summers and, like their father, learned the business from the ground up.

“Things really took off when both sons came to work for the company full time,” said Greenbauer. “They brought a fresh perspective and some great suggestions to streamline the way we were doing things.” 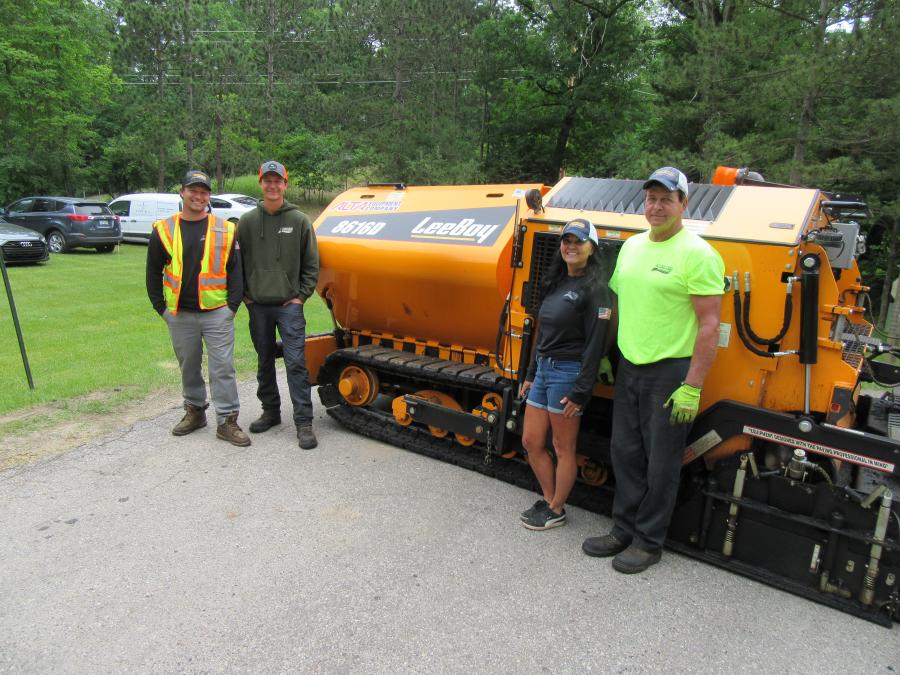 Aaron is now responsible for estimating and scheduling and jumps in to help the crew when needed. Chase is the crew foreman, paver operator and can also jump in a truck to haul asphalt if needed. Both boys are trained and versatile in all aspects of the company and on all equipment.

“They were both very involved with the research and final decision to purchase a LeeBoy 8616D paver,” said Don.

Greenbauer’s approach has paid off and in the 28 years the company has been in business, the company has gained a reputation for quality work that spans from Grand Rapids to Lansing, Mich. As a result, the majority of the company’s work comes from long-term clients and personal referrals.

To meet the demand, Greenbauer Asphalt Inc. has grown to a select team of 14 employees conducting paving and asphalt repair services within a 50-mi. radius of the company’s home base. The company’s business mix is ​​made up of 60 percent commercial projects and 40 percent residential work. Some of the work includes retail store parking lots including West Michigan Lumber, Midway RV and the Gun Lake Community Church parking lot.

Along with their father, Aaron and Chase make up part of the work crew on every job. They see the wisdom in their father’s regard for maintaining a balance of work and leisure.

“We love working hard Monday through Friday, that way we earn the time off on weekends to reset,” said Aaron.

Greenbauer understands the need for quality equipment backed by strong manufacturer and dealer support to achieve quality results. In 1999, he replaced his old paver with a new LeeBoy paver purchased from Tom Colwell, who worked for the dealership that at the time represented LeeBoy products.

After running the LeeBoy paver for nearly 20 years, Greenbauer elected to experiment for his next purchase and went with a different manufacturer. Although that machine performed well, he found LeeBoy pavers and the support he received from both the manufacturer and dealership were the right fit for his company. 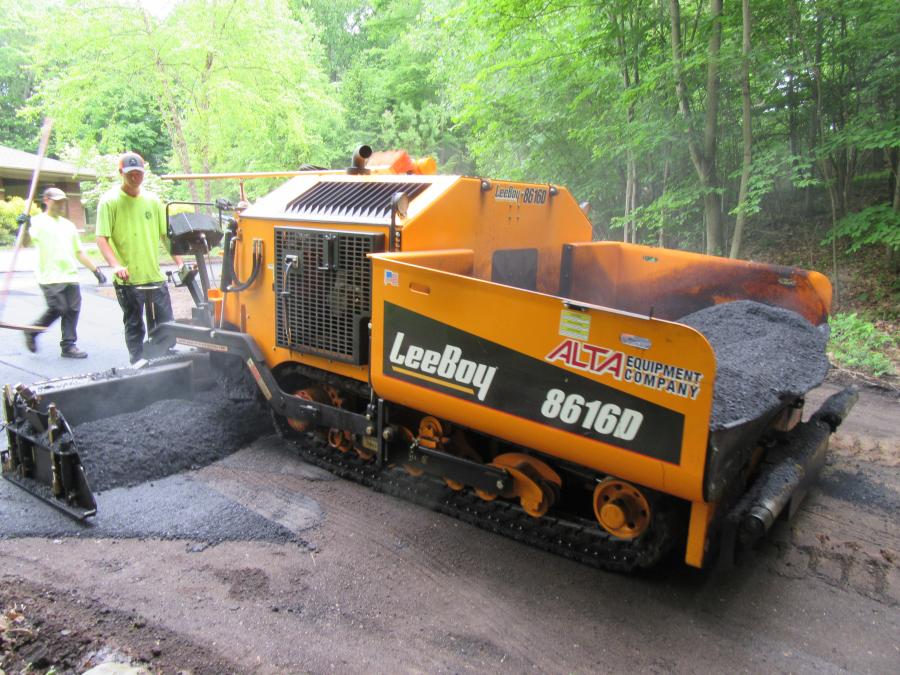 When he made plans to purchase a new paver, not only was the LeeBoy name familiar to him, but so was the dealer representative who called on him. Tom Colwell’s nephew, Travis Colwell, had joined Alta Equipment Company as road products manager of Michigan and was the salesperson who worked with Greenbauer Paving on the acquisition of his new LeeBoy 8616D asphalt paver.

“We appreciate the service we receive from Alta Equipment Company backed by the LeeBoy factory support,” said Greenbauer. “Alta’s response time is awesome, they’re available any time, day or night, to address our needs or if we have a question or concern. LeeBoy has been the only manufacturer that has ever sent a rep out to make sure things were going well.”

“We really liked our old LeeBoy and the new LeeBoy 8616D asphalt paver delivers the quality results we look for on our paving projects,” he said.

Putting it to work

On a recent job in Grand Rapids, the outstanding performance capabilities of the LeeBoy 8616D asphalt paver were on full display. The job involved paving a private road to multiple homes situated in a woodland setting. The roadway was narrow and encroaching trees affording tight space on both sides as well as overhead.

“We do a lot of private roads so the current job, calling for between 400 to 600 tons of asphalt, is fairly typical,” said Greenbauer.

Because residents would be limited to walk-in access to their homes for the duration of the job, time was a major factor. Greenbauer Asphalt called in a subcontractor to bring in a milling machine to prep the roadway prior to paving. Once completed, Greenbauer Paving followed with its LeeBoy 8616D asphalt paver to lay down a base layer of asphalt on day one and finished the project the next day. 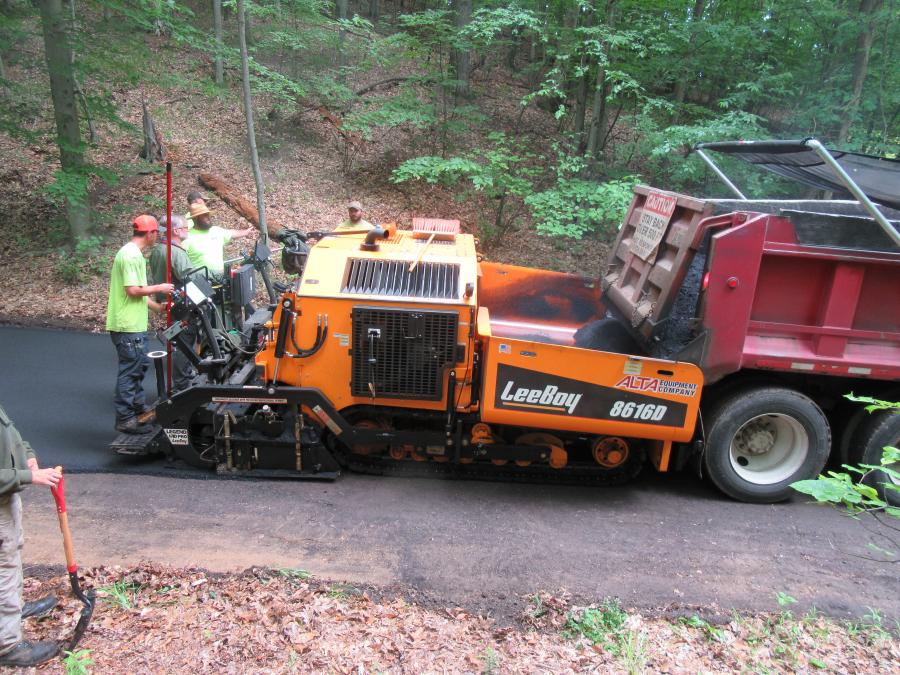 Greenbauer was impressed with the paver’s performance, pointing out several key features that make the LeeBoy 8616D asphalt paver a standout machine.

“The new paver has plenty of power. The track system on the 8616D is longer which gives more floatation for a smoother ride and therefore a smoother mat,” he said.

Paver operator Eric Smith agreed with Greenbauer about the smoother ride and added to the list of the paver’s beneficial features.

“The hood design of the 8616D offers great line of sight to the truck while loading,” said Smith. “It’s also quiet and maneuvers well around corners, which is important because we work on a lot of jobs in fairly confined areas. The 9-ton hopper provides more capacity but is still great for jobs with tight access.”

Smith also appreciates the ability to open and shut one side of the hopper to run the paver from the screed. In addition, he pointed out a feature that has become increasingly significant due to rising fuel costs.

“The 8616D automatically idles down when not in use for better fuel efficiency,” Smith said.

The 8616D asphalt paver includes many of the key features of a highway-class paver while maintaining a footprint well suited to commercial contractors seeking a heavier unit in a highly adaptable model. The flexible spontaneous design allows the operator an ability to quickly switch the unit from high deck to low deck. The 8616D conveying system with variable speed augers delivers consistent material flow and the Legend HD PRO screed generates higher quality mat.

Warrant issued for masonry contractor accused of taking deposit from Apollo man, not…