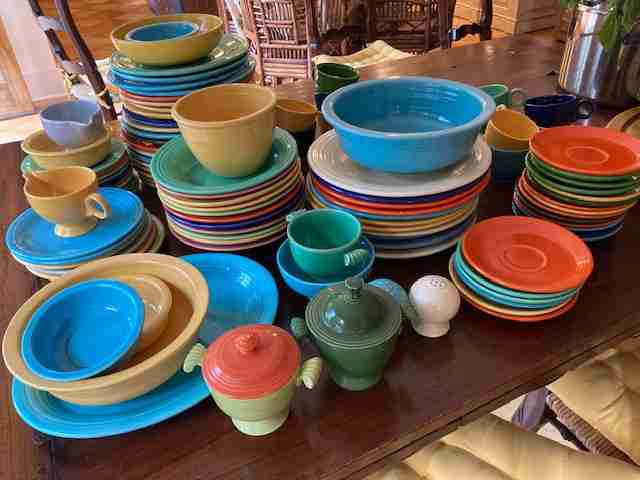 Submitted by a Colts Neck resident

From the street, we could see the typical collection of used household goods on display in front of the opened garage door. It all seemed pretty boring, but then we both saw it at once: a big, old picture frame – really more of a shadow box – and in it were a dozen or so stuffed birds beautifully displayed in naturalistic poses. When we asked her about it, the lady said that she had lots more of that kind of stuff inside. “You should come in and take a look. I’d really like to get rid of it all.”

Crowding the small living room were more birds in shadow boxes and a lot of other kinds of stuffed animals. Everywhere we looked, there was a different creature: foxes, wildcats, raccoons and rabbits were scattered all around the room. Hanging on one wall was a giant sailfish, and across from it on another wall were two wild boars’ heads with fierce-looking tusks sticking out the sides of their gaping mouths. Standing over in a corner by an old-time juke box was a huge grizzly bear clawing the air and ready to attack. The lady told us that her grandparents had operated a saloon in North Jersey in the 1940s, and it was decorated with all this stuff, and she said there was a lot more in the basement.

We followed her downstairs as she began reminiscing. She was a little girl when the saloon was in all its glory, and she told us in great detail what it was like back then. Every morning she would stop in to visit her grandpa as he was getting the saloon ready to open. He would give her a big red maraschino cherry to eat on her way to school. Then on the way home in the afternoons, she would stop in, and in exchange for a kiss, he’d give her a brand new penny to spend at the candy store across the street.

She told us that back then, every tavern gave their patrons free food with the drinks at lunchtime. Some gave just peanuts or pretzels or hard-boiled eggs, but others gave their customers more elaborate meals. At her grandpa’s saloon, one whole side of the big barroom was devoted to the free lunch counters. She described all the different exotic foods they offered and how beautifully it was all displayed. She remembered giant cauldrons of boiling hot soup and trays of vegetables. Three men in tall white chef hats would sharpen their knives on long, wooden handled sticks of steel as they sliced ​​up huge slabs of pastrami and roast beef to make sandwiches to feed the waiting businessmen.

Her basement was crowded with more stuffed animals and dozens of elaborately designed sporting trophies from the early 1900s, as well as boxes of old beer mugs and silverware. On a table off to one side were stacks of colorful fiesta-ware bowls and plates. We couldn’t believe our eyes; we had always been fascinated by that mid-century china. We love the unique shapes and the great, south-of-the-border colors. Though it was considered cheap tableware when it first came out in the 1930s, in the past few years, these pieces have become so collectable that the prices have become prohibitive. The lady had more than 100 pieces of it, and she was only asking a few dollars for the whole lot. We just couldn’t resist – now, where do we put it all?

The old trophies were wonderfully designed, most of them in the Art Nouveau style, and each one was unique and beautifully made. Some of them even looked like they were hand-hammered out of pure silver. We know a guy who is looking for that kind of thing for the old-time bar room he’s creating for himself in his basement. We called him, and after we described them to him, he said he’d buy them all, sight unseen – the old juke box too – and that he’d be right over.

Since it was right around lunchtime, while we waited for him to show up, the lady made up some nice roast beef sandwiches. She served them to us on paper plates, but the beer she gave us was in the old mugs from down in the basement – ​​and just like in her grandpa’s saloon, the lunch was free!

Local Newcastle Plumber Explains How the Cold Weather Can