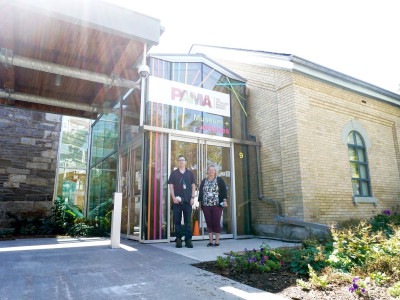 Kyle Neill never thought he would see the meeting minutes of Chinguacousy Township—now modern-day Brampton and Caledon. The archivist at the Region of Peel thought the remnants of these meetings which took place more than a century-and-a-half ago were either too delicate or had been lost to time.

Bits of dialogue and notes scrawled onto sheets of parchment paper could tell the story of Peel, after First Nations had looked after the land for thousands of years. The lost minutes left a gap in the region’s history, like a jigsaw puzzle whose missing pieces fill in the finished picture.

That was until an unexpected donation.

“So eight years, that were more or less just lost to the mists of time, are now back,” Neill told The Pointer. “I can’t tell you how exciting this is.”

It started with a rumor told to Nick Moreau, another Peel archivist. A family, descendants of one of the late Wardens of the Chinguacousy Township—the equivalent of modern-day mayors—who took records home with him came forward. At Moreau’s request, they gave the documents that were collecting dust at their homes to The Peel Archives, unlocking a door to a section of the area’s history which archivists had thought was lost forever.

The minutes tell the story of the first council meeting of the Chinguacousy Township, they provide valuable insights into decision-making and governance in the region’s early years. The minute book includes meetings from 1850 to 1857.

On Tuesday, February 19th, 1850 the council met and was called to order with all members present. The school board came requesting funding for education programs for less fortunate children.

“By Mr. Hamilton of trustees of School Section No. 13 [Nortonville] praying the same may be assessed in the sum of five pounds, to pay for tuition of the children of the poor and indigent therein,” the minutes chronicle.

The request was approved with an updated “School Act ”.

Discoveries like these make the job of preserving the region’s history the most exciting for Neill.

Documents like the Chingaucousy Township minute book turn up unexpectedly, allowing archivists to piece together more of the region’s history.

Archivists ensure the public has access to records and centuries-old stories of the region’s history which are made easily accessible. They are asked to help connect the dots that explain the culture which shaped our society.

The Region of Peel Archives is part of the Peel Art Gallery Museum and Archives (PAMA) a small cluster of historic institutions run out of the old jail/courthouse in downtown Brampton. The building is as old as Canada.

Although located in the heart of Brampton, the archives team is the official record keeper for the entire Region of Peel, including the early history of Mississauga, Caledon and Brampton.

Throughout history, there have been some key figures who served as the townships’ unofficial historians. In the 1930s, William Perkins Bull was one of those who started collecting Peel’s history.

He brought together approximately 300 boxes of material and wrote numerous books on the natural history of the area. Original surveyor’s notes of where trees grew and early maps of Peel County (what the region was called prior to 1974) are preserved thanks to Perkins Bull. The historians of today are grateful to the early pioneers who understood significant events and the moments in their lives that made a mark on the story of Peel. These have been chronicled in documents for future generations. 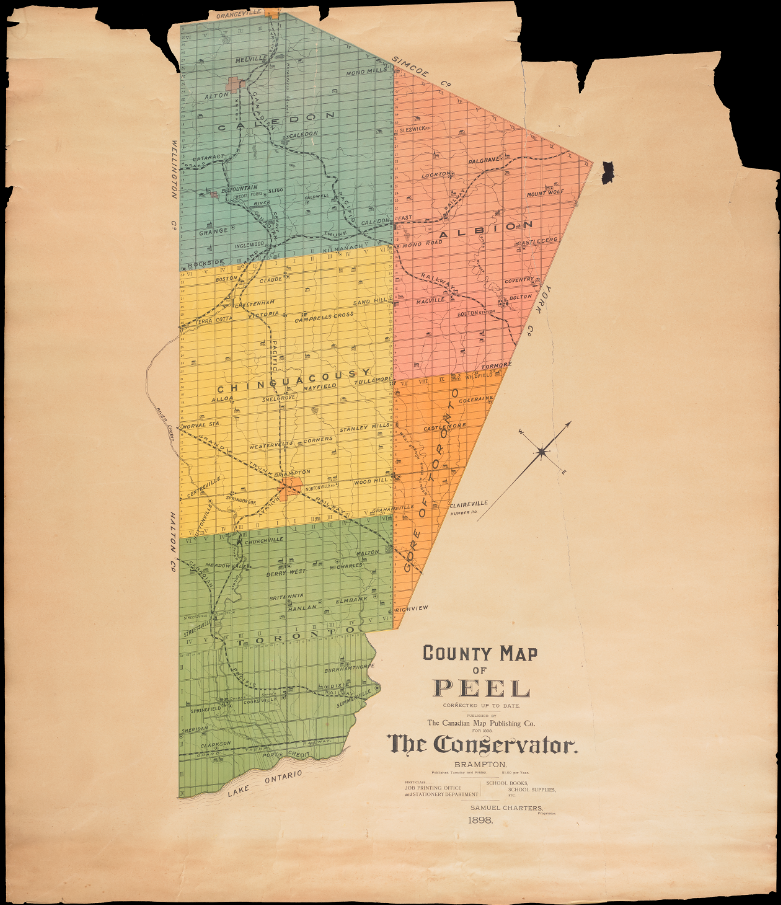 Peel Region was split into five townships that each had governance bodies, taxes and rules. The map above is from 1898.

But as robust as these documents are, they do not always tell the whole story.

History was collected predominantly by white, upper-class males. Their perspectives on historical events are drastically different from a young, indigenous woman, an early non-European worker or an African American who arrived in Canada through the Underground Railroad. The stories of early European settlers who were not wealthy are also largely absent from the records. Those “children of the poor and indigent” were seldom given their own voice. Access to education was difficult for much of the population, whose stories were shared orally, not in writing.

The Canadian government forced Indigenous people to assimilate with European culture, children were sent into the residential school system, losing their oral historical narratives, which spanned thousands of years, in the process. This was the intention of the government of the day, largely shaped by centuries-old policies imposed by the British Empire throughout its brutal history of cultural destruction across its former colonies.

There are remnants of First Nations history.

“They do interact with our records in some ways,” Neill says of the early land owners. “There’s some stuff in the land registration records that deals with former, ‘Indian lands’.”

Due to the violent way early colonizers stole and displaced the Mississaugas of the Credit, much of their history is told through a settler lens.

“William Perkins Bull was very interested in early history, so he did a lot of digging on Indigenous peoples,” Neill said. “He’s got some neat stuff in there in terms of asking early settlers; did you work with the indigenous community in any way? And how did you interact? We have a lot of those anecdotes, but in terms of theirs [Indigenous] perspective, we don’t really have any.”

This is why personal history is important to the Peel archives. It helps piece together not just the stories of those in power, but of everyday civilians and those groups who were denied opportunities enjoyed by the established class. 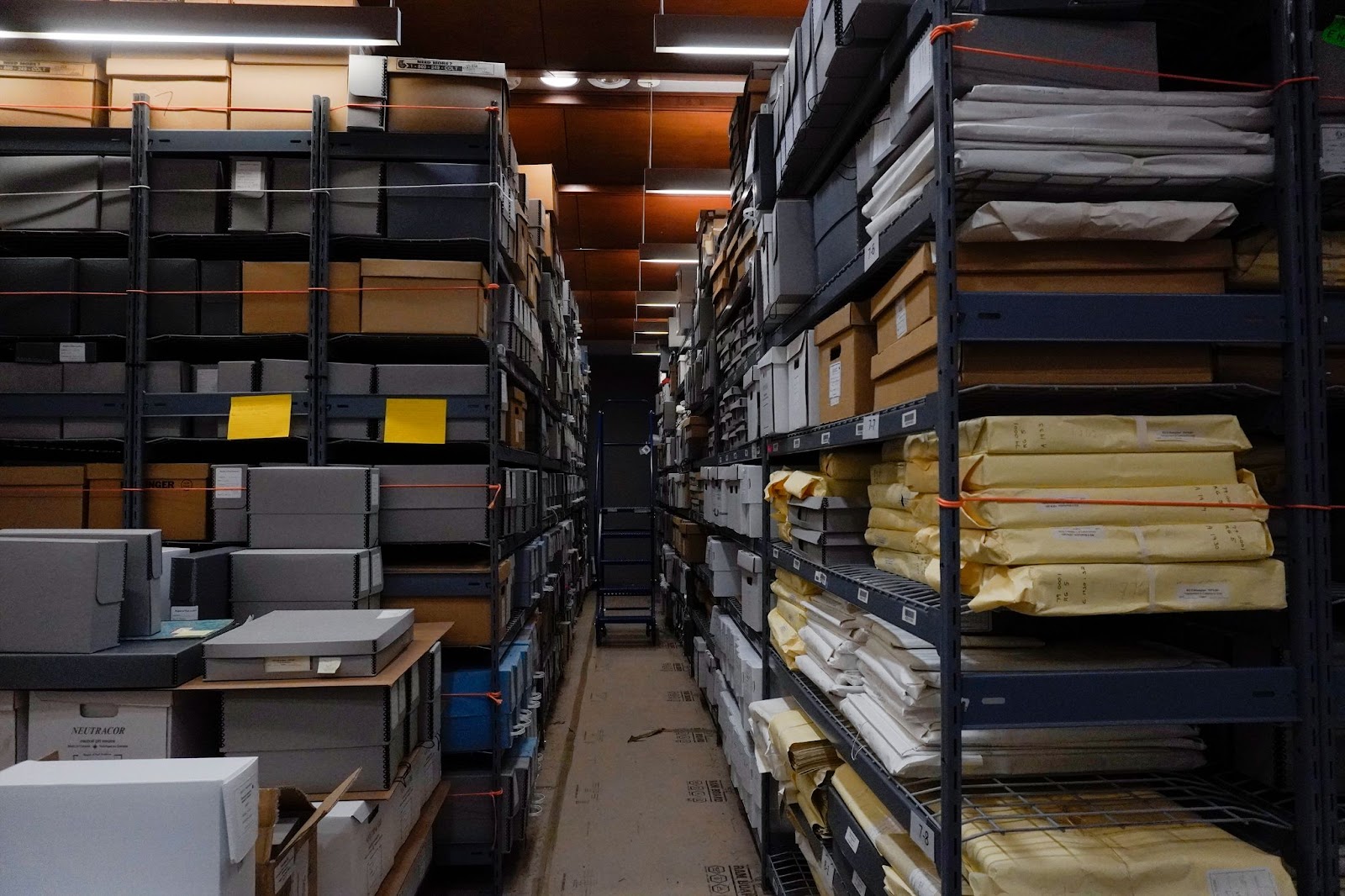 Currently, storage rooms and offices are filled with Peel’s history as construction in the vaults continues. Staff have organized the boxes and made sure humidity levels don’t damage the historic documents.

Seemingly unimportant diaries and keepsakes are stored in basements or attics of people’s homes, where the fragile paper will eventually decay beyond recognition.

PAMA has a sophisticated system that works to prevent the erosion of these documents and artifacts caused by the passing of time.

Exposure to natural elements is a problem.

Moisture is one of the most dangerous elements for old paper, which can grow mold if left unprotected for extended periods. Mice, although common and annoying, rarely eat through an entire document and mostly nibble at the edges. Neill says fire is not inherently dangerous (or common), but water is what destroys the document in the end.

Consistent humidity is the worst enemy.

To protect the invaluable records, Peel archives is undergoing a $1.6 million upgrade to its HVAC system. The air filtration unit, to slow or even stop the decomposition of documents, is long overdue. 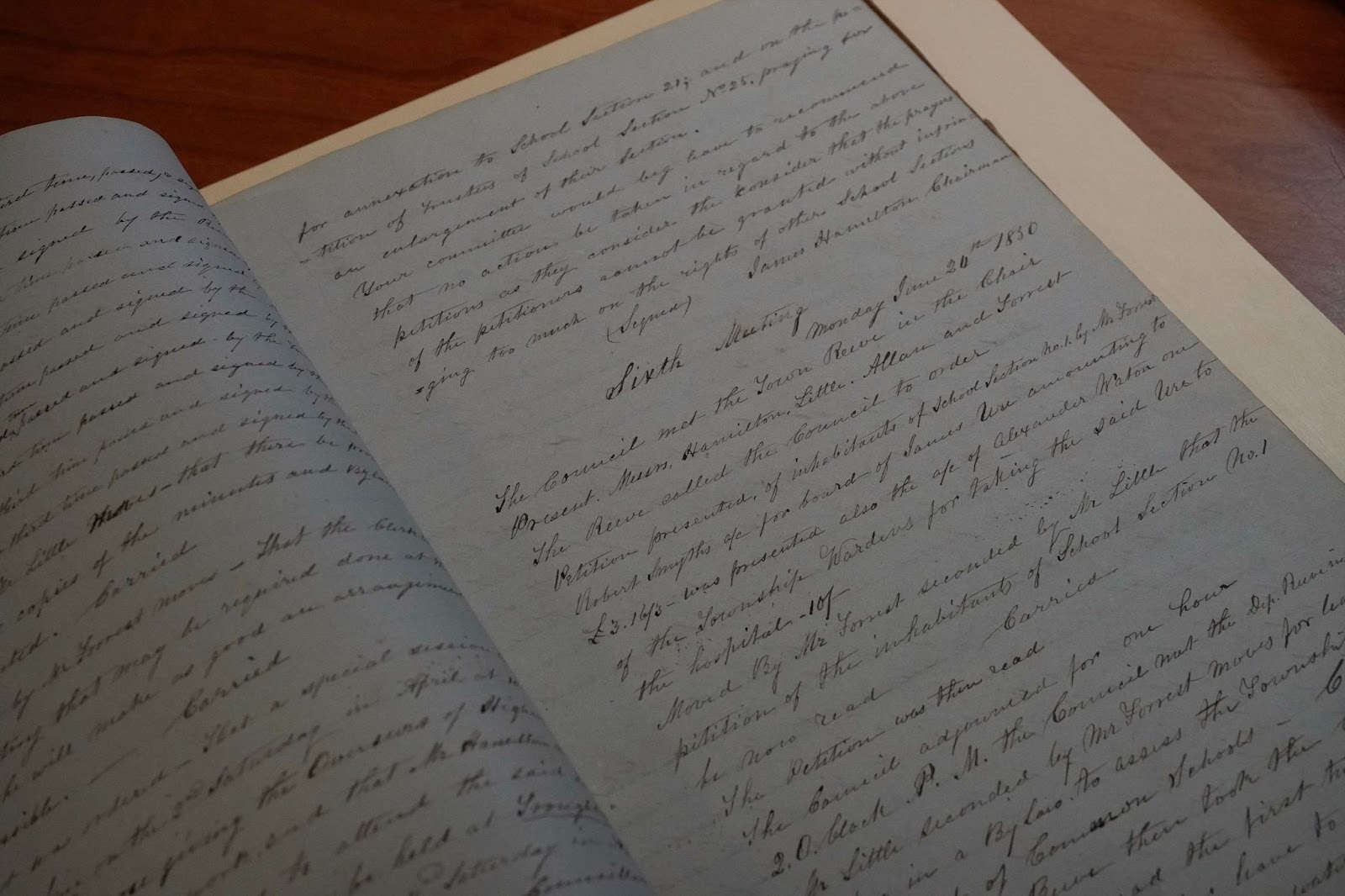 Historians and archivists are trained to read cursive handwriting and are knowledgeable of common words used during different time periods.

Prior to construction, the archives team would use dehumidifiers to keep levels under a certain threshold. The system is from the ’80s and had small repairs done before the replacement began last year, continuing throughout 2022.

The walls of the heritage building expanded and contracted as the humidity levels rose and fell, the increasing stress on the building meant no matter how good the system was, moisture would seep inside. Instead of simply replacing the old HVAC system, the crews needed to build a room inside a room.

“It’s because of the heritage fabric of the building,” Neill said. “It just wasn’t cutting it.”

Each room received upgraded fire suppression systems, which use gas to extinguish fire as opposed to sprinkler systems.

Underground there are three areas Peel Archives keeps records, the primary, secondary and museum vaults. Although the term ‘vault’ conjures images of a large room, the three spaces are quite small.

“Mississauga, Brampton, Caledon all have their own record centers and they’ve basically held off donating stuff to us because they know we don’t have the space,” Neill said. “If I tell them tomorrow that I’ve got more space, I have thousands of boxes coming up.”

Staff have been working tirelessly to restore order to the chaos as the group navigates where to put records safely and how to transfer them digitally. 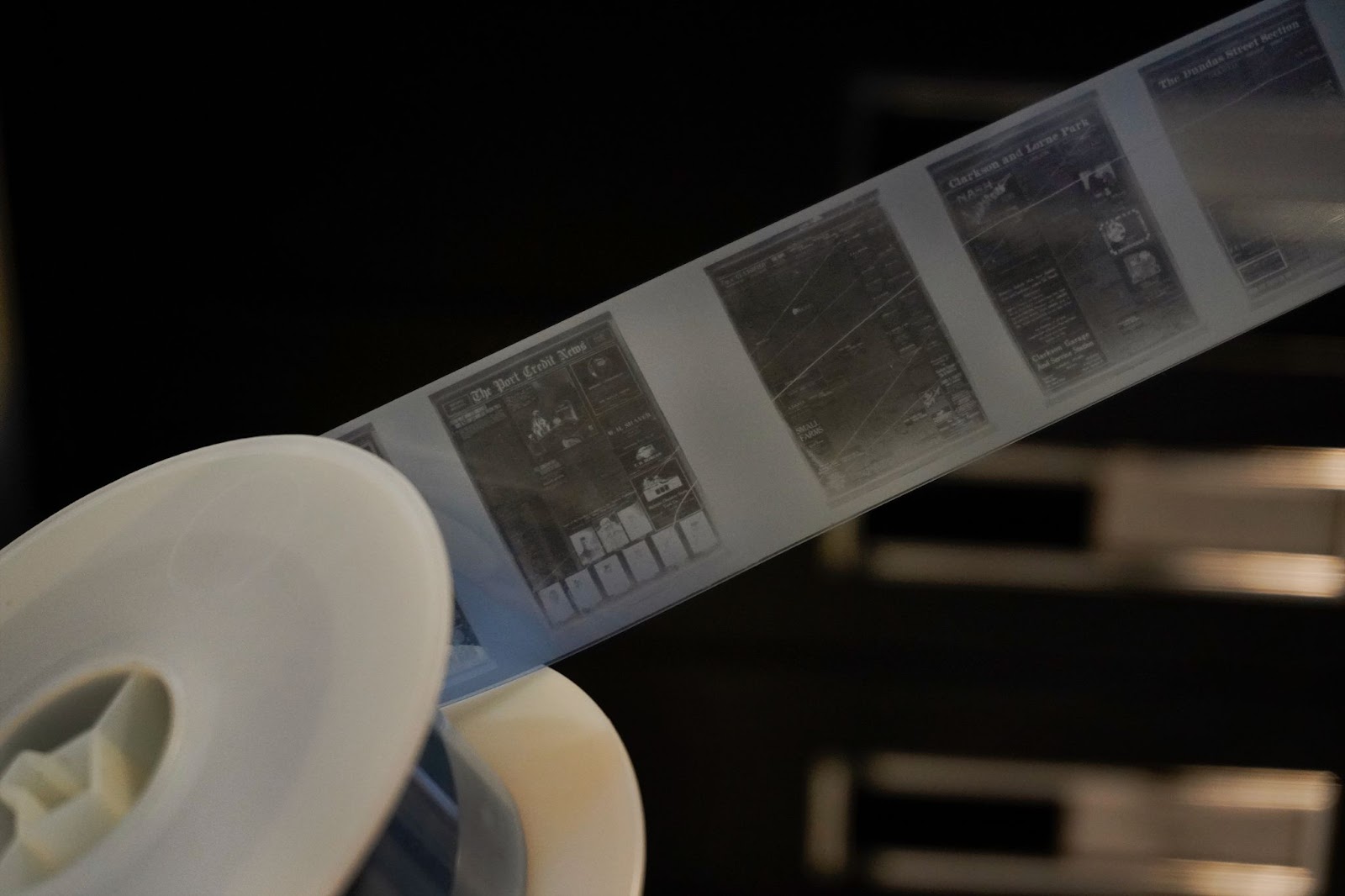 The Port Credit News’ first page from the 1920s is kept safely within microfilm at Peel Archives.

Microfilm is one of the best tools used by the archival team, allowing months of newspapers or records to be stored on compact film that can be seen in detail through a projector. The frail newspapers are considered public documents and if people are not careful, could be ruined completely. If put on microfilm the public can download the sections needed on a USB drive.

“In terms of cost efficiencies this is by far the best use of money,” Neill said. “These are also very stable because it is safety film, you can get it wet and just wipe it off.”

One roll of film which can hold thousands of pages costs the organization $120. There is a fear producers of the film could eventually stop making them which would put Peel Archives, along with many other museums around the world, in a pinch. The organization is looking at other options.

The push is towards digitization and away from microfilming, but until all rolls are scanned, access to the film is important. 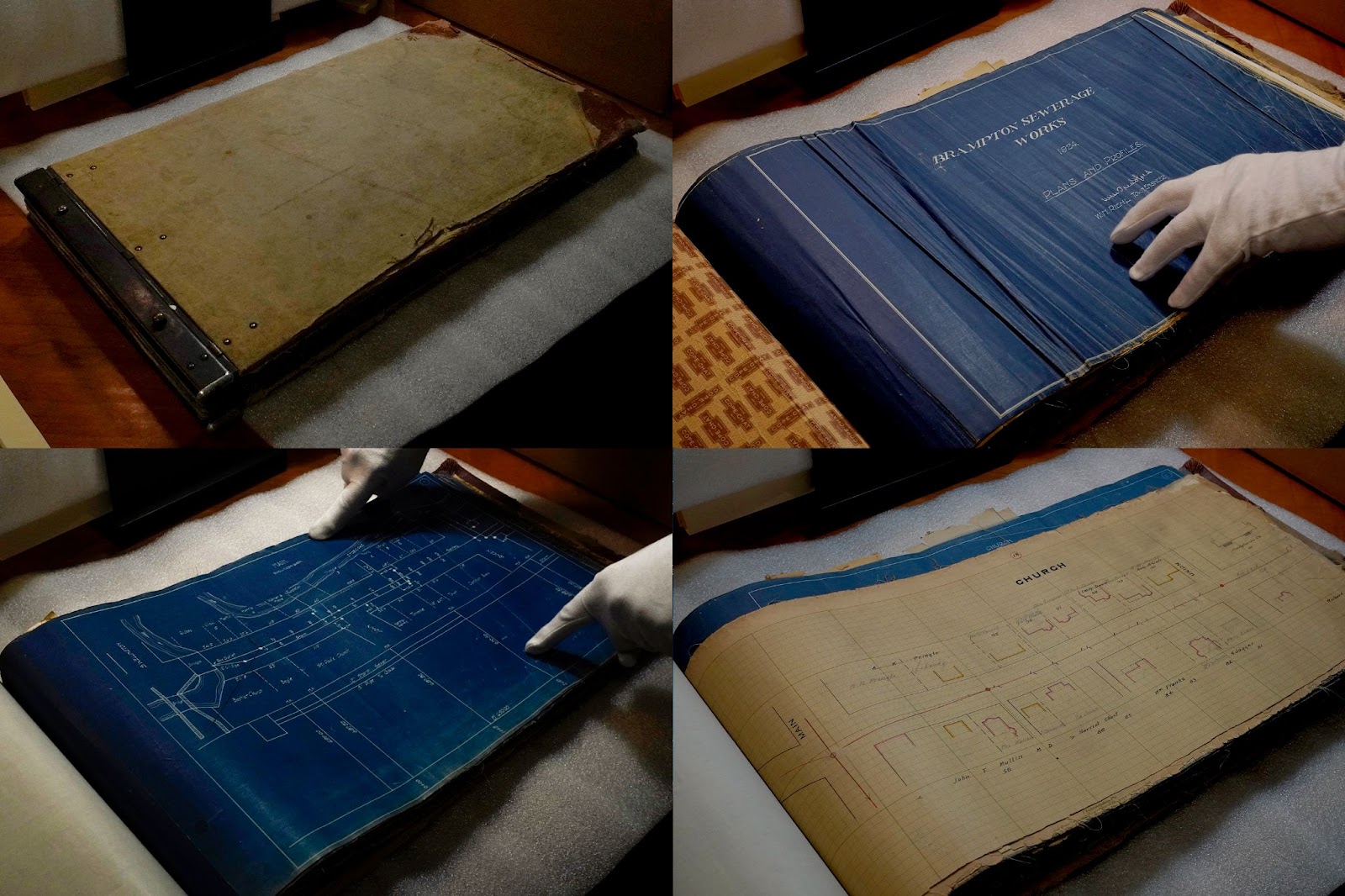 A bound book labeled “Brampton museum” found its way to Kyle Neill’s desk a few months ago. The original drawings showcase sewer lines in Downtown Brampton. He says the book turning up is “an archivist’s dream”.

Peel Archives’ funding is lumped in with PAMA. In 2022, Regional Council allocated $600,000 to PAMA for state of good repair projects. The approved operating request was $100,000 and maintaining current service levels was the priority. Throughout the COVID-19 pandemic, PAMA was one of the Regional program recipients of funding from higher levels of government, ensuring projects like the HVAC system continued as planned. There are 22 full-time staff currently working with PAMA.

But Peel Archives need more funding to expand the known history of the region. It’s difficult for the organization to demand more money when it competes against emergency services.

But preserving the region’s history for future generations, many would argue, is vital to understanding who we are, and where we’re going.

“It’s kind of navigating and finding that balance,” Neill said.

COVID-19 is impacting all Canadians. At a time when vital public information is needed by everyone, the pointer has taken down our paywall on all stories relating to the pandemic and those of public interest to ensure every resident of Brampton and Mississauga has access to the facts. For those who are able, we encourage you to consider a subscription. This will help us report on important public interest issues the community needs to know about now more than ever. You can register for a 30-day free trial HERE. Thereafter, The Pointer will charge $10 a month and you can cancel any time right on the website. Thank you