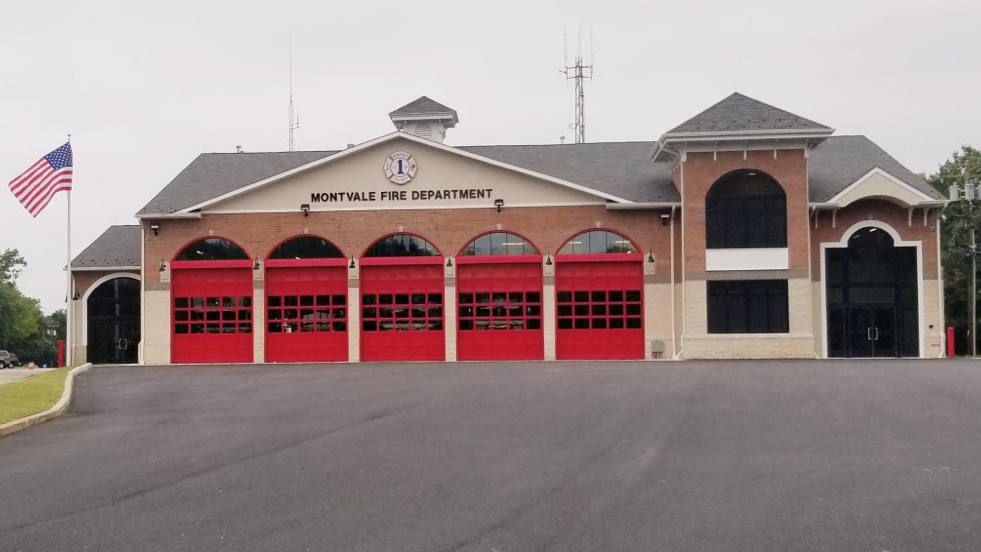 Montvale is investigating a leaky roof at its new fire headquarters. Meanwhile, the builder at the Township of Washington’s new emergency services building had to reinstall the project’s roof and improve a number of roof trusses.

MONTVALE—By the next Borough Council meeting, Tuesday, Jan. 25, officials hope to learn whether the firehouse roof needs additional repairs — or possibly replacement, as suggested by a roofing contractor repair.

After a roof leak was found in summer 2021 and repaired, longtime borough engineer Andrew Hipolit, senior project manager with Colliers Engineering and Design — formerly Maser Engineering — reported to the Borough Council on Dec. 28, issues found and mentioned by a roofing contractor are not structural concerns.

“Therefore, we recommend that the roof be inspected by a consultant who specializes in roofing,” he said.

He added, “Obtaining the opinion of a roofing consultant, as opposed to a roofing contractor, will give the Fire Department a more objective answer.”

On Jan. 11, officials approved a resolution for up to $5,000 for a roof inspection to be done by Roof Maintenance Systems at Colliers’ recommendation.

“After a recent leak in the roof, the Montvale Fire Department was informed by a roofing contractor that there were concerns with the overall installation of the roofing, specifically the plywood sheathing. The roofing contractor recommended that the best solution would be to rebuild the roof (plywood, insulation, and shingles),” Hipolit wrote.

“The roofing contractor also noted missing H-clips between plywood sheets and issues with the connections from the plywood to the steel trusses. Based on our observations, we were able to confirm there are missing H-clips randomly throughout the roofing system,” Hipolit said.

The $5.3 million firehouse, at 35 W. Grand Ave., was completed in summer 2018, and saw a grand opening that October. It replaced a 60-plus-year-old structure that had been eyed for replacement for more than a decade.

In August 2021, we reported that Fire Chief Geoffrey Gibbons said he was awaiting repairs from a roofing contractor. He said the leak, discovered in the engine room following a heavy summer shower, “appeared to be of a common type in a valley where the front comes out of the main roof.”

Gibbons said at the time that a walk of the roof identified where the leak was but until shingles were taken up to do the repair it was impossible to know the extent of any remediation required.

Hipolit wrote, “We were only able to locate an isolated issue with the connections between the plywood and trusses. In one area, it was noted that the screws from the plywood into the steel truss were close to the edge of the truss.”

He added, “Overall, it appeared there were ample screws/connections between the plywood and trusses … From a structural standpoint, we did not observe any deficiencies in the roofing system. All trusses appeared to be in good overall condition, with plywood sheathing securely attached to them.”

Hipolit recommended that Roof Maintenance Systems, a consultant Colliers previously worked with, to be hired to conduct the inspection for $5,000.

Council approved this outlay on Jan 11.

We reached out to Gibbons for comment but did not immediately hear back.

The firehouse’s architect, Robbie Conley, is architect on the Township of Washington’s joint volunteer firehouse and ambulance headquarters rising at 656 Washington Avenue.

Moreover, in 2021 a subcontractor needed to replace plywood sheathing — and the entire roof — following its installation during a summer rainstorm, as observed by firefighters and officials who reported the subcontractor’s inadequate work.

An inspection by Conley found wet sheathing; Due to roof shine manufacturer installation specs to ensure its warranty, Conley required the subcontractor to replace wet underlayment and re-shingle the roof.

He recently told Pascack Press that remaining bonded funds should cover all costs needed for project completion by its latest push-back debut: April.