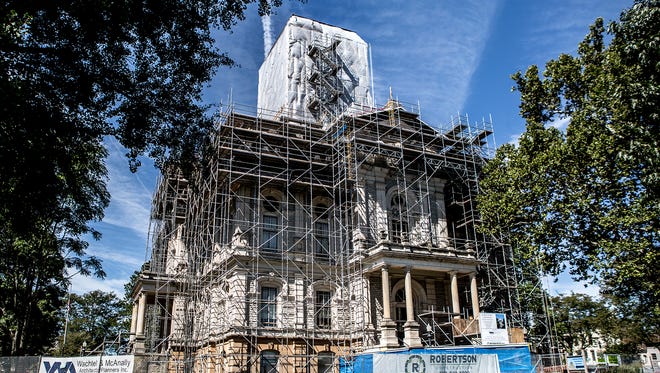 NEWARK – The nearly 100 windows in Licking County’s courthouse that were removed from renovation projects in 2010 and 2016 are ready for permanent replacement next year.

Tim Bubb, Licking County commissioner, said the project was neither cheap nor fast, but the time was right. The preliminary cost estimate is at least $ 1.25 million. Work could begin in spring and is expected to end in 2022, he said.

Earlier efforts failed for technical or financial reasons. Retired Court Clerk Gary Walters transferred $ 1 million from the surplus of the Title Certification Fund to the county general fund for the project. He contributed $ 2 million to the $ 10 million renovation of the courthouse a few years ago.

“We thought it was too good an opportunity to pass it up,” said Bubb. “We’ve approached this process twice. It’s a collection of old windows in a historic building that don’t look good and are leaking.”

Some of the windows on the first floor are from the 1876 construction, but most are replacement windows from the 1930s and 1940s. They come in a variety of sizes, including courtroom windows that are approximately 12 to 13 feet tall. It’s hardly a standard window replacement project done in an old house.

In 1978, the county added central air conditioning and storm windows to the historic structure.

“It depends on what type of replacement windows you choose,” Bubb said of potential complications. “We want historic-looking windows with 21st century technology. That will be the challenge. It’s a process like custom remodeling. We’ll be using it for the next half century.”

In 2009-10 the commissioners planned to replace the windows in a multi-million dollar, 25-building energy saving project that included new stoves, boilers, insulation and water heaters.

“Court windows were part of it,” said Bubb. “But some windows are very large and the manufacturer came back and said they weren’t sure they could make large windows with the safety specs. That was a huge frustration a decade ago. We had to resign.”

“We went back to look at it,” said Bubb. “It got very expensive, so we had to withdraw.”

Five circular 3 foot tall Tiffany stained glass windows near the ceiling of the historic West Courtroom on the second floor were removed and restored during the 2016-17 renovation, and returned in 2019. The historical images show George Washington, Thomas Jefferson, Ben Franklin, James Madison and The Marquis de Lafayette, a Washington adjutant.

The building is the fourth courthouse in the county, all of which were in the same location in the center of downtown. It replaced a courthouse that was destroyed by fire in 1875 and survived a fire in its dome in 1879. The courthouse was added to the National Register of Historic Places in 1973.