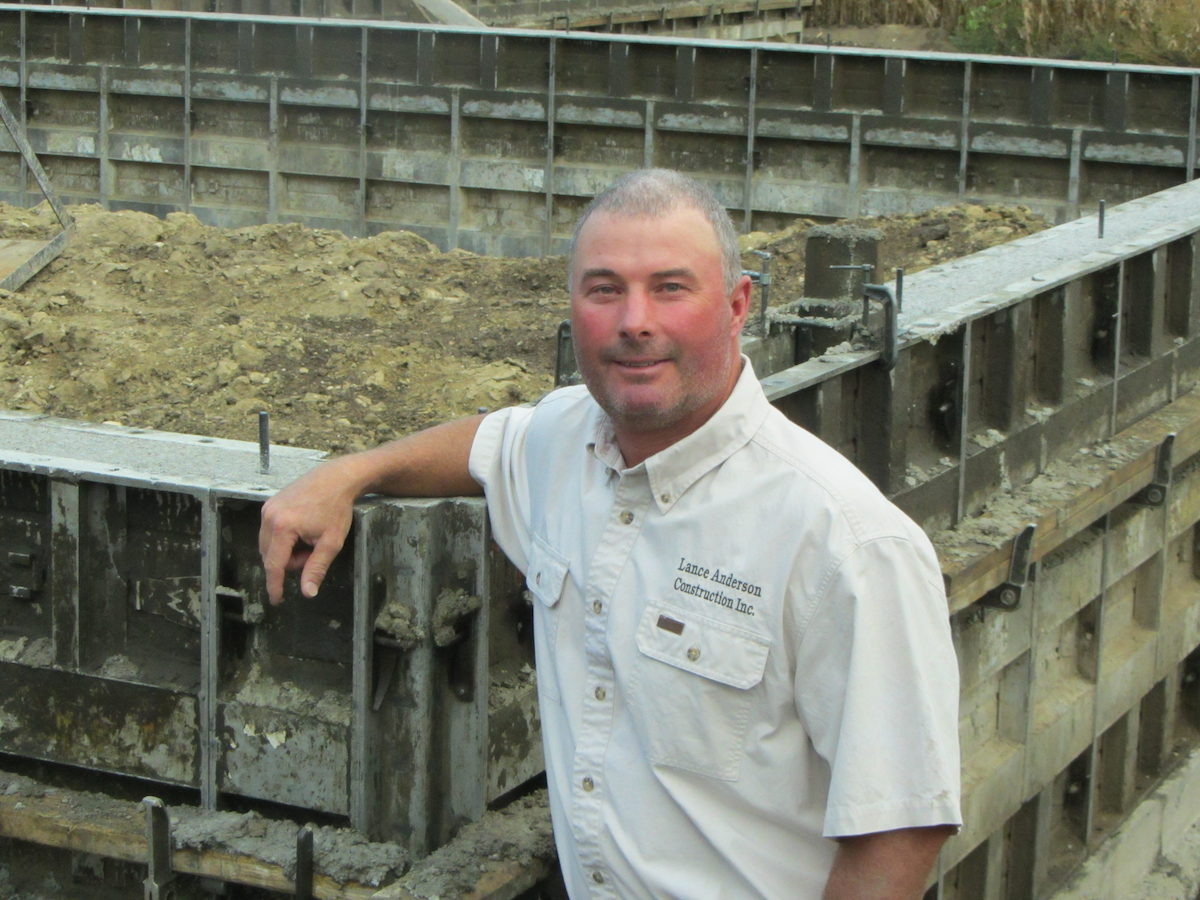 Owner of Lance Anderson Construction Inc. (Yankton, South Dakota), Lance Anderson has a passion for precision in every foundation and wall he builds. On average, he and his crew place 115 foundations per year, but now he is striving to make concrete houses an acceptable form of housing construction compared to traditional timber-framed houses.

Like his father before him, Anderson is a civil engineer. His skills have helped him to be a successful building contractor. The company was founded in 1978 by his parents Wayne and MaryLou Anderson. After three years in the Los Angeles Public Works Department, Lance found a reason to return to his South Dakota roots.

“At the time my wife was pregnant and my father lost several members of his crew,” he says. “I returned to South Dakota in 1992 to help my father with the business.”

Anderson helped the business flourish, and in 2006 he and his wife Lisa bought the business from his parents. Lisa manages accounting, vehicle movements, wrapping, and licensing, along with numerous other front office business functions. The contractor is performing work in three states – South Dakota, Nebraska and Iowa.

As a manager, Anderson is present on every construction site when placing foundations and walls. He says he’s approaching 2,800 foundation placements this year since returning to the business in 1992. While other contractors his own kind have focused on diversifying their businesses, Anderson says he has no interest in expanding beyond foundations and walls.

“I want to pour walls and be the best at it,” he says. “We’re very successful right now and I think contractors who specialize in fewer products seem to be the best. For us its foundations and walls. I have the advantage that I can choose who I want to work for and which jobs I want to do. “

While he is committed to continuing his legacy of outstanding foundation construction, he also sees an opportunity in building concrete houses and storm shelters.

“All over the country you can see the devastation that occurs after a hurricane or tornado destroys neighborhoods and cities,” he explains. “And every time a weather disaster strikes, I think it’s that simple – rebuild those areas with concrete enclosures.”

One of the key events that sparked Anderson’s interest in concrete houses and shelters occurred in 2008 when a tornado pierced the Little Sioux Scout Ranch in Iowa. The tornado killed four Boy Scouts and injured 48 others.

“I know the people who run Lewis and Clark’s Boy Scout Camp in Yankton, South Dakota, and I thought with so many Boy Scouts using the camp, some shelter would be needed,” said Anderson. “When they turned to me about a tornado, we sat down and found a solution. Let’s face it, we live in South Dakota and tornadoes are coming through here. “

The Boy Scout Camp management determined how many shelters they needed and asked Anderson to help set up and build two shelters. The shelters themselves are versatile and serve as shower facilities and storage units.

“I always wanted to build an entirely encapsulated concrete structure,” says Anderson. “I built the two buildings in the boy scout camp and thought a concrete house is the same construction principle. I’ve thought about it for many years. “

As such, Anderson is now building a prototype concrete house

“I’m building it as a model home for others to see what can be done. I designed it the same way as the storm structures and when it’s done it will be a fully encapsulated house in concrete. “

He says the prototype of a house will look exactly like a normal wooden-framed house. The exterior will contain stucco stone work and a brick pattern. On the inside, the walls are six inches thick and finished off with two by four frames. The cellulose insulation is blown into the cavities and the walls are provided with rock slabs.

Anderson constructed a retractable roof in a simple truss design. Should a storm occur and the roof blow away, the structure still has its concrete roof and remains viable.

“Concrete houses can be built in areas where hurricanes and tornadoes occur regularly. You could leave this house anywhere and it will still be in place after a severe storm, ”he explains. “If we put all of the damage insurance companies cover together, owners will find that a concrete home doesn’t have the same problems as a traditional home.”

Anderson says there’s a sustainable reason for concrete houses in the market, even if the concept hasn’t quite caught on yet. “It would be unfortunate, but we have to see a tornado in a city for consumers to be aware of it. If you have half a dozen of these houses in a city block and they are the only buildings left, I guarantee people would see the benefits of a specific house and ask questions. In such a case, the people in the house would be safe and the house would still be standing. “

In the meantime, Lance will continue to do what he has done for the last 10 years and run his business successfully. He says he would like to move on to building the concrete cabins.

“South Dakota has a lot of state parks that include log cabins,” he explains. “Over the years these cabins will be damaged and I would suggest replacing them with concrete cabins that could act as tornado protection. It’s a win-win situation for everyone. “

Ed. Note: Lance Anderson was named Contractor of the Year 2015 by the Concrete Foundations Association.

How to align kitchen cabinet doors