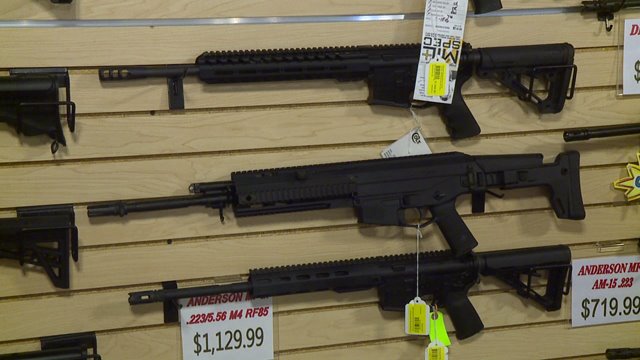 This is an archived article and the information in the article may be outdated. Please look at the time stamp on the story to see when it was last updated.

CASTLE ROCK, Colo. — Get a job, get a gun — that’s the promise of a roofing company at Castle Rock.

The owner of Weatherproof Roofing hopes the incentive of free firepower will attract potential employees. The prize is an AR-15, which can cost $600 to thousands of dollars.

“We have four sales positions that we’ve got to get filled ASAP,” Weatherproof Roofing owner James Webb said.

Webb said he’s in the middle of his busy season. After his “Get a Roof, Get a Gun” campaign over the summer, sales have been through the roof.

“We just don’t have the staff to keep up with it,” Webb said. “So now we’re giving it another shot with ‘get a job, get a gun.'”

People who heard about the job and gun marketing promotion on Tuesday weren’t sure what to make of it.

Those who qualify must pass background checks, Webb said. New sales associates must get 10 roofing jobs on the books before they are eligible to get a weapon.

The Coalition to Stop Gun Violence sounded off about the controversial campaign on Tuesday.

“The only thing roofers should be armed with is a nail gun,” spokesman Andrew Patrick said.

“The addition of guns to an already hazardous work environment only increases the likelihood of an accident or altercation. The gun lobby’s ‘guns everywhere’ mentality has reached a new low when employers feel the need to offer firearms as part of their benefits package.”

Webb insists no one should be alarmed. He said he’s focused on “patriotism and the Second Amendment.”

McHenry Roofing Gets Listed on Porch