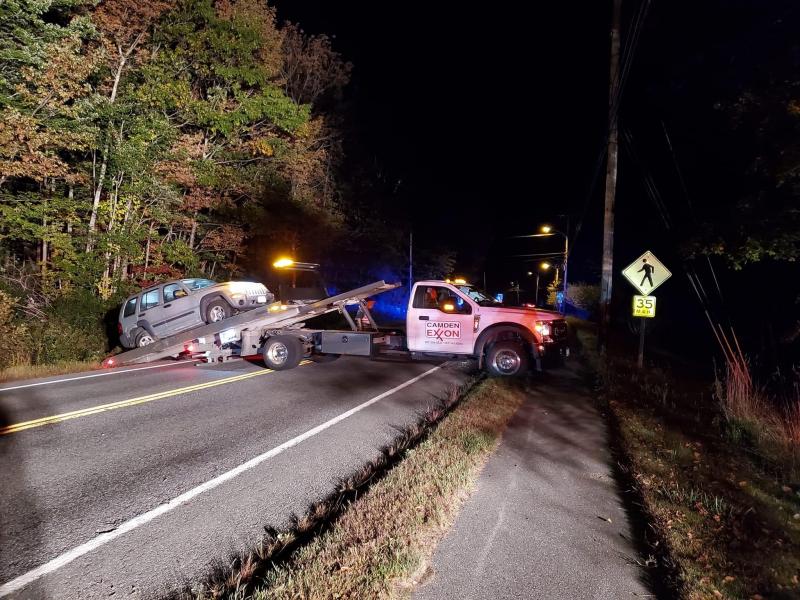 CAMDEN — The first call came in at 2 am, Saturday morning, as a triggered smoke alarm at 100 Mount Battie Street in Camden send area firefighters to a large multi-use building. Camden Fire Chief Chris Farley and Camden Police Officer Troy Bennett arrived at the same time to discover smoke had filled a garage there where car enthusiasts restore classic vehicles.

“We could see through the door, and it was filling with gray smoke,” said Farley.

With the garage locked, Farley broke a window to enter. Meanwhile, mutual aid fire departments of Hope, Lincolnville and Rockport were on their way, as well as a Camden crew aboard Engine 4.

Inside, the hunt was on for the source of the smoke, which was ultimately traced to oil evaporating from a malfunctioning hydraulic compressor. The compressor was running and the oil was apparently leaking, creating heat, and the smoke.

It had not reached the ignition point by the time firefighters discovered the smoking compressor.

Firefighters checked the rest of the building but the smoke was contained to the garage. At the time, there were four cars inside, with a combined worth of $500,000 — an MG, Land Rover, Austin Martin, and one more.

None of them sustained damage.

“We got lucky at 100 Mount Battie,” said Farley. “Early notification of the smoke conditions by the fire alarm prevents hundreds of thousands of dollars in damages to vehicles, medical equipment, the buildings, and saved jobs.”

As Lincolnville Fire Chief Don Fullington III was heading back up Route 1 from the Camden incident he radioed notice to Camden that a Jeep was on its side near the entrance to Camden Hills State Park, and appeared to be leaking fluid.

Farley and firefighters headed immediately over to Route 1 and discovered the Jeep on its right side, with no driver or passengers in the vicinity.

The Jeep had apparently been heading north, when the driver went off the road, overcorrected, spun around and landed on the southbound side of Route 1.

Just as Farley arrived, the driver was returning in another car, having been given a ride after walking home with an injured ankle.

Camden Exxon towed the Jeep away, and the leaking fluids turned out to be minimal, said Farley.