Building a Pool in South Florida Has Changed 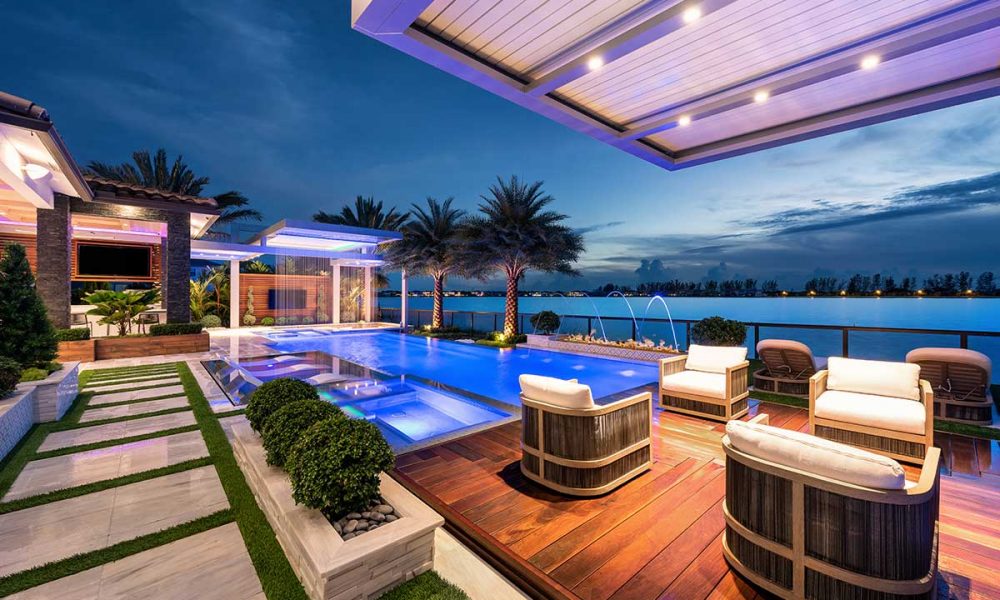 Scott Payne knows a few things about making brand ambassadors out of his pool of customers. As one of the leading pool builders in Pennsylvania, he says he considers it his personal priority to make sure that his customers are happy with the end product.

His company Scott Payne Custom Pools is a local fixture in Montgomeryville which is located roughly 40 minutes between Allentown and Philadelphia as the crow flies. Word-of-mouth referrals are important to the builder who says that when it comes to the backyard, his clients are looking for a firm that does it all.

“Over my career, I saw the disconnect with some of the companies I worked for in the industry. We set up the model of Scott Payne Custom Pools to be different. When you’re expecting a client who is spending a lot of money with you to GC their own project, that never ends well. So we vertically aligned with carpenters, landscapers, and hardscapers. We created a very good sub-base,” said Payne, “now most of that work is in-house for us. We employ Scott Payne Outdoors as our sister company and have four full-time carpenters in that company. We have landscape, hardscape and fencing in-house, with a landscape architect on staff. There’s a benefit to it, and the customers appreciate it. They want to write one check to one person,” said Payne.

Being a one stop shop

Being that all-in-one solution for the homeowner means that quite often, Payne is handling every aspect of the backyard renovation. This goes for everything from the swimming pool, to the hardscaping, to the landscaping, to all of the carpentry that goes into building the various outdoor amenities his clients are looking for. “When clients call, they ask, ‘You do everything, right? Yes, ma’am. Good, that’s what we want.’ and it just reinforces the decision for them,” said Payne.

Payne said that being that one-stop shop is what his pool customers are looking for nine times out of ten. “I have a silly rule, and that is if someone asked me more than three times for something, I explore it just to see what it would take to become fluent in it,” said Payne, “for example, we do sports courts. Now we’re one of the top distributors on the East Coast for Versa Court. We do X Grass for putting greens. Now we do Danver outdoor door cabinetry. There’s just such a benefit to being that person and having all that in our back pocket. We’re a Generac dealer and do generators. Why? People ask for them or they had bad experiences with their existing contractor. They complained about it. So we got licensed. We’ll do 50 to 60 generators this year. It makes sense. We’re already there. We have an electrician there, and we have a gas guy there.”

For Payne, the path to becoming a top pool builder would mean educating himself on what he’d need to learn to make a difference in his own local market. That meant taking the time to take classes that would make him a better builder. “I made a promise when I started the company to forget everything I thought I knew,” said Payne, “I was taught things when I worked for a national builder who was very high volume. Everybody had the same sentiment and that was how it was always done. Their process never factored in if it was right or wrong or justified.”

“I developed a relationship with Kevin Ruddy from Omega Structures. And at the time he was entrenched in Genesis with Skip Phillips and Brian Van Bower. We had this amazing friendship and he kept telling me to come take a class,” explained Payne.

“I just thought it was such an oxymoron because everything that this company stood for was not what Genesis stood for. There was just no sense in doing it their way because it was going to benefit me, but it was never going to trickle down to my customer. Literally, I think the day that I started my company, I called Kevin Ruddy and I said, hey, I’m ready,” said Payne.

“He connected me with the office at Genesis. The first class I took was in October of 2015 in Baltimore, Maryland. It was a pool studio class at a Master Pools Guild event. So it’s a very nice hotel and I didn’t have a laptop. I did my pool studio on a desktop. I literally dragged my CPU down there with my monitor, my keyboard and my mouse. And I walked into class the first day and it just brought looks and laughter, but I set it up on a table where everybody set their laptops up, and that was it. I was hooked. And I’m very proud to say that I completed my SWD. 150 hours of education all over the country inside of two years,” explained Payne. 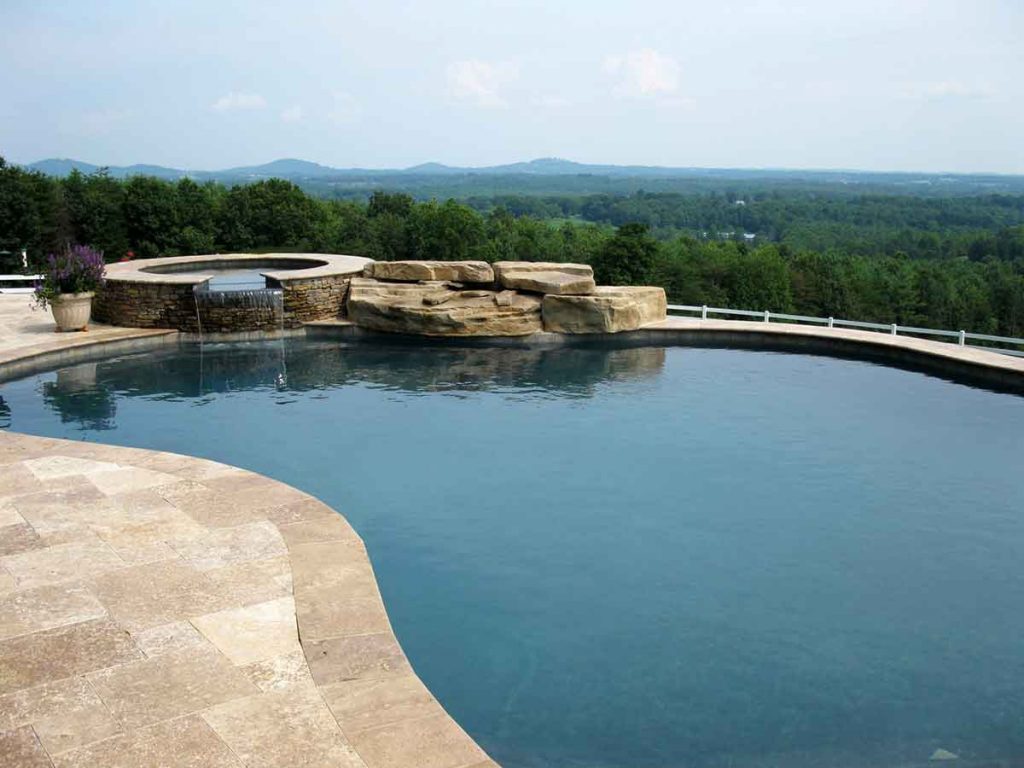 Payne said that getting that education was key for him simply because building pools in Pennsylvania can be difficult at times. That education often comes into play when it comes time to educate the customer about what is involved with building a pool. “I think the consistency of state, county, and township regulations do not exist in Pennsylvania. It’s a state where every township has its own set of rules. We build in probably 40 townships in a 75 miles square area. Each has different rules and regulations. I have a full-time person where all they do is handle permits. They expedite engineering, download and fill forms out. It’s all they do every day.”

Other than the permitting concerns are the restrictions that come with building an inground swimming pool. “Stormwater management has become very prevalent in the past ten years. In almost every township it could cost the customer an additional $5,000 to $15,000, depending on how big the devices are,” said Payne.

While the pandemic spurred a tremendous increase in outdoor living improvements, rising costs are also something Payne said he has to frequently contend with. “When it comes to price increases, there’s a sadness to it. I have to be honest, we had a base price pool that we sold all day, every day. Pre-Covid that base pool was $59,000. The base price of that pool today is $84,000. It’s at the identical margin and we’re not making a penny more on that pool,” said Payne, who said it’s his unfortunate duty to break the news about what pools cost these days.

It’s also incumbent upon him to educate consumers about the pool-building process. “The process is horrible. It’s like a hip replacement,” explained Payne, “the client says, ‘I don’t want to go to PT, I don’t want to be in a hospital, but I want to dance.’ So I’m going to come in, I’m going to tear your yard up for six weeks, six months, hopefully not six years, right? But you’re going to have that first party and you’re going to remember Scott Payne Custom Pools. That’s why I do this,” said Payne.

Making every customer happy is the goal, even when things go awry, said Payne. “I think I was in business about two years and I was called out on a job for a woman named Rachel. She gave me her budget and her wish list. The number she threw out was not going to get this done. I politely start to excuse myself and say, listen, you’re probably more of a vinyl pool client than a gunite pool construction. She gets upset and I listen to her. She says, ‘I went through this hard divorce, and want to build a swimming pool for my kids, you’re going to be the builder.'” said Payne.

“I pictured my mom with my sister and me, struggling. So I said, okay, you know what? That budget, can you stretch it? And she said, ‘Yeah, I can stretch it.’ And I said, okay, ‘I’m going to bend. You stretch, I bend and we’re going to do this together,’” said Payne.

The project, which was one of Payne’s first, had its inevitable hiccups. One Payne counts as a costly lesson in doing the right thing when it counts. A few weeks after starting construction of the pool, Payne would hear back from his customer with an urgent concern. “I think it has something to do with the pool she said,” Payne explained, “the toilets are all backed up and I think you hit the sewer line. I walk through her backyard, and I walk through the neighbor’s yard, and I walk another yard over and guess what I find? A sewer line that goes right through the middle of the pool. The sewer line is leaving the basement at about seven feet deep. It’s under the pool. My excavator more than likely nicked it. Gunite comes in and shoots over it and concrete just seened into the pipe,” said Payne.

“There’s a Marriott around the corner. I get them a room, and call my excavator,” said Payne, “I said, ‘can you do me a favor and bring the mini X and meet me at that job? He and I, over the next five or six hours dig down the front side of this pool to find the pipe. Sure enough, it’s broke.”

“We find the break. Now I have to make a decision, do I fix it or do I move it?”, said Payne, “The pool is parked on top of this pipe. I do the right thing. We dig all the way around the deep end of the pool and demo the equipment that was already set. We connect it, if you can imagine, like a question mark to the other side to the lateral going three yards down. We dig the hole, plumb it, put in cleanouts and get it inspected and backfilled. We reset the equipment, which is now junk. We redo all the plumbing, paid for that twice. We tiled, coped, and put the deck on the pool while still completing it in 28 days. It cost me $8,500 for that mistake but that story sticks out to me as a win, as setting the expectation at that point that we’re going to do things the right way, because it’s not about money. It’s about integrity.”

Home Works Painting, Top Painter in Herndon, VA, Has Been Recognized For its Quality Painting Services