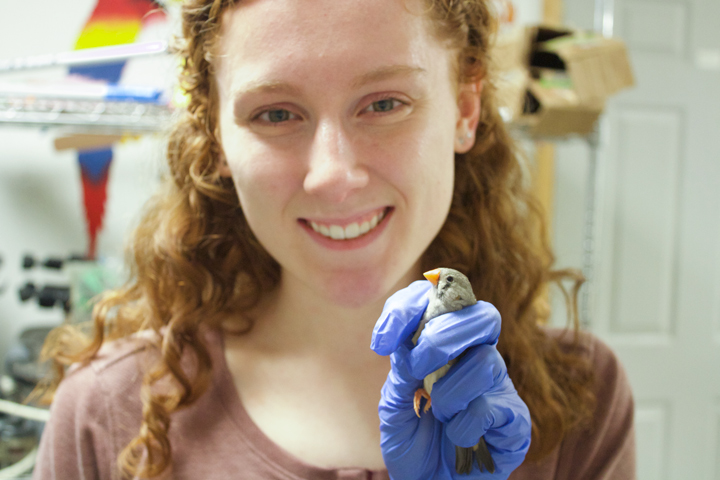 Most people have seen it: a bird on the floor under a window, stunned, splayed, dead or dying.

John Swaddle cites studies that say up to a billion birds are lost to window strikes every year, adding that many of the measures taken to reduce window collisions are not aesthetically pleasing and often ineffective.

Swaddle is the Faculty Director at William & Mary’s Institute for Integrative Conservation and Professor in the University’s Department of Biology. He and a group of PhD students in biology have published an article evaluating a new window film product for reducing bird-to-window collisions.

The paper “Ultraviolet Reflective Film Applied to Windows Reduces Collision Chances for Two Species of Songbirds” was recently published in peerJ, the peer-reviewed open access journal. It is the first paper from the IIC, a new initiative at William & Mary. Swaddle’s co-authors are Lauren Emerson, Robin Thady, and Timothy Boycott.

The paper reports on the group’s analysis of BirdShades, a commercially manufactured window treatment used to reduce bird collisions. However, the co-authors say their improved experimental methodology is probably the more important contribution. Swaddle has been dealing with the problem of bird structure collisions for years. He is one of the founders of Sonic Nets and Acoustic Lighthouse, initiatives that provide possible solutions to problems encountered in bird-human relationships.

“BirdShades is a small startup in Austria,” said Swaddle. “You reached out to me a few years ago when you were thinking about how to get into the window collision business.”

He said he served as an informal advisor to the company and when BirdShades had a prototype product they needed an outside party to test it and Swaddle’s team was available.

BirdShades is an adhesive film designed to be applied to window glass. It is advertised as invisible to humans, but its ultraviolet reflective nature appears solid to birds. Swaddle’s group found that windows treated with BirdShades reduced the chance of window collisions by 75 to 90 percent in certain tests.

The numbers are impressive, but it’s complicated. Swaddle said the group’s contributions were more nuanced – and valuable – than those numbers suggest. The BirdShades tests gave them an opportunity to refine and improve the standard method for window stroke studies.

“One of the big problems with people testing window products is that they were mostly doing it in the dark,” he said.

The usual method for testing the bird-window relationship involves a large, dark container, Swaddle said. Often it is a converted shipping container. The researchers cut a few holes in the other end and installed windows. Then the birds fly through the dark container to the lighted windows to be captured unharmed in a fog net before they mourn against the targets.

“This reverses the whole lighting situation compared to the usual scenario where a bird is flying through your yard and hitting the window of your house,” he explained. “Because in this situation the bird flies in broad daylight and hits a window behind which there is a more or less illuminated artificial light. And people didn’t test birds in that situation. “

Furthermore, he said, the standard method for opening windows uses a “forced choice” paradigm: the bird flies towards a pair of windows; One area is treated and the other is the untreated control window.

The group originally included forced-choice scenarios in their BirdShades tests, and then found that such an artificial scenario was not life-like.

“If a bird is in danger of flying into your garden window, it is not because one window is being treated and the other is not. Either you have window treatments on all the windows in your house or you don’t, ”Swaddle said.

In other words, the forced choice is a wrong choice. The group suggested in their paper that the forced selection method was at least partially responsible for the promising numbers, which suggest a 75-90 percent reduction in strikes on BirdShades-treated discs.

“We found that this artificial choice that birds have made from other testers is not particularly appropriate,” said Swaddle. “The comparison you have to make is when the birds are facing windows that have all been treated with film versus a situation where not all windows are treated with film.”

The group set out to abandon the dark tunnel / forced choice paradigm, starting with the redesign of the flight tunnel. Boycott took the lead in setting up experiments, saying he wanted to keep one aspect of the dark tunnel design: birds were naturally drawn to literal light at the end of the tunnel when they were released.

“I was interested in harnessing this natural tendency in bird behavior,” said Boycott. “So we started building a flight corridor, the first half of which was darkened. You would let go of the bird and it would still be flying towards the light. “

The second part of the corridor is lighted for a more lifelike experience. After completing the side-by-side tests, the group performed a second set of tests. The experimenters eliminated the forced selection scenario by installing the same types of glass in both panes and recording how the birds reacted in separate experiments with BirdShades versus regular glass. The researchers used GoPro cameras to record the behavior and speed of birds. They also noticed birds that avoided the windows entirely.

Emerson said they used two species of birds. One species was the zebra finch. Zebra finches are domesticated and adaptable. Often used in bird experiments, they have a vision that detects the ultraviolet reflection that forms the basis of the BirdShades effect.

“We also wanted a wild bird,” she said, “something that is plentiful in the area and relatively easy to catch. We discovered that this is the brown-headed cowbird. “

They were able to secure more than a dozen cowbirds, and Emerson said the wild cowbirds do very well in captivity. In all of their tests, the group saw a decrease in the birds’ speed as they approached the treated windows.

Swaddle points out that speed is important. A bird striking a window at twice the speed of another will chalk a kinetic splat that is the square of the slower bird. If a bird has a chance to slow down, it has a much better chance of survival.

“I think an interesting finding is that we saw that this reduction in the cowbirds was not as severe as it was in the zebra finches,” said Thady. “We spent some time speculating about it.”

They found that the BirdShades jar worked, but the effect in their more realistic full control trials compared to all treated trials was consistently less than in the forced choice experiments. If the birds did not have to choose a disc, around 50 percent of the zebra finches and 30 percent of the brown-headed cowbirds showed that they would avoid the BirdShades glass.

These figures are comparable to the situation of forced choice in “side-by-side” trials, in which avoidance results of around 90 percent in zebra finches and 75 percent in brown-headed cowbirds were recorded.

Swaddle says he intends to continue his bird collision research and hopes to continue developing more effective and relevant research methods. He said he was pursuing an investigation route that would involve placing sensors on windows, which attract a lot of bird strikes.

“The standard way for people to collect data on bird collisions is to walk through the buildings in the early morning and count how many dead birds are on the ground,” he said. Sensors could count the birds that jump and survive, and the right sensor could even log the force and identify the bird type, or at least its size, he said.

“We could get better information on how common bird collisions actually are,” said Swaddle. “Until we have good data on the collisions themselves, we’re not going to test damage control products very well in real situations.”

Currently, there are a number of remedial measures that people dealing with window knocks can take, some of which are more effective than others. Swaddle said that in addition to new generation film treatments like BirdShades, there are existing film products that usually have a visible stripe or darkening pattern and have shown some. However, he does not recommend window stickers.

“The decals that seemed popular with some people were the kind of silhouettes of animals or birds,” he said. “They don’t tend to work partially because they’re generally too far apart. And they do not give the birds good information visually. So I would recommend avoiding these. “

Ms. quotes £ 1k for a new kitchen floor renovating it herself for only £ 45 with frogtape and gray paint