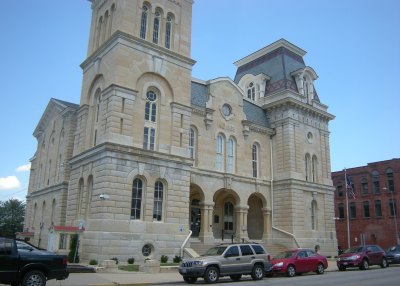 The commissioners unanimously passed an ordinance Tuesday morning to authorize over $23,000 in American Rescue Plan Act funding to pay White & Borgognoni Architects of Carbondale for assessment of the windows that occurred this summer at the Morgan County Courthouse.

Commissioner Chair Ginny Fanning says they’ll now begin seeking bids to get the windows replaced: “Mr. White was on the lift with another gentleman this summer taking pictures of all of the windows, and now has all of the plans ready so that we can proceed with finding some possible vendors.”

Fanning says the window replacement is sorely needed. A few of the offices reported during the most recent winter weather snow coming in around the windows into offices. Fanning says the project will help save money: “The [new windows] will be more energy efficient and they will help to keep the courthouse looking good.”

Fanning says the new year will have a few more capital improvement projects from the county’s allocation of ARPA money: “We are thinking that our ARPA funds will have some go towards the Morgan County Jail’s security and lock system’s replacement, and the HVAC system updates over there. We’re hoping sooner than later that there will be some new courtroom lighting upstairs on the second floor.”

In other county business on Tuesday morning, the commissioners passed other general fund bills coming in just over $92,000. They also passed appropriation of funds for the payment of County Engineer Matt Coultas’ salary. The county fits into a special annual program where half of the county’s obligation to the county engineer’s salary can be paid through the county’s motor fuel tax fund. Morgan County is responsible for $70,560 of the county engineer’s salary which totals $117,600. Scott County is responsible for the rest in a memorandum of understanding between the two counties as they share Coultas as their highway engineer.