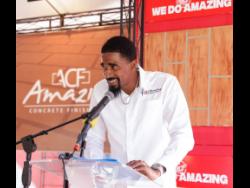 It took more than a decade for Amazing Concrete Finishes Jamaica to expand beyond Kingston to its second outlook in Montego Bay, but it’s already looking to extend its footprint beyond Jamaica to six Caribbean markets in three years, bolstered by cash from two backers.

Amazing Concrete deals in decorative concrete finishes. It started out as a ‘mom and pop’ operation in 2011, and developed its expertise over time in the areas of stamped concrete, cementitious overlays, stained concrete, artificial rocks and waterfalls, epoxy floors and polished concrete.

Its expansion to Montego Bay last weekend has created a pathway for the company to enter a new service area, ready-mix concrete, a segment that Sharpe says is heavily saturated in Kingston.

“It has always been my vision to get into the ready-mix concrete market because it’s a space that allows for creativity. There’s lots of competition for that market in Kingston, but Montego Bay has room for more players given that it’s a growing city,” he said in an interview with the Financial Gleaner.

For the Montego Bay operation, the company has leased a two-acre property at Lower Bevin Avenue, on which it has set up a 400-square-foot facility, showroom and ready-mix plant. The size of the investment was not disclosed.

In Kingston, Amazing Concrete’s operation is spread across three leased locations that accommodate its showroom, office and warehouse, but Sharpe intends to acquire a half-acre property in the coming year and consolidate the operations.

“We have already put in offers for two properties, and hopefully we will secure one by December. Once that process is completed, then we will move to construction in 2023,” he said.

Sharpe is also scouting land for lease in Guyana, a country that is now bustling with business from his recent oil find. It’s target market for Guyana remains the same, residential customers and multinational corporations looking to set up hotels.

Sharpe is optimistic that the company will secure a property in Guyana by mid-2023. Thereafter, Amazing Concrete will scout land locally in Mandeville for its third Jamaican location.

Its other regional targets include Trinidad and Tobago, Belize, The Cayman Islands, St Kitts-Nevis and the Dominican Republic.

“We are already in discussion with partners in Trinidad and Tobago. They are in the same line of business,” said Sharpe. “As for the other countries, our intention is to set up a facility and test the waters,” he said.

The residential market accounts for 65 per cent of projects undertaken by Amazing Concrete Finishes, while the other 35 per cent is business from commercial customers.

It’s entire expansion plan is centered on getting the company more commercial projects. Sharpe wants to switch those numbers around by 2025.

The company’s expansion program is expected to shift beyond the Caribbean at some point, starting with Florida.