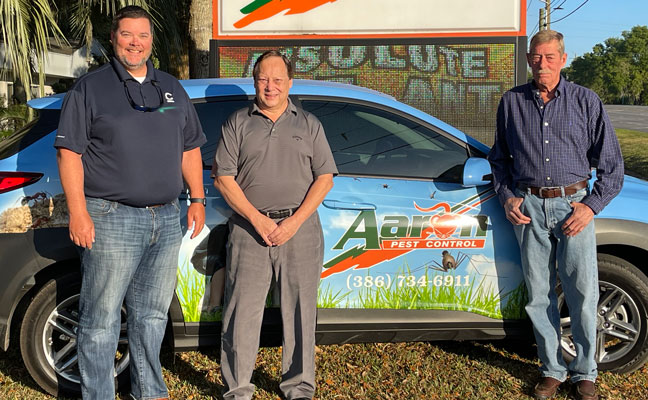 Certus Pest, based in Orlando, Florida, has acquired Aaron Pest Control, DeLand, Florida. Jim and Laverne Smith founded and expanded the company in 1963 to serve residential and business customers across central Florida. Terms were not disclosed; Rand Hollon of Preferred Business Brokers represented and acted as exclusive financial advisor to Aaron Pest Control on this transaction.

Second generation owner Phil Smith stated in a press release: “Since I took over the helm of Aaron Pest Control, I have remained true to my parents’ commitment to putting their people first. When looking for the company to be entrusted with our family business, this commitment was the top priority. I had to be confident that my team was in good hands and that all promises made to them would be kept in transition. “

In 1996, CEO and co-founder Mike Givlin founded Bird Control International, a successful company that was acquired by Steritech in 2007. Givlin was Vice President, North American Bird Program and Special Projects at Steritech for more than nine years. As Vice President of North America at Anticimex from 2016 to 2018, Givlin played a key role in the Swedish company’s entry into North America and contributed to increasing acquisition-oriented growth to over 100 million US dollars in sales.

During a brief hiatus in the industry, Mike began to come up with the idea of ​​partnering with like-minded pest control entrepreneurs to support their growth endeavors with both capital and world-class expertise. In 2019 Mike partnered with Imperial Capital, a medium-sized private equity firm based in Toronto, Canada. Together they founded Certus and planned a new platform for collaboration with leading pest control companies in the USA and Canada. Certus currently operates in California, Georgia, Washington, Oregon, Florida, Idaho and Arizona.

7 Hot Stocks To Buy For A Consumerism Blast