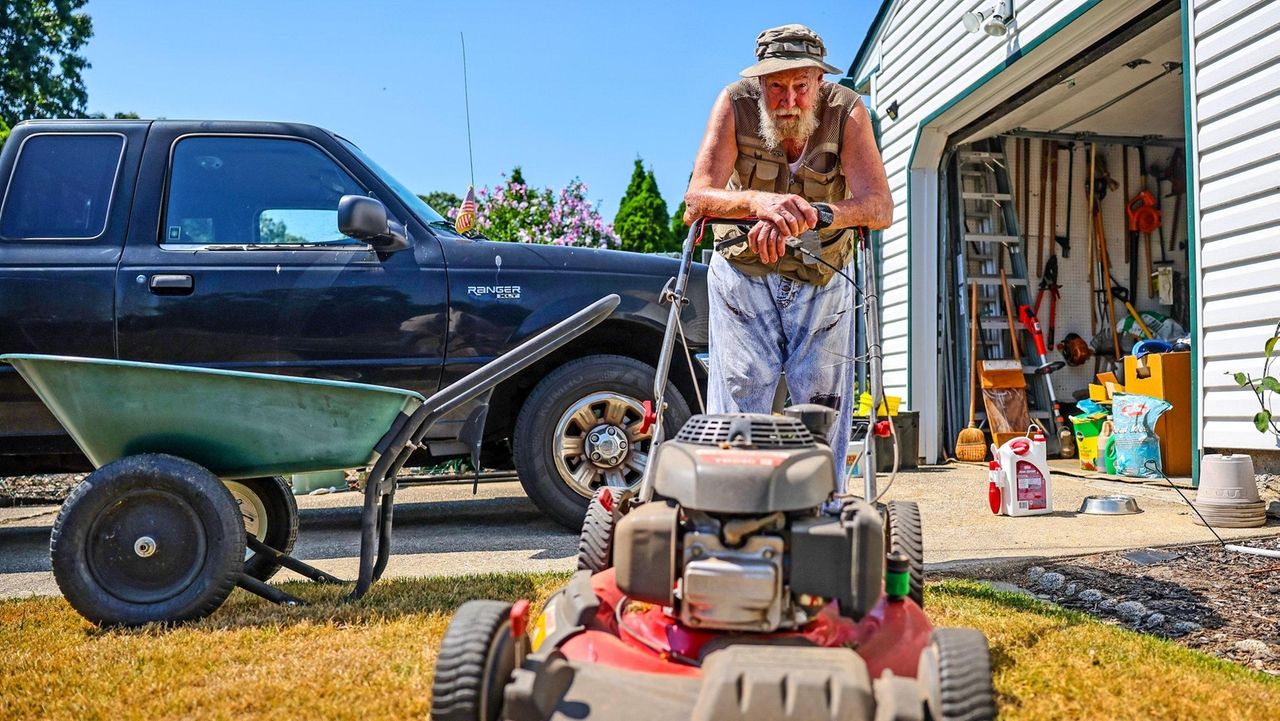 Long Islanders may be growing accustomed to warmer temperatures due to climate change, but the inevitable chill of autumn eventually closes the gap come October. Although it might seem like there’s plenty of time for fall projects at this point, it’s better to start them as soon as possible. Delays could mean cold-weather headaches.

Install a backyard pool or hot tub for owner enjoyment, not resale…

Install a backyard pool or hot tub for owner enjoyment, not resale…

With that in mind, we asked some experienced do-it-yourselfers for tips on handling some important home projects in the fall, from closing an above-ground pool to prepping the garden for next spring to winterizing an outboard engine.

Gerald Calandrillo closes up the above-ground pool at his Wantagh home before cold weather sets in. Credit: Debbie Egan-Chin

Nothing says “summer’s over” more than closing a pool for the season. While heated in-ground settings allow a few extra weeks of fun, above-ground pools should be closed soon. It’s a simple process — but wait too long and you’ll have a chore come spring.

For 30 years, Gerald Calandrillo, a retired butcher, closed his 24-foot round, 4½-foot-deep above-ground pool in his Wantagh backyard just after schools reopened. But last fall, he waited until late October. “By then, the water was completely green,” said Calandrillo, 73. “I’ll never make that mistake again.”

The task begins with finding help to position the woven, soft-plastic-tarp style cover because it’s large and heavy and can’t lie in the water before being pulled tight as it will be heavy if wet. For that, he depends on his wife, Kathleen Calandrillo, 68, a retired office manager, and help from neighbors.

To prep for winter, Calandrillo lowers the water level slightly and places a metal plate over the skimmer to prevent leaks. He then disassembles the filter, cleans it with a filter cleaning spray that costs $10, and pulls on the cover. “I don’t add special chemicals, so the procedure costs almost nothing,” he said. “Once the cover is positioned, just secure the straps.” Then he forgets about the pool until spring.

Mulch that bed of roses

Ask anyone living on South Dunton Avenue in East Patchogue who has the best roses, and they’ll point to Sean Tiedemann’s house. The retired owner of a police-security-military equipment business has 150 bushes, and each looks spectacular thanks to some fall season TLC.

“I had 200 bushes, but I’ve cut back a little,” said Tiedemann, 80. “Still, taking care of those roses is my big fall project. Fortunately, I have my dog, The Dutchess, and great neighbors, to lend a hand and offer encouragement while I get everything done.”

Tiedemann attributes much of his rosy success to refraining from trimming bushes after the first frost of fall because pruning signals plants to grow, and that can damage them as winter arrives. Instead, he trims after the last frost of winter. He also covers the roots of each plant with at least 3 inches of mulch to provide warmth as temperatures drop, which also means he doesn’t have to wrap the bushes in burlap.

Tiedemann, who spends about $60 on 20 2- to 3-cubic-foot bags of mulch, advises mulching roses when you first hear “frost” in weather forecasts. “To save money, take advantage of mulch sales throughout the year at garden centers and home improvement chains,” he said. “Store mulch under a tarp so it stays dry, because wet bags weigh up to 70 pounds each.”

If you own a big boat and new four-stroke engines, it makes sense to have your vessel professionally serviced each fall. Many Long Islanders, though, have smaller crafts with older motors they can winterize themselves.

“That’s especially true with two-stroke engines,” said Matt Martin 65, of Sayville. The longtime boater and design engineering consultant shares his love of the water with his wife, Anne Martin, 64, an author and retired speech pathologist and special education teacher. The Martins own a 20-foot 1987 Privateer with a two-stroke 115-hp Yamaha 2000 engine.

Martin also suggests draining some oil from the engine’s lower unit to ensure it looks pristine. “Milky or cloudy oil indicates water getting inside the lower unit, which leads to corrosion,” he said. “It’s best to see an engine mechanic if that’s the case.”

Jermaine Owens hassts tomatoes in his Southold garden as he preps it for next spring. Credit: Randee Daddona

“We love gardening,” said Jermaine Owens, 45, who fillets and sells fish for a living and lives with his wife, Danielle Cullen, 36, a bartender, and daughter, Rylee Owens, 13, in Southold. Together, the family works hard to ensure their veggies and herbs sprout fresh and strong each spring, which requires prepping the soil in their 12-by-6-foot garden boxes each fall.

“We grow corn, blackberries, strawberries, peppers, tomatoes, bok choy and lettuce, plus basil and rosemary,” Owens said. “It’s healthy and fun to have so many fresh choices.”

It’s the seafood angle that makes Owens’ garden lush. He saves fish heads and skeletons to enrich the soil. “I freeze some each summer and bury them when I turn the garden in the fall,” says Owens. “That gives the fish time to break down. By spring, our dirt is rich, refreshed with nutrients and retains moisture, even during dry spells.”

Jermaine Owens adds fish and kelp compost to his Southold garden to prep the soil for next spring. Credit: Randee Daddona

For Owens, the process costs nothing but time. If you don’t fish, he suggests asking friends who do to save you some fish parts.

“Serious gardening takes hard work, so be sure to also set up an area to relax and enjoy watching your plants grow during down time,” suggests Owens, who recently spent $1,000 to create a 25-by-15-foot crushed bluestone gravel sitting area with a table and chairs in his garden. “It complements the garden and provides our family a nice place to chill,” he said.

Build or mend a fence

Gary Lynott, a retired golf-course irrigation salesperson, is a measure-twice-cut-once kind of person who shares some simple rules he says will save any do-it-yourselfer aggravation.

“For home projects in general,” advises Lynott, “it’s important to have the right tools before getting started. Lacking a major one — or several — hints your task might be better managed by a pro. Additionally, take time to carefully spec things out. Address those points early and you’ll have few headaches.”

Lynott, 68, who lives with his wife, Nancy, 66, a retired social worker, followed his own advice recently when he built a 200-foot-long board-to-board fence in their backyard in East Quogue.

“There’s plenty to consider with fences, starting with identifying property lines, sinking each post to the proper depth, and ensuring all is level,” he notes. To save money and recycle good material, he used existing posts from his stockade fence, releveled them, and screwed 2-by-4 joist hangers into the posts to hold three support rails per set. He placed 6-foot-tall, 5¼-inch wide pressure-treated planks 4 inches apart, securing them to support rails with a pneumatic nail gun. The project cost $2,300 in materials.

“For home projects in general,” says Lynott, holding a nail gun he used on his fence, “it’s important to have the right tools before getting started. Credit: John Roca

Lynott replicated the plank pattern on the opposite side of the rails so alternating boards overlap to fill the gaps. This arrangement allows more ventilation than a solid stockade fence and has pleasing depth, he said.

Even for Lynott, though, fall projects can fall behind schedule. “Figure tasks to take longer than expected,” he said with a chuckle. “I could do this one in a week, but it took two months because I had to tear down my old fence and do some traveling. Plan ahead because life gets in the way.”

Painting or Staining a Fence: Which One’s Better?

Install a backyard pool or hot tub for owner enjoyment, not resale value